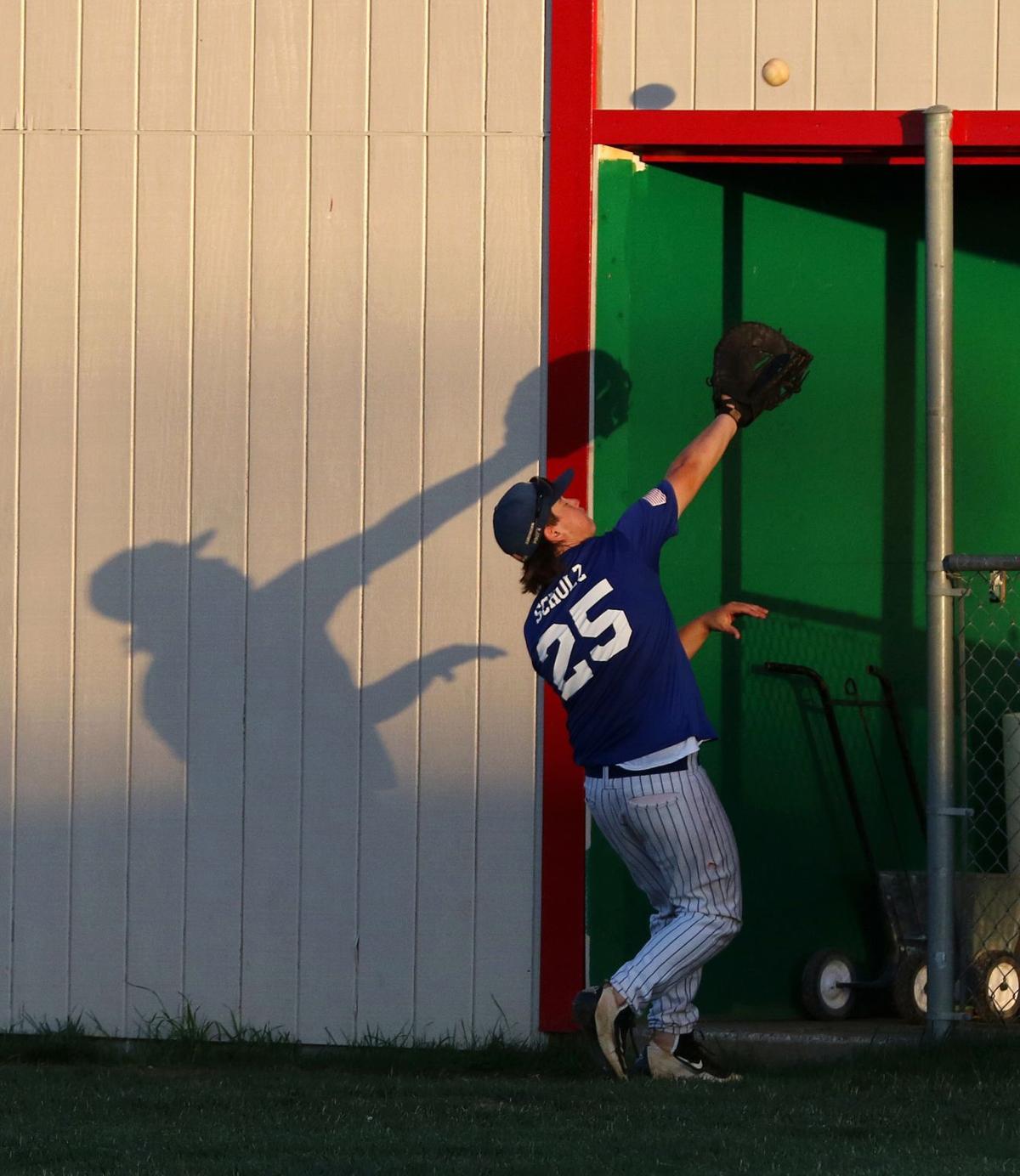 Atchison’s Augie Scholz reaches for a foul ball Thursday night against Sabetha. The ball bounced off the dugout before Scholz could make a play on it. 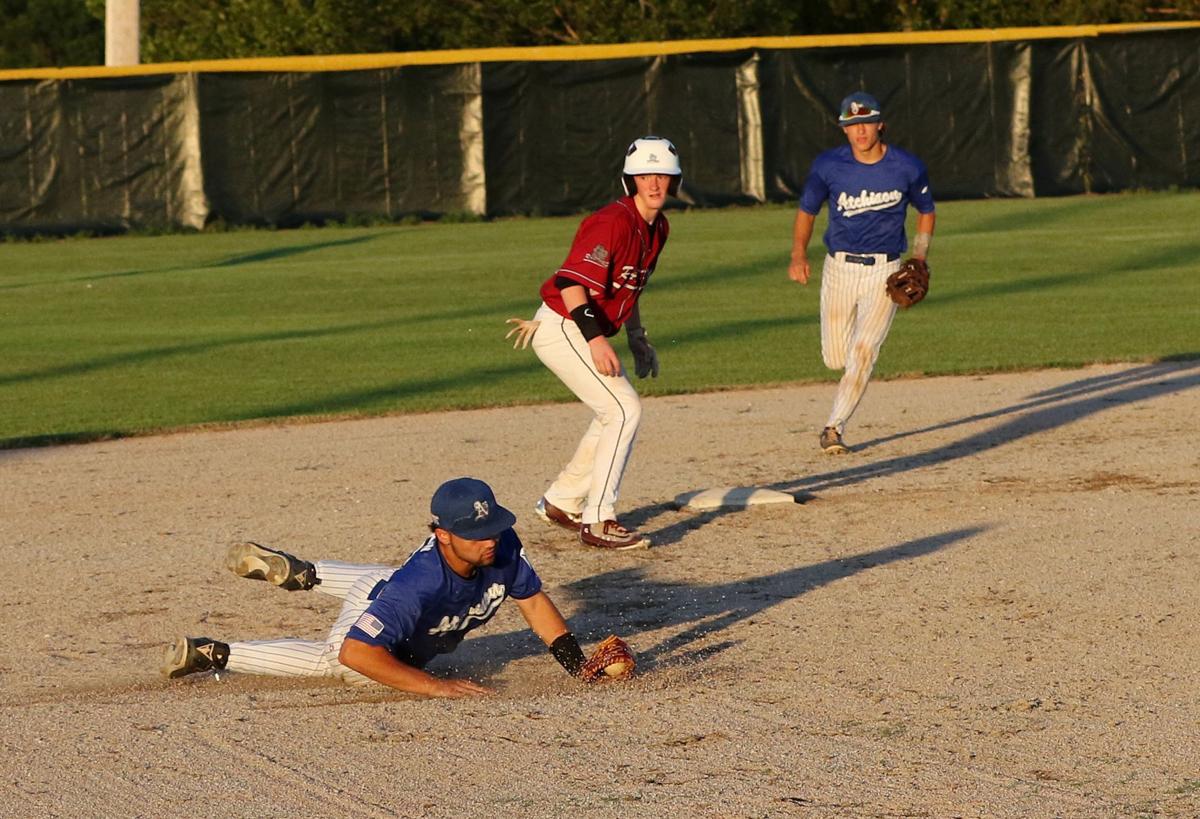 Marcus Denton makes a diving stop for the A’s on Wednesday night. Sabetha swept Atchison in the A’s final regular season games before the zone tournament.

Atchison’s Augie Scholz reaches for a foul ball Thursday night against Sabetha. The ball bounced off the dugout before Scholz could make a play on it.

Marcus Denton makes a diving stop for the A’s on Wednesday night. Sabetha swept Atchison in the A’s final regular season games before the zone tournament.

The Atchison Senior A’s suffered a doubleheader sweep at home against the Sabetha Raptors in the final games before next week’s zone tournament.

The A’s hung with Sabetha for most of Game 1, but a big inning by the Raptors was too much for Atchison to overcome.

Sabetha went into the fifth inning leading 5-3, but scored eight runs to put the game away. Augie Scholz was the starting pitcher for Atchison, but was removed after giving a lead-off walk in the fifth.

Hunter Wahwahsuck replaced Scholz, but Sabetha went on to force four more walks and record five hits in the inning.

Adam Smith singled in the bottom of the fifth and was driven in by Logan Wahwahsuck. That was all the A’s could muster though, losing by run rule.

Sabetha grabbed a two-run lead in the top of the first against Scholz, but Atchison responded. Smith drew a walk, stole second and third and then scored on Wahwahsuck’s single to cut the lead to 2-1.

The Raptors plated another run in the second and two more in the third to take a 5-1 lead. In the bottom of the third, Marcus Denton worked a walk and scored on Wahwahsuck’s double. Wahwahsuck finished with three RBIs in the game.

The A’s pulled closer in the bottom of the fourth. Scholz ripped a double into right field and moved to third on Jaden Lee’s sacrifice bunt. Kevin Scott brought Scholz to the plate with a single. Sabetha’s lead was down to 5-3, but the Raptors scored eight the following inning to put the game away.

“We had good plate appearances,” said Coach White. “We didn’t hit the ball all that well, but we did hit the ball – didn’t strike out much – and that’s good to see going into zone.”

The second game was much like the first, as Sabetha grabbed an early lead before the A’s closed the gap only to watch the Raptors finish strong.

Scott took the bump in the first inning for Atchison. The first four Raptors reached and scored, but Scott was able to work out of a bases loaded jam to limit the damage.

Smith took over pitching duties and held the Raptors scoreless in the second and third innings.

In the bottom of the third, Scholz and Scott singled, Denton walked to load the bases and Smith drew a walk to bring home Scholz. Hunter Wahwahsuck drew another walk to score Scott and the A’s trailed 4-2.

Sabetha answered right away, though, scoring three runs off Smith in the fourth, and one more in the fifth.

Denton singled and scored on Smith’s double in the bottom of the fifth, but the Raptors held an 8-3 advantage.

Logan Wahwahsuck pitched a scoreless sixth inning and got two outs in the seventh, striking out three batters and giving up two runs.

Smith singled again in the bottom of the seventh, stole second and third and scored on a throwing error, but Atchison lost 10-4.

Despite the losses, and being without three regular starters, the A’s had a positive attitude throughout the doubleheader.

“Their attitudes were really good,” White said. “Once again, it comes back to not having all your players here, but they did what they could do.”

Next up for Atchison is the zone tournament. The A’s play Oskaloosa at 6 p.m. Monday, July 18 at Ottawa. The other first round game features Ottawa and Leavenworth. Two teams will advance to the state tournament in Garden City. The winners of Monday’s games will play at 8 p.m. Tuesday, July 19, while the losers will play an elimination game at 6 p.m. Tuesday.