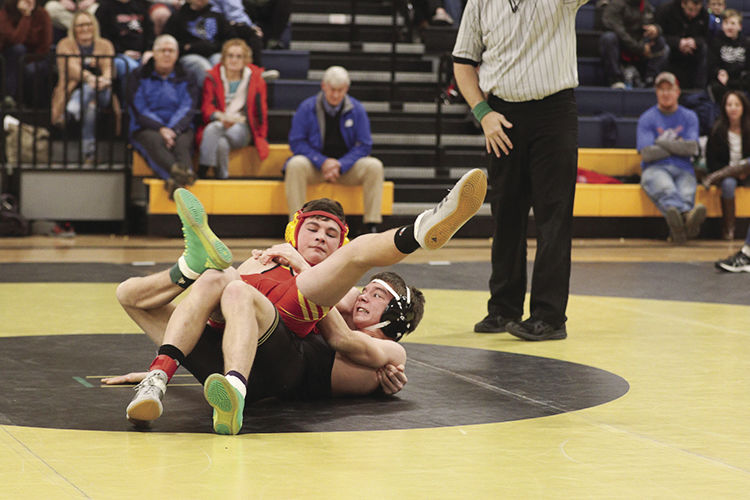 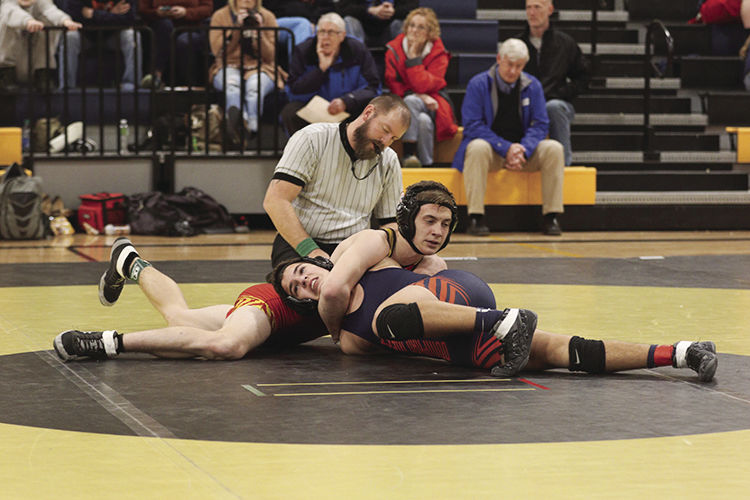 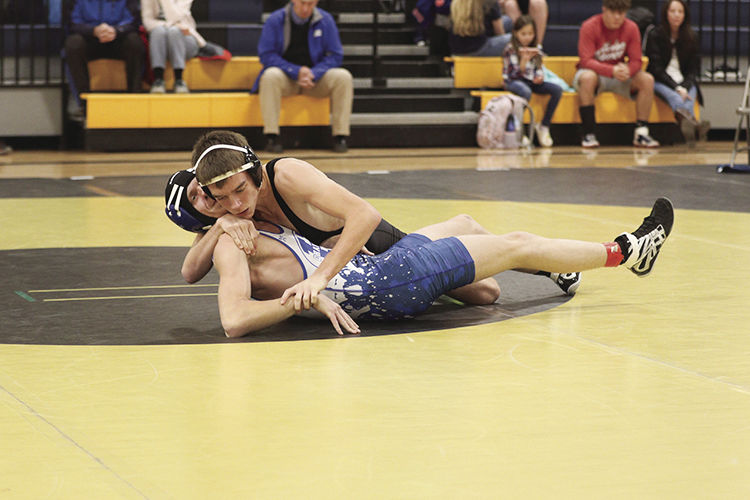 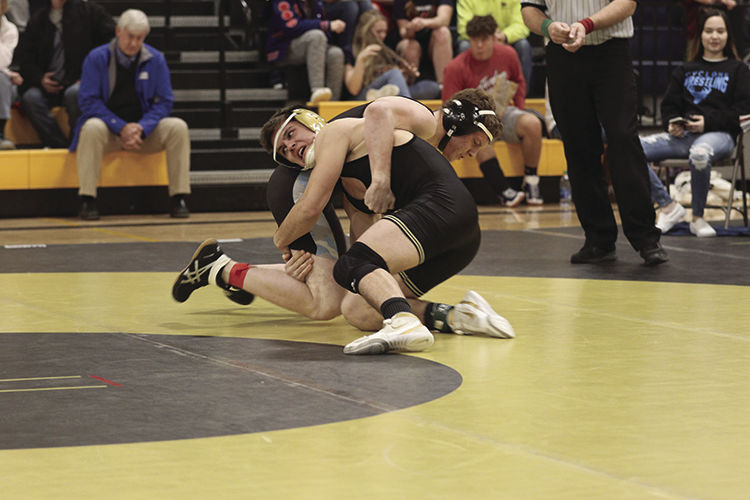 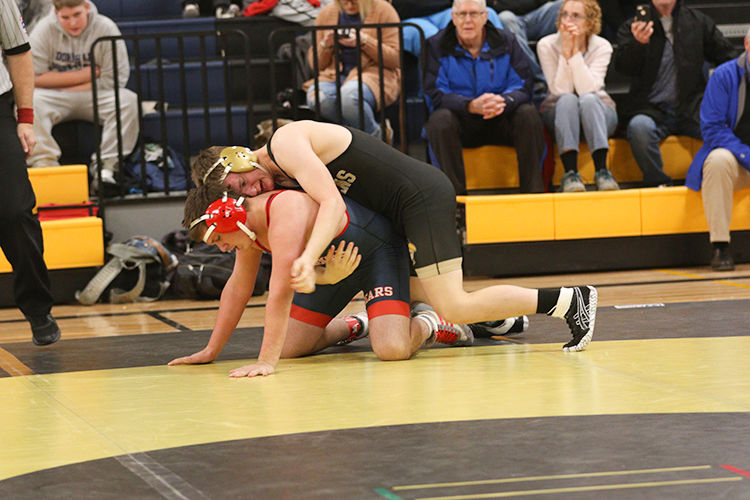 Maur Hill-Mount Academy junior Jake Peltzer with a hold of his Oskaloosa opponent Thursday night at the MHMA Mixer. 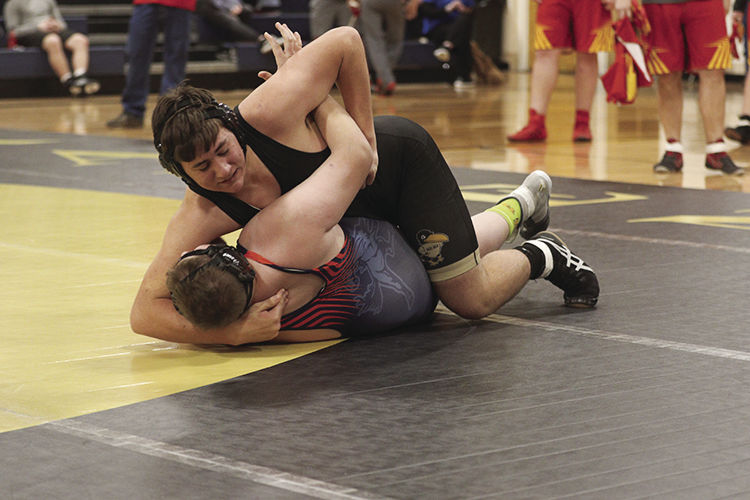 Maur Hill-Mount Academy junior Samuel Underwood has his Doniphan West opponent on the mat Thursday night at the MHMA Mixer. 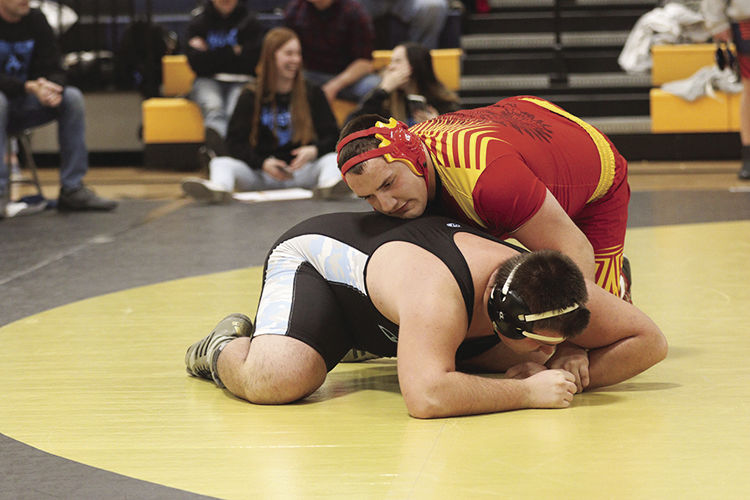 Maur Hill-Mount Academy junior Jake Peltzer with a hold of his Oskaloosa opponent Thursday night at the MHMA Mixer.

Maur Hill-Mount Academy junior Samuel Underwood has his Doniphan West opponent on the mat Thursday night at the MHMA Mixer.

The Maur Hill-Mount Academy wrestling program hosted its third straight mixer with a total of six teams in attendance.

Raven coach Craig Handke reflected on how the program has grown and the role athletic director Richard Hunninghake has played.

“Everything our program has done, he’s been right there with us,” Handke said.

The program also honored their two seniors Will Madden and Dylan Smith.

Handke said he was impressed with a number of his younger wrestlers on the night.

“A lot of the younger guys showed a lot and wrestled really well,” Handke said.

MHMA junior Sam Underwood is new to the program and went 2-1 in the event with both wins by fall.

“He’s only been wrestling for two months and it looks like it’s kind of coming together,” Handke said. “He really impressed people.”

A number of the veteran wrestlers for the Ravens faced adversity with some stiff competition throughout the night.

Will Madden and Smith both had just one loss at the mixer against two of the better wrestlers they’ll face this season.

“Some of our older guys I’m tougher on,” Handke said. “It helps us know what we need to work on and where we need to be. Sometimes you need to get hit in the mouth.”

Sophomore Patrick Madden went 1-2 on the night but faced tough competition with one of those being Atchison sophomore Jake Rebant.

“He’s had tough kids to wrestle but he’s getting a lot better,” Handke said. “He’s been wrestling for only a year.”

Junior Jake Peltzer went 2-1 on the night with both coming by way of falls in tough matches.

Redmen coach Ed Crouse said the mixer helped knock a little bit of the rust off of his team.

“A few of the kids I thought were at their best,” Crouse said. “I’m glad we got this out of us because some kids did look rusty. We wrestled better towards the end but started slow.”

Archer Willis had three victories with two by way of a fall. Willis won one of the most highly contested matches of the event over Seager.

“Archer Willis had a great night against a couple of really good kids,” Crouse said. “He was able to fight back after being down and winning that match was a good gut check for him.”

Senior Nick Funk won both his matches on the night by way of pin at the 285 level.

Jayden Watkins won both his matches and Crouse said he was glad to see Watkins get some work after not having a ton of matches so far this season.

“He did a really nice job,” Crouse said. “He hasn’t had as many matches this year so it was nice to get the rust off of him.”

Handke said he is sad to see two Raven seniors go but is optimistic about both of them potentially breaking through for a state appearance before their careers are over.

“You hate to see them go and wish you had that extra year with them,” Handke said. “Will and Dylan are both going to make a push this year. They are going to have to beat someone they aren’t suppose to but they can do it.”