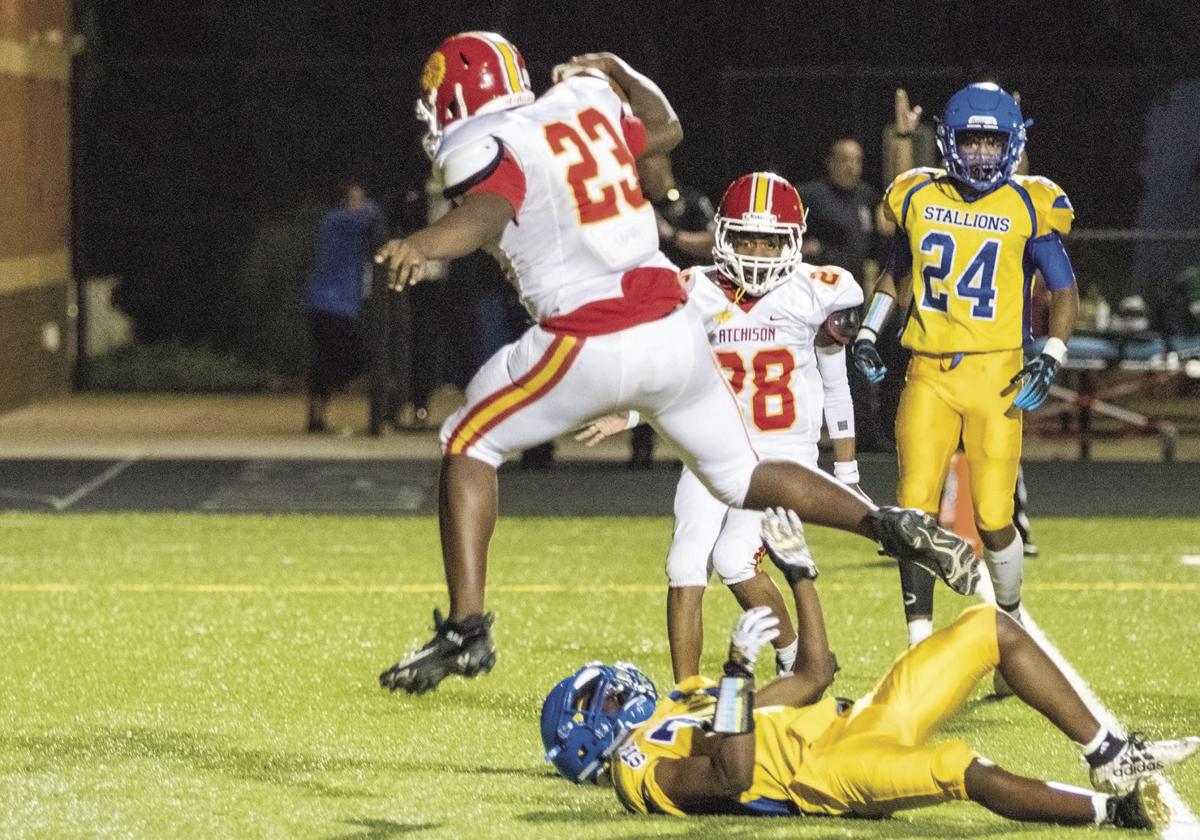 Junior Xavier Cushinberry leaps over the opposition into the endzone in the third quarter against the Schlagle stallions, taking what would be AHS’ only lead of the game. 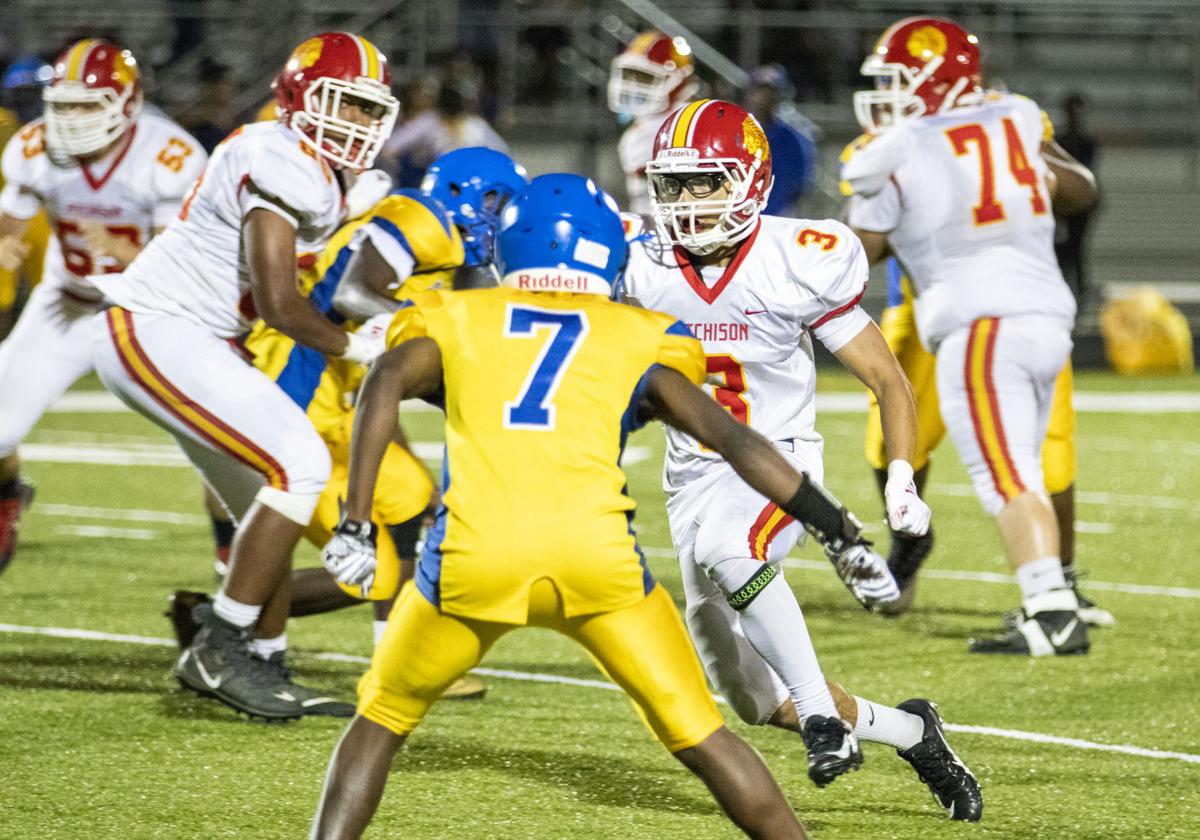 Sophomore Dominique Herrig-Brittian runs the ball against Josh Becton of the Schlagle Stallions on Saturday in Kansas City.

Junior Xavier Cushinberry leaps over the opposition into the endzone in the third quarter against the Schlagle stallions, taking what would be AHS’ only lead of the game.

Sophomore Dominique Herrig-Brittian runs the ball against Josh Becton of the Schlagle Stallions on Saturday in Kansas City.

KANSAS CITY, Kan. — With a full moon on Friday the 13th, the Atchison Redmen, having surrendered the lead and then a decisive 9-point margin amid the ninth AHS fumble of the game in the fourth quarter, found themselves huddled in the dark, as the lights suddenly went off on their post-game huddle.

“Hey what the heck?” a player called out, before a familiar cadence followed among the coaching staff. “Focus up, focus up, pay attention.” Unfortunately, focus proved to be elusive in the second game and second loss of the season in Kansas City to the F.L. Schlagle Stallions, 33-24.

Indeed, turnovers plagued the Redmen the entire game, beginning with two touchdowns converted off of fumbles in the first quarter, though neither had the extra sting of extra points; both teams relied on two-point conversion attempts all night.

“There’s just no way to win when you have that many turnovers,” Head Coach Jim Smith said. “There’s just little disciplines that we’ve got to work on, we have talked about this as a team. We’ve got to get more focused.”

Aside from the Schlagle defensive touchdowns, the Redmen showed gumption against the home team and managed to mitigate the damage, setting up a drive early in the second quarter that drove the Redmen to the goal line before QB Patrick Denton popped it in. A two-point conversion put the game at 12-8.

Energetic defensive play marked the second and third quarters, including in a moment about halfway through the second quarter when Redmen Jesse Greenly and Brent Clary wrapped up the Stallions’ offensive drive midfield. The Redmen regained possession and promptly fumbled, but the defense salvaged the moment by pushing the Stallions to their own 1-yard line whereupon a snap went wild for the home team and junior DL Nathan Blakley smothered their efforts to recover for safety, putting the score at 12-10 at the half.

The Redmen seized the momentum in the third quarter with an almost indomitable ground game, junior running back Xavier Cushinberry arcing around defenders and carrying men on his back on more than one occasion.

“He’s a big, hard working kid and I can’t say enough about him,” Smith said of Cushinberry. “He just wants the ball.”

However, focus remained an issue and both teams drew penalty flags for taunting and physical altercations throughout the night.

Still, the Redmen appeared to have the wind in their sails on a line to a victory when Cushinberry leaped into the endzone and the defense held to secure an 18-24 lead. The follow-up drive showed equal promise before the Redmen fumbled in the red zone, before quickly recovering and punching it in.

“I really felt so good about our running game. We were just going right at ‘em the entire night,” Smith said.

Despite all the momentum behind them heading into the fourth quarter, the Redmen lost it. Early in the quarter, a defensive penalty awarded the Stallions a new set of downs midfield when they had been looking at a turnover. This led directly to a touchdown. Immediately afterward, AHS return man Dameon Owen advanced the ball to midfield on a wild 25-yard run, before AHS fumbled for the eighth time and the Stallions converted it to a TD.

The mental mistakes and ball control problems proved to be too much for the Atchison side and the Stallions ended it by taking a knee with 1:30 on the clock in the fourth, the final score 33-24.

Marcus Clem can be reached via marcus.clem@atchisonglobenow.com or @AdAstraGorilla on Twitter.