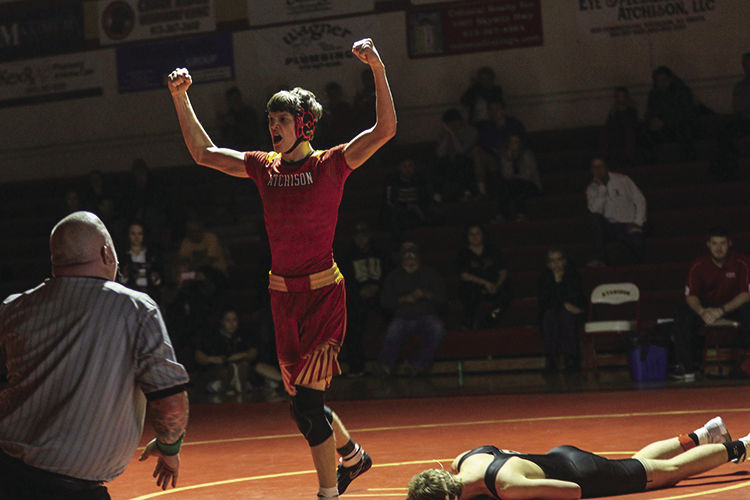 Atchison senior Jeff Scott raises his hands up in celebration after pinning his opponent Friday at Atchison High School. 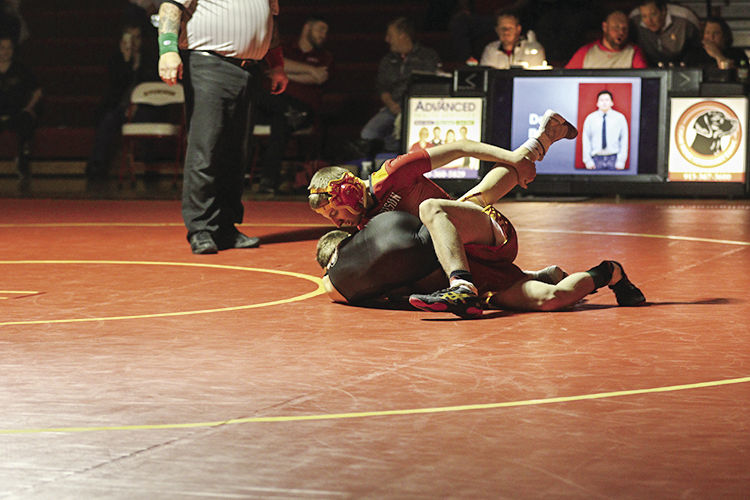 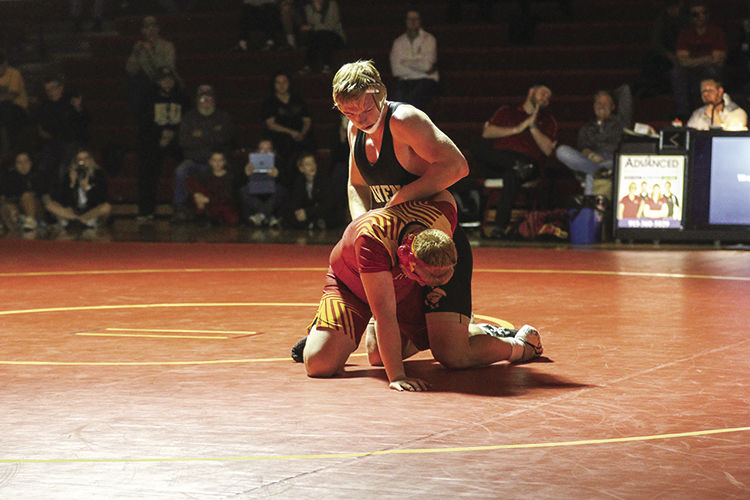 MHMA senior Will Madden has his Atchison opponent down on the mat Friday at Atchison High School.

Atchison senior Jeff Scott raises his hands up in celebration after pinning his opponent Friday at Atchison High School.

MHMA senior Will Madden has his Atchison opponent down on the mat Friday at Atchison High School.

Atchison coach Ed Crouse had to fight back tears Friday during the program’s first ever home assembly dual.

“It’s been a long time since we’ve had that many students in here excited about wrestling,” Crouse said. “It almost made me cry.”

The Redmen defeated the Ravens 44-30 on the day with the lower weight classes being dominated by Atchison.

“Our lower weights were pretty strong and they showed us everything they needed to show us,” Crouse said.

Sophomore Archer Willis won in a decision over Junior Ethan Seager in the 113 weight class.

“He looked like a beast,” Crouse said. “He’s been working really hard on his strength and he looked really strong out there.”

Watkins even talked to Crouse about future goals he has this season.

Despite losing some in the upper weight class, Crouse was still encouraged by what he saw from a young group.

“The upper weights are very young but they showed me they have some stuff,” Crouse said. “They’ve been picking some things up in practice and I’m really excited about where they are headed.”

Raven coach and former wrestler under Crouse, Craig Handke said he hopes for this event to continue and draw more attention to the sport in the community.

“Anything he (Crouse) can do to make it grab a new fan and keep the loyal ones coming back is something I’m all for,” Handke said. “Anyone who enjoys high school wrestling would’ve had goosebumps this afternoon.”

He also the defeat to a program like Atchison gives his team a good perspective on what needs to be improved on early in this season.

“A lot of work needs to be done and every coach will tell you that,” Handke said. “Today lets my guys realize just how much better shape we must be in.”