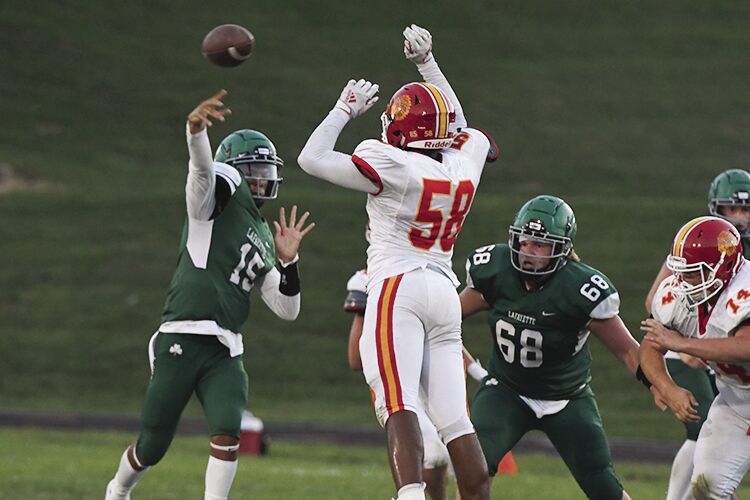 Lafayette quarterback Jaron Saunders throws downfield against Atchison during their game on Friday at Alumni Field. 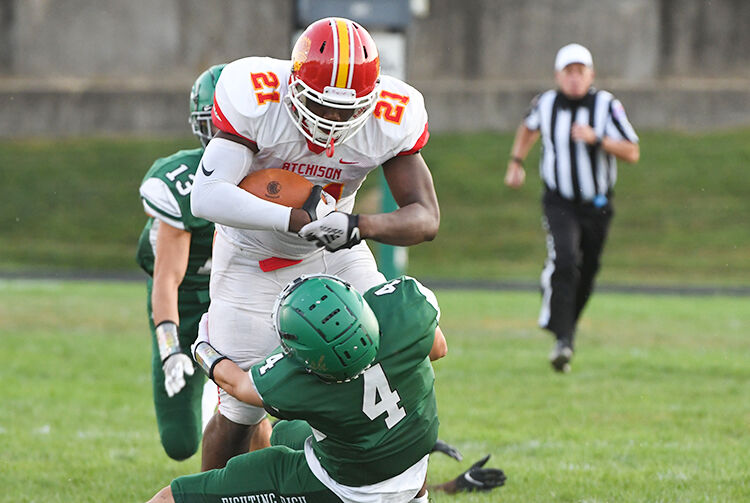 Atchison running back Xavier Cushinberry runs through Irish defensive back Xavier Nichols in the first quarter of their game on Friday at Alumni Field.

Lafayette quarterback Jaron Saunders throws downfield against Atchison during their game on Friday at Alumni Field.

Atchison running back Xavier Cushinberry runs through Irish defensive back Xavier Nichols in the first quarter of their game on Friday at Alumni Field.

Lafayette put together a comprehensive effort in their 28-7 win over Atchison on Friday at Alumni Stadium, rebounding from an early deficit with the help of senior running back Miles Henderson’s three touchdowns.

After coming out on the wrong end of a nail-biter against Harrisonville last week, Lafayette (1-1) coach Eric McDowell appreciated getting an early season win.

“We felt like we played pretty good last week so it’s nice to come out this week and play well enough,” McDowell said. “They were a good team so this is a solid win. Next week we’ve got a big rivalry game, so hopefully we’ll be better next week as well.”

It was the Red Men who struck first blood in the contest, scoring their only touchdown of the day after a botched snap by Lafayette gave them the ball at midfield. Atchison’s (0-1) bruising running game did the rest of the work, busting off a pair of big runs before senior Xavier Cushinberry ran it in from one yard out to give them the first lead of the game in the second quarter.

After that point though, the Irish were able to rise to the challenge. They contained Cushinberry on the ground and took advantage of a litany of Red Men turnovers to turn the game in their favor. Most notably, an interception by senior Derrick May set up a score to take a 14-7 halftime lead and a pick six by defensive back Mekhi Reed in the fourth quarter all but sealed it for Lafayette.

“The turnovers played a huge part in this game. You know, we were moving the ball well, but you turn the ball over against an athletic team like Lafayette and it’s going to hurt us every time,” Atchison coach Jim Smith said. “I think a lot of it was first game jitters. We just didn’t see some things that we should be seeing, and those are things I feel are correctable.”

After stalling out early on in the game, the Irish went deep into their playbook and called on Henderson to throw the ball on a halfback option. The 23-yard touchdown pass to May was Henderson’s first of three total touchdowns on the day.

“When you come out, you’re always looking to see if a team is being really aggressive on the edge defensively,” McDowell said. “Miles throws a perfect pass. Almost threw it off his back because he slipped a bit, but it was a good play that went our way.”

Despite supplying the entirety of the team’s offensive point total, Henderson deflected credit.

“I wouldn’t say I’m a huge part (of the win), I just do whatever I can to help out the team and make us win,” Henderson said. “All of us are important, it’s not just one person it’s all of us.”

Henderson was nothing but optimistic about the team’s trajectory as they head into a rivalry game against Benton next week.

“The first win of the season, the team’s just gonna come back better and better every week,” Henderson said. “I feel great, the atmosphere is great. We just need to come together more. We still haven’t played our best game but we’ll get there, I promise.”