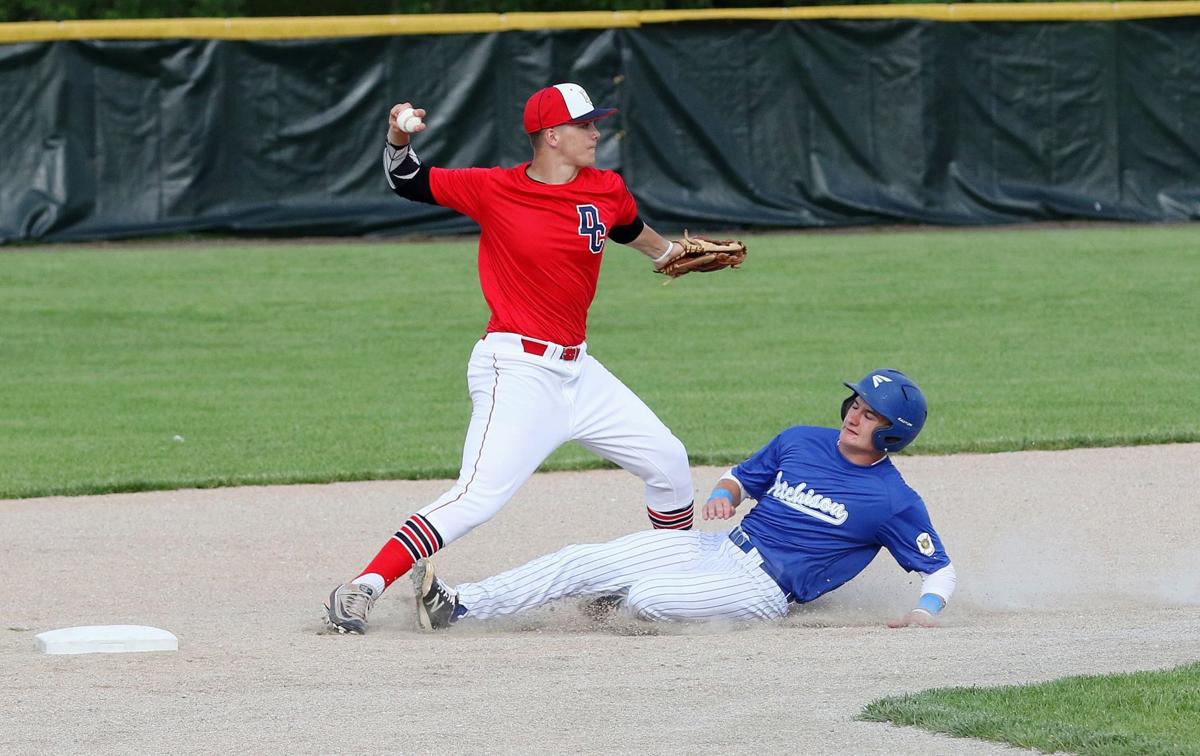 Doniphan County’s Wyatt Huss turns a double play while Atchison’s Adam Smith attempts to break it up. DC swept the A’s, 7-1 and 13-0. 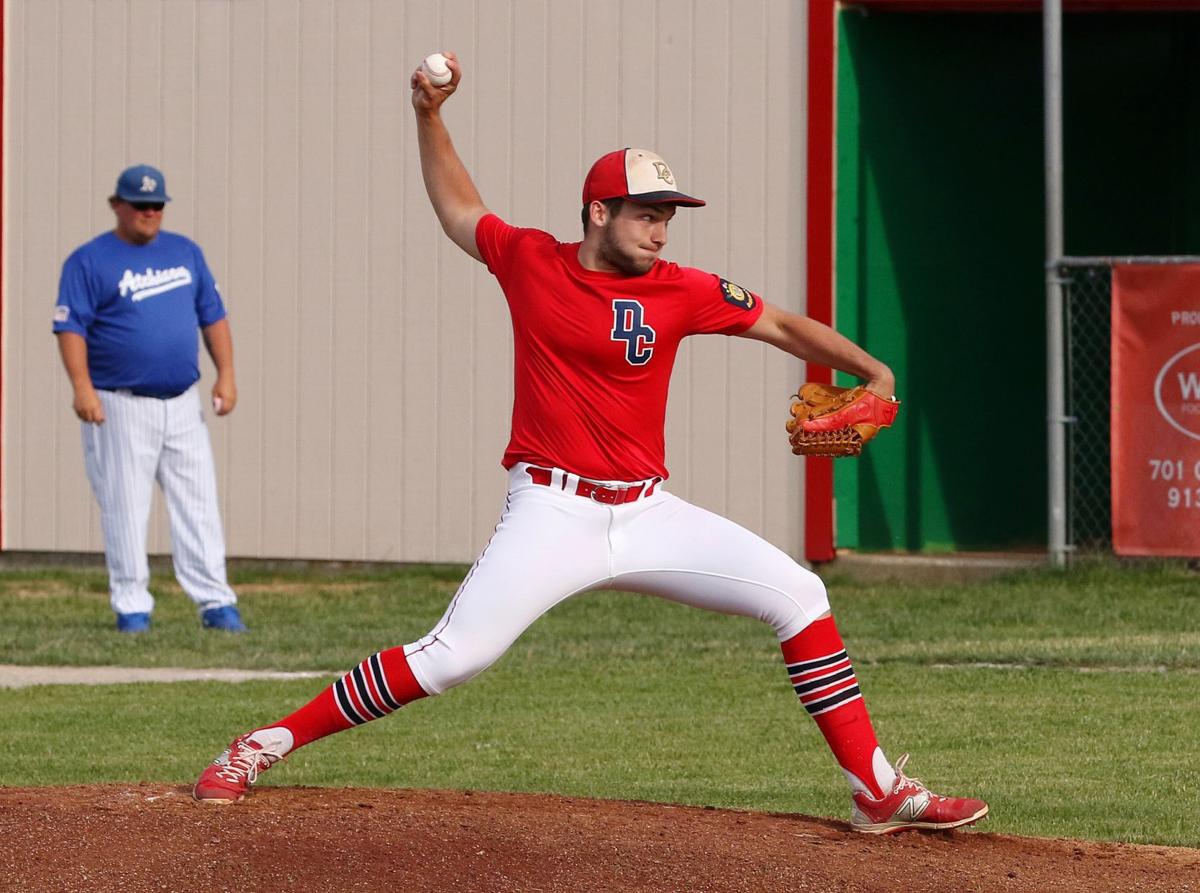 Nathan Gaarder of Doniphan County pitches in the first inning of Game 1 on Wednesday. Gaarder gave up one run in seven innings on the mound. 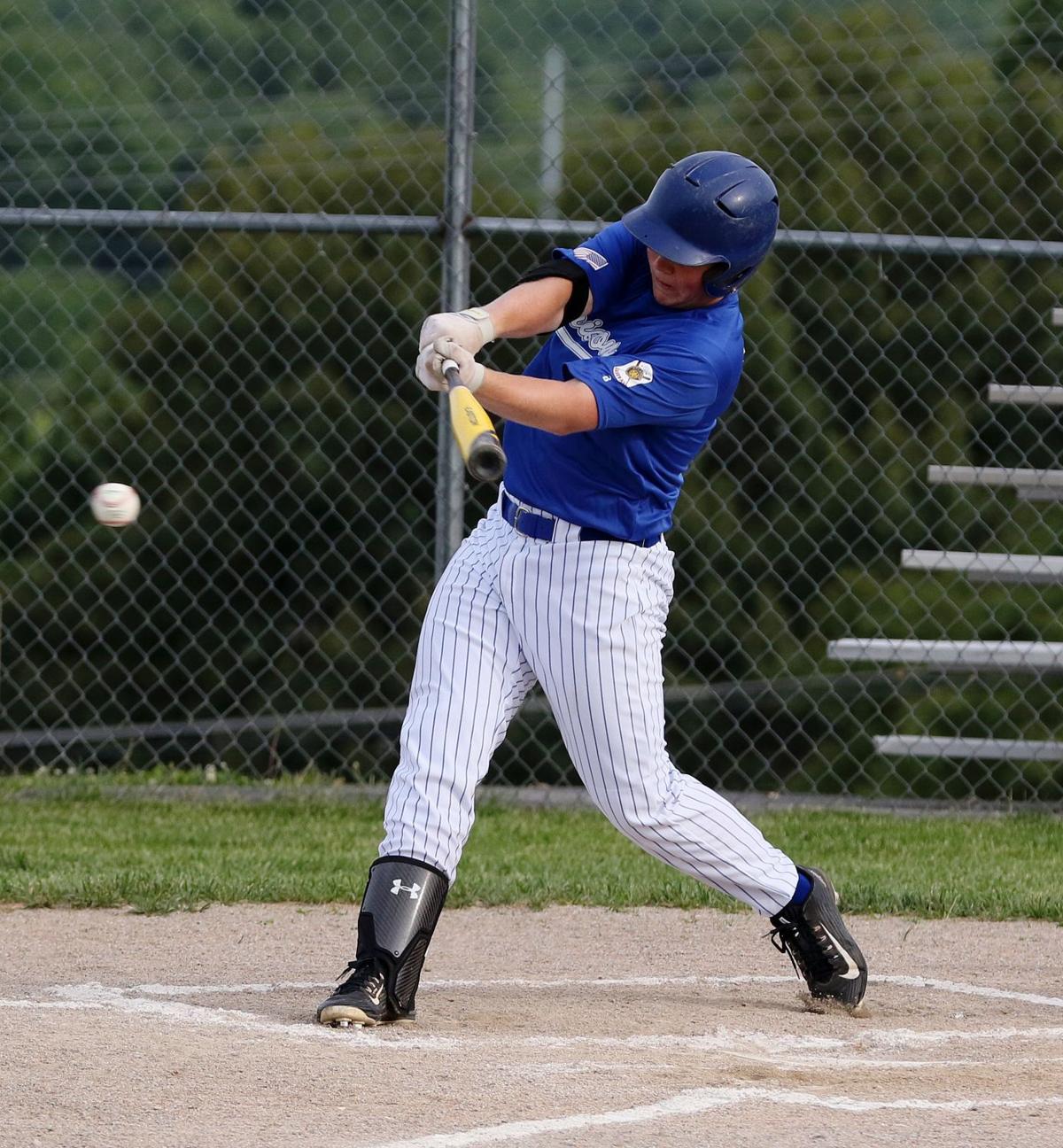 Doniphan County’s Wyatt Huss turns a double play while Atchison’s Adam Smith attempts to break it up. DC swept the A’s, 7-1 and 13-0.

Nathan Gaarder of Doniphan County pitches in the first inning of Game 1 on Wednesday. Gaarder gave up one run in seven innings on the mound.

To truly understand Wednesday’s doubleheader between the Atchison Senior A’s and Doniphan County, one must look closer than the final score.

Doniphan swept the doubleheader in Atchison, winning Game 1 7-1 and Game 2 13-0. But, of the 16 innings that were played in the two games, the teams were tied or within one run of each other for 14 of them. Two tough innings doomed the A’s, beginning their 2016 campaign with a record of 0-2.

Atchison’s Noah Baniewicz and Doniphan’s Nathan Gaarder put on matching, supreme performances on the mound to open the doubleheader, but the visitors scored six times in the 11th inning to earn the 7-1 win.

Baniewicz held DC hitless until the fourth inning. Reid Greaser walked, followed by a double by Chris Winkel. Gaarder walked to load the bases, and Greaser scored on a fielder’s choice by Tucker Morris. Another walk, this time drawn by Wil Smith, loaded the bases again, but the A’s escaped the jam with just one run allowed.

Meanwhile, Gaarder was coasting on the mound for DC. He struck out four consecutive batters, then got a pop out to record the second out of the sixth inning. With no runners on and two outs against a pitcher who didn’t seem to be tiring, it looked like the A’s would have to regroup in the seventh.

But Hunter Wahwahsuck’s two-out single started a rally. He stole second base, then came around to score on an error. Marcus Denton reached on the error, and Baniewicz knocked a single to move Denton to third. Looking to take a lead for the first time, a routine pop-up ended the Atchison threat.

DC put together its own threat in the seventh inning. Gaarder singled and Morris walked to put two on with no outs. Smith smacked a looping line drive into left and Gaarder broke for third, but Logan Wahwahsuck made a diving catch for the A’s, then threw to second to double-off Gaarder. Doniphan’s chances were dashed in the seventh.

Atchison’s best chance to win the game came in the bottom of the seventh. Steve Cline was hit by a pitch and advanced to second on a sacrifice bunt. Hunter Ostertag worked a walk, but Austin Bonnel flied out. After a lengthy at bat, Adam Smith coaxed another walk to load the bases. With the winning run 90 feet away, Gaarder buckled down and struck out Hunter Wahwahsuck to end the threat.

“I think we could have hit a little better,” White said. “There were plenty of opportunities, especially in the first game.”

The teams battled through three scoreless extra innings. Baniewicz pitched a perfect eighth before giving way to Smith. Gaarder was relieved by Wyatt Huss after seven innings, who pitched four innings in relief.

The A’s never got a good hold of Huss, except for one pitch. In the bottom of the eighth, Baniewicz sent a drive deep into the gap between center and right. In a lot of parks, it would have been a home run. Against most center fielders, it lands safely for a double, but Cuttar Huss tracked the ball down for a long out.

Finally, in the top of the 11th, DC solved Smith. Cuttar Huss walked to leadoff the inning, stole second base, advanced to third on a wild pitch and scored on a throwing error to break the stalemate. Gaarder, Morris and Luke Smith singled in runs, and Wyatt Huss drove in two with another single.

The A’s managed to work a walk against Huss in the bottom of the 11th, but no real threat presented itself.

“When you’re the home team and you get four extra innings, you have to seize the opportunity,” White said, “and we just didn’t take advantage of that.”

The second game mirrored the first, but in six fewer innings.

Brody Winder powered past the A’s hitters for five innings, striking out 11 hitters. Atchison’s Augie Scholz wasn’t able to pump fastballs by DC like Winder did to the A’s, but he did keep Doniphan off-balance enough to keep the game tied 0-0 through four innings.

The wheels came off in the fifth inning, though.

Five walks and a single sent White to the mound to pull Scholz, replacing him with Kevin Scott. The Doniphan eyes remained sharp, though, content to not swing at balls out of the zone. Every batter in the DC lineup scored before the A’s were able to record the first out. When the dust settled, Doniphan had put up 13 runs in one inning.

Winder finished things off by striking out all three A’s hitters in the bottom of the fifth.

If not for a tough opening schedule, Atchison might have been able to go to a relief pitcher earlier than it did in the fifth.

“We have two games Friday and two games Sunday,” White said when asked if he was saving pitching for later in the week. “Not that this game didn’t matter, but it was a good learning experience right off the bat, especially for the younger kids.

“We threw two younger kids we hadn’t seen pitch, and they showed me what I needed to see. You’ve got to see what you have.”

The A’s traveled to Sabetha on Friday for another doubleheader, and will play Corning at 4 p.m. Sunday, June 5 at home.