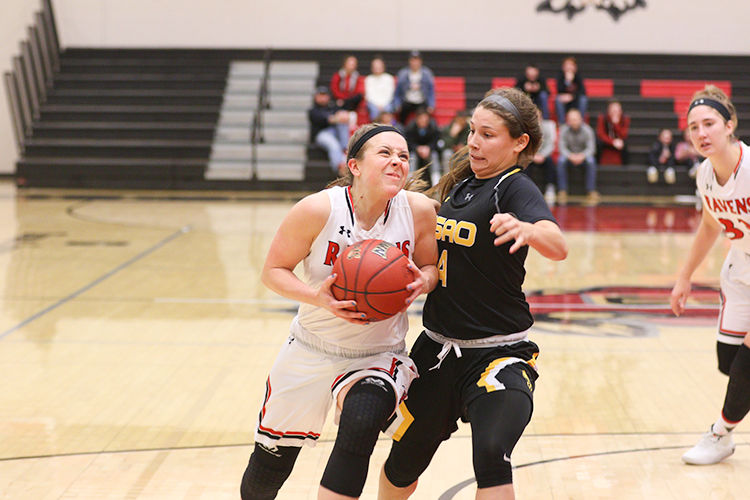 Benedictine senior LaRanda Thomas fights to the basket against a University of Science & Arts of Oklahoma Friday at Ralph Nolan Gymnasium. 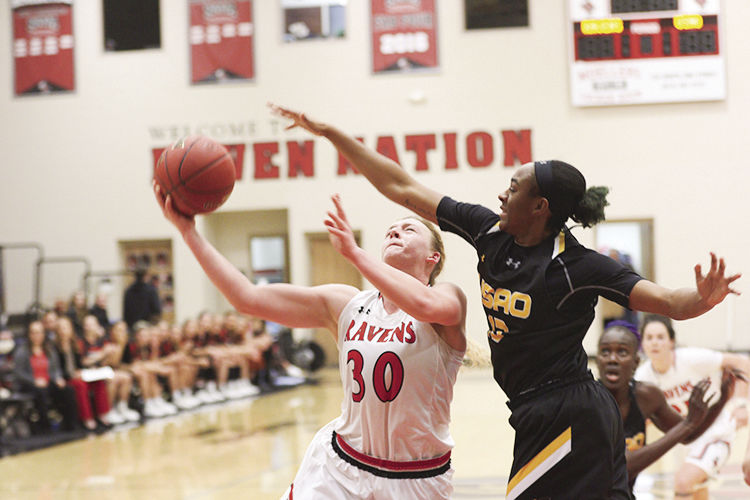 Benedictine forward Rachel Baumgartner goes up for a basket against a University of Science & Arts of Oklahoma Friday at Ralph Nolan Gymnasium.

Benedictine senior LaRanda Thomas fights to the basket against a University of Science & Arts of Oklahoma Friday at Ralph Nolan Gymnasium.

Benedictine forward Rachel Baumgartner goes up for a basket against a University of Science & Arts of Oklahoma Friday at Ralph Nolan Gymnasium.

Benedictine women’s basketball earned a hard fought victory over University of Science & Arts of Oklahoma 69-65 on the first night of the Holiday Inn Express Basketball Classic at Ralph Nolan Gymnasium.

The win was senior guard LaRanda Thomas’ first game of the season after missing the first three with injury and she delivered with a team-high 20 points, which included six three pointers.

“Having her back was huge,” Coach Chad Folsom said. “She’s got the ability to hit shots when she’s open.”

Thomas banked in the three pointer that actually put the Ravens up 66-65 in the final minute of play.

“I think God was on my side with that last one,” Thomas said with a smile. “We’ll take it and it was for sure fun to be back.”

Folsom said getting a win over a USAO that is one of the few teams who will have a height advantage over the Ravens (4-0) was huge.

“They’re a big athletic team,” Folsom said. “It was an opportunity to win on our home court and we did.”

Benedictine enters this season with just as much depth as the previous season but with sharpened experience with a total of ten players who had valuable minutes throughout the season.

“I feel like we’re already much more seasoned at this point in the year,” Folsom said. “It showed tonight as well with how well we were able to take care of the ball.”

The Ravens only had nine turnovers and kept their composure down the stretch to seal the win in a game where they trailed for much of regulation.

“I think we just settled down,” Thomas said. “Sometimes we were getting sped up and shot bad shots but that last ninety seconds we really just slowed down and took what they gave us.”

Sophomore Skylar Washington was second on Benedictine with 11 points and senior Kayla Staley was third with 10 on the night.

The Ravens will finish up the holiday basketball classic at 3 p.m. against York College.