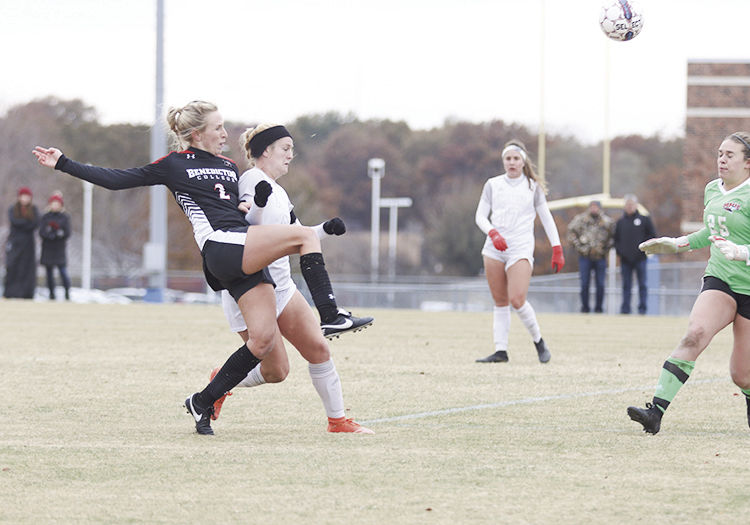 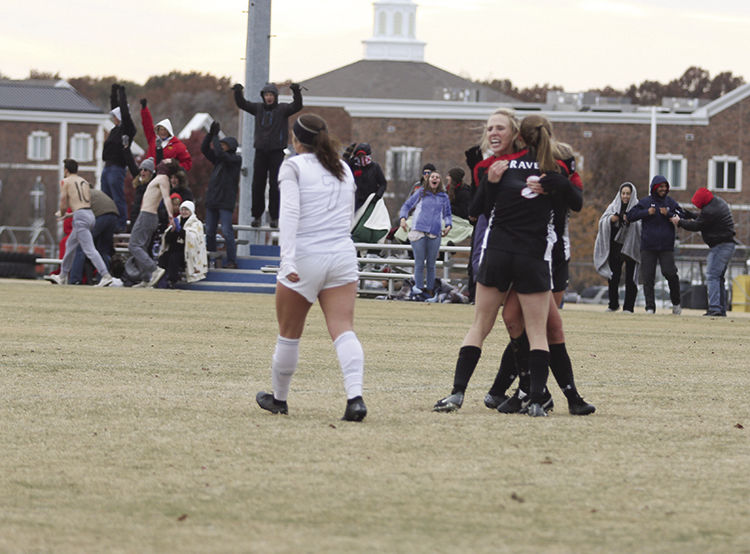 Benedictine senior Nicole Kelly embraces teammates after her second goal of the game against MidAmerica Nazarene Wednesday in Olathe. 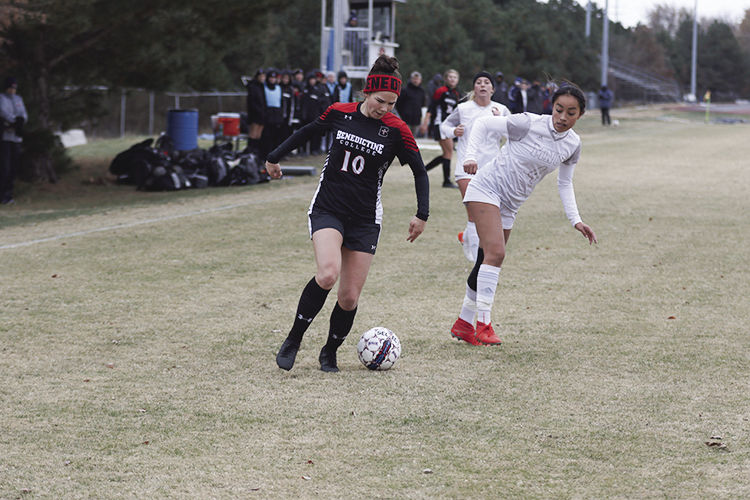 Benedictine senior Nicole Kelly embraces teammates after her second goal of the game against MidAmerica Nazarene Wednesday in Olathe.

Olathe, Kan. — The Benedictine women’s soccer program is headed back to the Heart Conference title game for a record eighth straight season.

The Ravens kept their revenge tour going with a 3-2 road win over MidAmerica Nazarene Wednesday.

Benedictine had previously lost to the Pioneers 2-1 Oct. 16 which marked the program’s first time dropping two consecutive for the first time since 2013.

The Ravens have won five straight since that loss to MidAmerica and coach Lincoln Roblee said his team simply decided they don’t plan on losing again thi season.

“We always get better as the season goes,” Roblee said. “We said we aren’t losing from here on out.”

Senior forward Nicole Kelly had two goals on the day, including the final goal of game that put the Ravens up 3-2 with seven minutes remaining.

She also said the team has nothing on their minds aside from making the program’s sixth consecutive trip to Alabama for the national tournament.

“At this point we just have the goal to get back to Orange Beach,” Kelly said. “That takes sacrifice from each of us and I think all of us understand we’re playing for each other.”

Kelly suffered an ankle injury during the first meeting between these teams and missed most of the game and senior middle fielder Isabelle Wilhelm missed the entire game with a red card from the previous game.

Kelly and many other of her teammates are fighting through bumps and bruises.

“We got a lot of players along with her who are beat up right now,” Roblee said. “Half our team right now is showing a lot of guts and courage.”

“The first 25 minutes we were up 2-0 and we were kind of all over them,” Roblee said. “The second half we kind of had a defensive mindset and we kind of let them creep back in.”

Kelly would later give the Ravens the win with her now program record 28th goal of the season as she passed Rosie McShane.

Kelly played two season with McShane and said breaking a record of someone you look up to is beyond humbling.

“She’s honestly an inspiration to all of us,” Kelly said. “To have made a mark in Benedictine women’s soccer history like she has is just an honor.”

The Ravens will travel to Central Methodist University Saturday for the title game. The Eagles won the first meeting over Benedictine 2-1 Sep. 25.