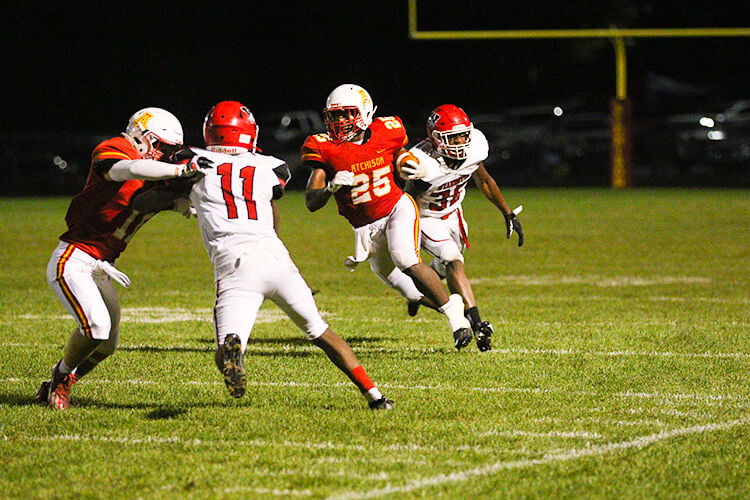 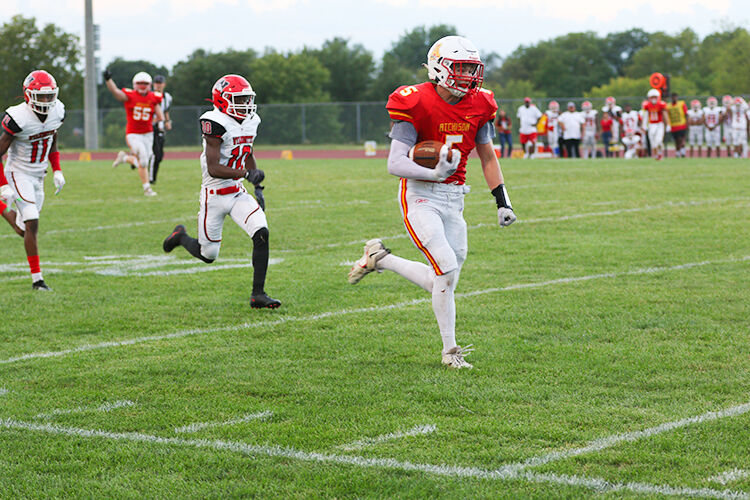 Atchison senior Jake Rebant runs down the field for a touchdown against Wyandotte Friday night at Amelia Earhart Stadium.

Atchison senior Jake Rebant runs down the field for a touchdown against Wyandotte Friday night at Amelia Earhart Stadium.

Atchison football continued the momentum from its comeback over Highland Park in week two with a rather convincing 38-16 home victory over Wyandotte Friday night at Amelia Earhart Stadium.

Coach Jim Smith said his team brought the intensity and effort they had preached during the week of practice.

“I thought we played really hard and that’s something we talked about this week in practice,” Smith said. “If you go the wrong way 100 miles and hour you’re still going to make something positive happen.”

After starting last week slow out the gate, the Phoenix jumped out to a 17-0 lead going into halftime.

Sophomore Trey Carter quarterback said getting up on a team and never letting up felt good especially after the 50-21 loss to Lafayette opening week.

“The first game we got beat by a lot so it feels good to give it back to somebody else,” Carter said.

Junior running back Jesse Greenly had another impressive night with 196 yards and two touchdowns bringing his total 450 yards to nine on the season.

Greenly showed his ability to not only run over opposing defenders but to run away from them as well with a 58-yard dash to the end zone late in the third quarter.

Smith said Greenly can do it all at the running back position.

“He’s just a good all-around back,” Smith said. “He can make you miss, he can out run you and he can put his shoulder down.”

Carter had three scores on the night including a pair of scampers into the end zone.

Carter, Greenly are part of some of the talented athletes Atchison has on offense including sophomore Jeter Purdy and senior Jake Rebant who had the first score on the night with a 46-yard reception.

“I don’t think any of them lack confidence and that’s always a good thing,” Smith said. “They are learning all the time and tonight I thought it showed how much they’ve learned the first couple weeks.”

“There is no doubt in our bodies that we won’t go down and score every possession,” Carter said.

The Phoenix will host JC Harmon next week for Homecoming week.