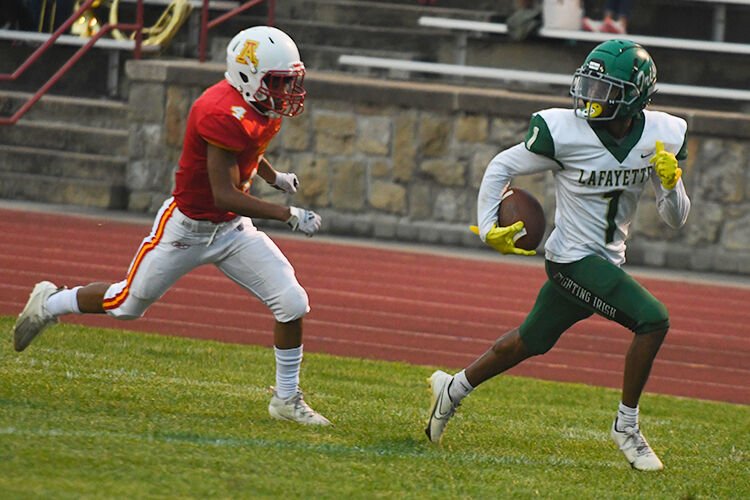 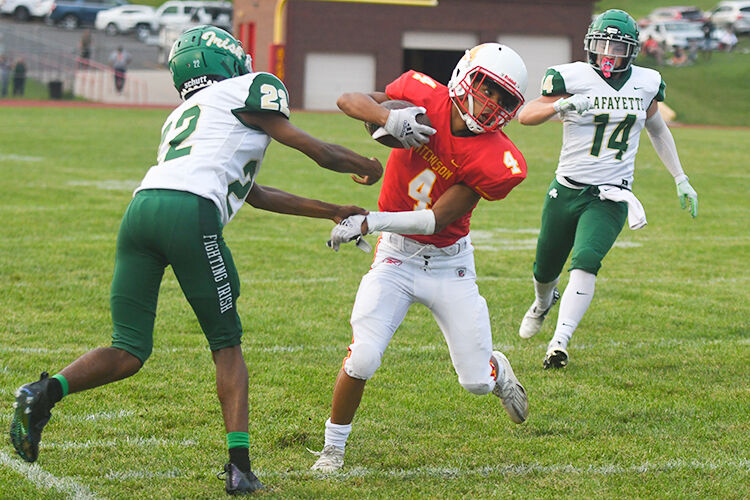 Atchison kick returner Dameon Owens breaks tackles en route to a kickoff return touchdown in the first quarter of their game against Lafayette on Friday at Atchison High School.

Atchison kick returner Dameon Owens breaks tackles en route to a kickoff return touchdown in the first quarter of their game against Lafayette on Friday at Atchison High School.

After an outlandish opening quarter that saw the two teams put up a combined 39 points, Lafayette did away with their early mistakes to take a commanding 50-21 win over Atchison on Friday at Amelia Earheart Field.

It was the first game of the season for the Fighting Irish after their season opener against Carnahan was canceled. It was also Ryan Shroyer’s first win as the Lafayette (1-0) head coach.

“Winning is fun, getting that first win is pretty awesome, but most importantly it’s great for the kids,” Shroyer said. “They were robbed of a game last week and they really needed to play, so I told them to take out their frustration tonight and they sure did that.”

The game started disastrously for Lafayette, with senior Kingston Oliver fumbling the opening kickoff return. Atchison (0-1) senior Xazavier Duncan ran it back to the Lafayette six-yard line, and running back Jesse Greenly took it from there, scoring on a three-yard touchdown run to give Atchison a 7-0 lead.

Following the fumble, Oliver knew he had to make it up to his team. Quarterback Jaron Saunders told him to be ready for the ball to come his way, and Oliver scored an 80-yard touchdown on a fly route on their first offensive play from scrimmage.

“I felt like I had to make a difference. I’m a senior, I think I’m a leader and one of the top receivers,” Oliver said. “My teammates actually helped me because usually, I get down, they were like ‘Kingston, let’s go, you got this and they picked me up.”

After forcing a punt, Saunders drove the Irish down the field and took it in himself for a two-yard score to give them a 12-7 lead.

The Phoenix (0-1) responded with a long touchdown of their own, as senior Dameon Owens ran back the ensuing kickoff for a touchdown to retake the lead as quickly as they’d lost it.

Saunders and Oliver connected for another 50+ yard score on the next drive but fumbled on their next offensive drive to give Atchison a prime scoring opportunity. Freshman quarterback Issac Howard took it in on a QB sneak to take a 21-18 lead after the first quarter.

But the usual suspects weren’t yet done, as Oliver hauled in another 60-yard touchdown just over a minute into the second quarter to give the Irish a 24-21 lead. They did not relinquish it for the remainder of the game.

Oliver deferred to his teammate when asked about his incredible first-half performance.

Saunders offered a conflicting report in regards to his own seven touchdown night.

“Our guys just won their battles. The receivers won their routes, our O-line protected me like they’re supposed to,” Saunders said. “They made the plays, I just threw the ball.”

Lafayette led 30-21 at the half. Without the turnovers on the other side of the ball, the defense tightened up in the second half and didn’t allow another point. Saunders kept it up, throwing yet another score to Oliver on an RPO, and getting senior Carlos Cortez involved with two touchdowns, one of which was for 75 yards.

“It started, we had some first game butterflies and made some mistakes and put ourselves in some spots,” Shroyer said. “But we got better and we capitalized, and throughout the game, we progressively got better.”

Next week, Lafayette will take on in-city rival Benton. Oliver has no doubt his team will be sufficiently motivated to give the Cardinals everything they have.

“You see what we did here, why wouldn’t we be ready?” he said. “That’s our rival, we know what they got and we’re gonna give them the hammer next week.”