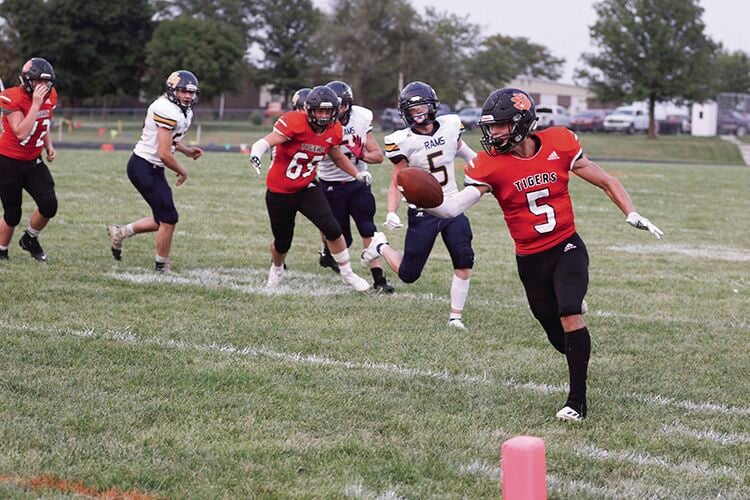 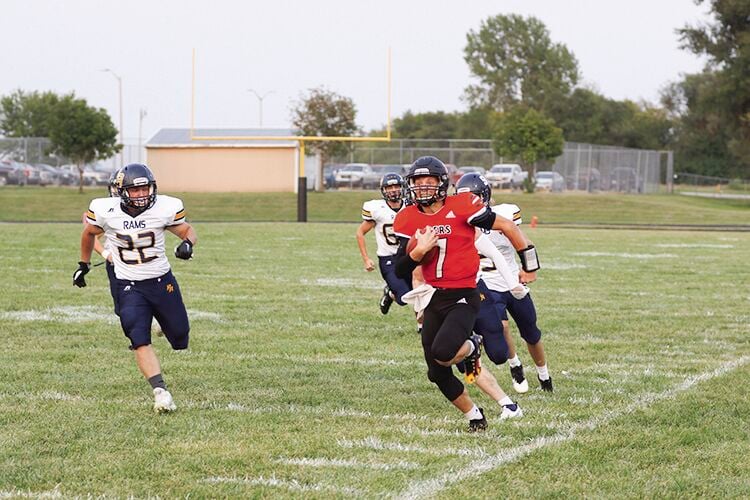 Atchison County Community High School jumped out to a fast lead for the second straight week leading the way to the program’s first 2-0 start since 2012 Friday night in Effingham.

“I’m just happy for the guys and they’ve put in a lot of work over the summer to be where we’re at,” Head coach Alex Thornburgh “That’s a big thing being 2-0.”

The Tigers built a 20-0 lead at the half thanks to three touchdowns from senior Kieran Courter who ran one in on the ground, caught another from junior quarterback Bricen Lee and ran a fumble back on defense late in the first half that demoralized the Rams.

“That’s what we challenge our guys to do each week,” Thornburgh said. “Jump on them early and let our defense take care of them after that.”

The ACCHS defense had another impressive night with the shutout and four forced turnovers.

“They were amazing,” Thornburgh said. “It’s easy to win some games when your defense is giving up three and a half points per game.”

Courter said the unit as a whole came into the game aiming to be physical.

“We came to smack them in the month,” Courter said. “I think we executed on defense well and shut down their playmakers well.”

The Tigers had lost their previous eight meetings with the Rams until Friday night.

“It gives us the confidence we need,” Courter said. “Pleasant Ridge is a great team so we can look back on it and know we can beat a team like that and compete with anybody.”

The three-headed monster of Courter, Lee, and junior running back Coltin Myers had another solid performance on the night.

“We got guys who can beat you on the outside with speed, we got guys who can run downhill and lower the shoulder when they need to get those tough yards, and we got a guy who can throw it over the defense,” Thornburgh said. “We’re really lucky to have those guys.”

ACCHS added a safety in the second half but had several mistakes on offense when opportunities were presented for more points.

“There are a lot of little things we can improve on like line play, conditioning, and getting the snap back to the quarterback better,” Thornburgh said.

Both Courter and Lee credited Thornburgh for what he has brought while beginning his first season as the head coach.

“He’s brought a lot of optimism and implemented an offense that is difficult to prepare for,” Courter said.

“He’s really brought some intensity and that’s what we need,” Lee said.

The Tigers will host McLouth Friday night for their homecoming game. The crowning will be announced at 6:30 p.m. and the game will start at 7 p.m.