Outgoing USD 409 Board members Bill Shipley, left, Rick Zumbrunn and President Herb Gwaltney interact a few moments prior to their last board meeting as elected district officials on Monday night at Central School. 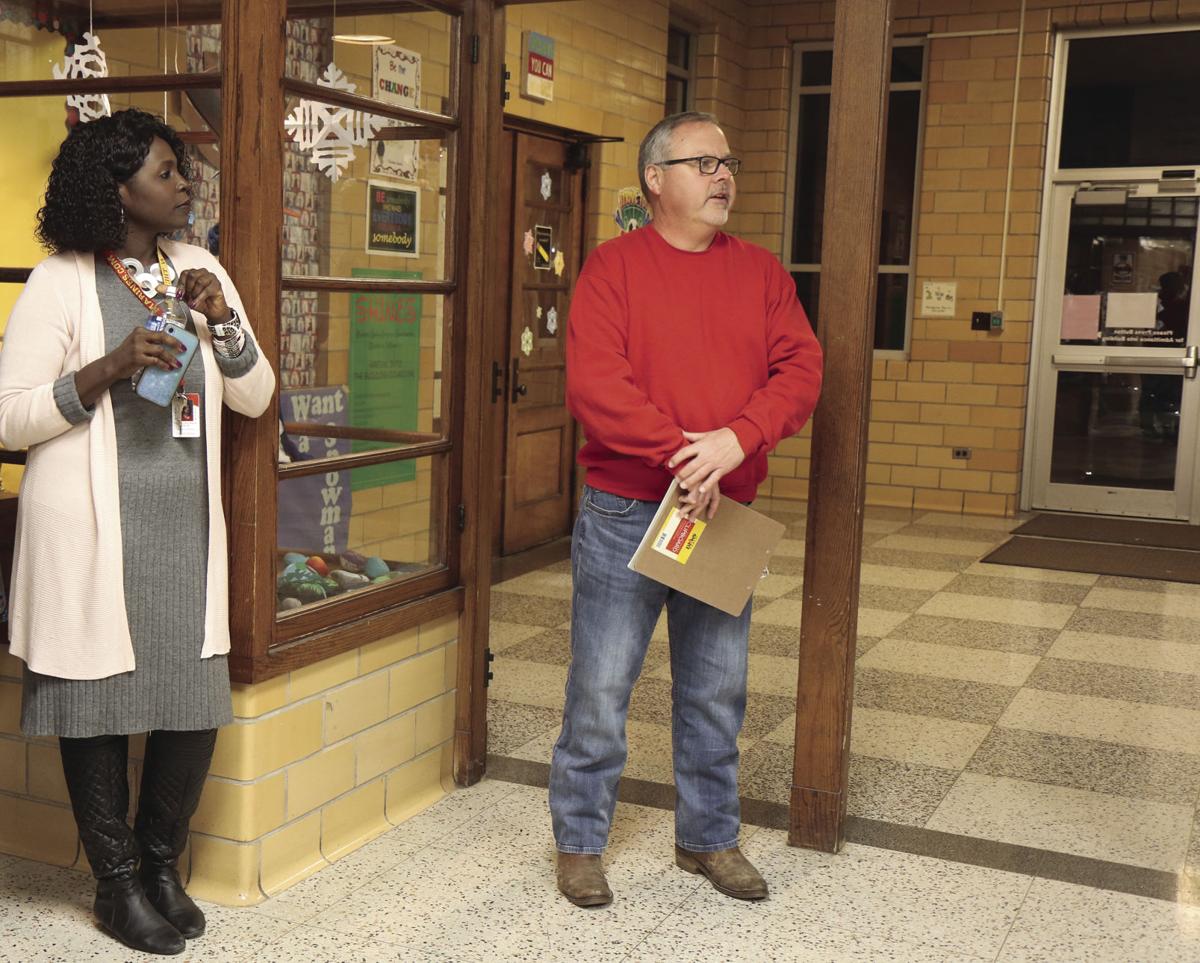 Central School Principal La Tisha Downing and USD 409 Maintenance Director Jay Robinson host a tour of the facility to give board members and guests an inside look as part of Monday’s school board meeting. 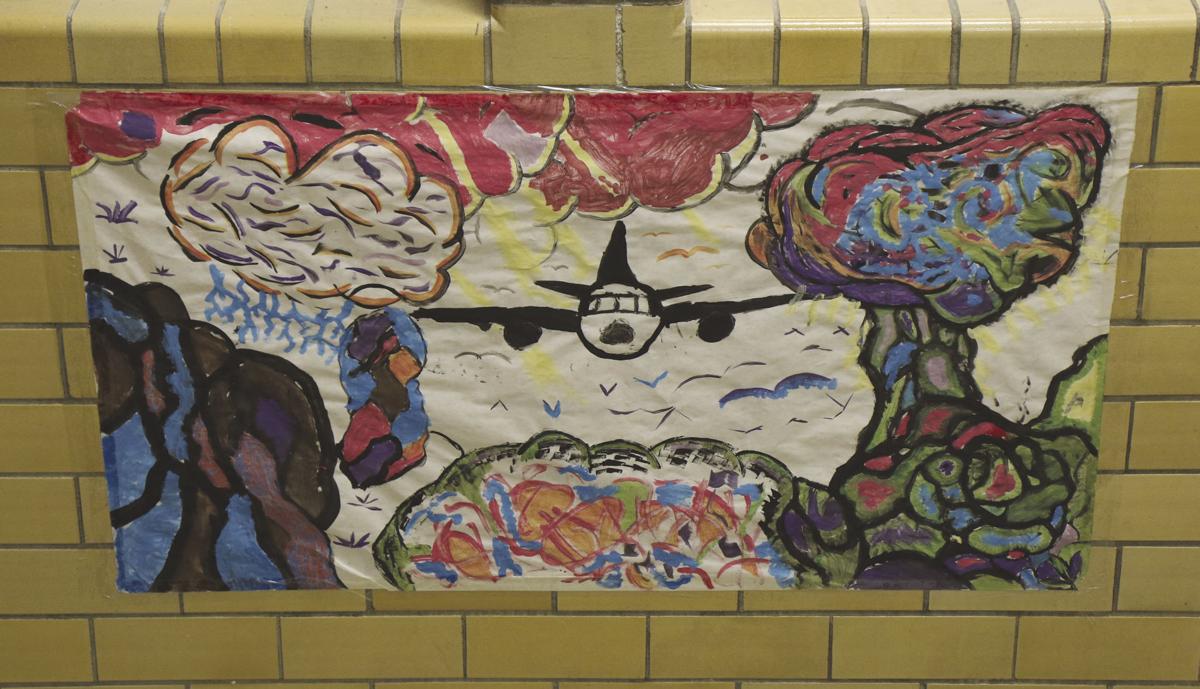 An example of the student artwork gracing the halls in Central School.

Outgoing USD 409 Board members Bill Shipley, left, Rick Zumbrunn and President Herb Gwaltney interact a few moments prior to their last board meeting as elected district officials on Monday night at Central School.

Central School Principal La Tisha Downing and USD 409 Maintenance Director Jay Robinson host a tour of the facility to give board members and guests an inside look as part of Monday’s school board meeting.

An example of the student artwork gracing the halls in Central School.

After USD 409 Board of Education adjourned their meeting Monday night at Central School, three board members vacated their posts, leaving behind a collective 37-year legacy of district leadership.

Rick Zumbrunn served 16 years in multiple terms at various intervals. Outgoing President Herb Gwaltney consecutively served 12 years that culminated from three terms as a board member that followed his retirement from the Atchison High School faculty. Although not consecutively, Bill Shipley served a total of nine years on the board.

It has been an honor to serve with a board that has that many years of experience to guide her as a first-year superintendent, Scott said.

After Gwaltney called the final meeting of his current tenure to order, Central School Principal La Tisha Downing final meeting to order presented updates about academics and activities at the facility.

Downing emphasized that building relationships is a key component along with positive interactions for all 47 students at each level in the facility. Among these inactions was a family activity to benefit the Humane Society of Atchison. Parents, students and some Benedictine College students recently gathered to vibrantly paint and decorate old tires. Then the tires were each stuffed with special pillows in effort to assemble dog beds, which were delivered to the animal shelter.

Emerald Lauts, guidance counselor and a Central School Site Council member, offered respective reports to board members. Lauts said the site council is seeking grant funding to offset costs associated with construction and installation of new playground equipment at the facility. As guidance counselor Lauts said encourages activities for students to engage and build relationships. Rock painting is a popular interaction among the students because they converse while painting the rocks for display in the front lobby area.

Downing told board members Central School is considered as a separate facility from the other buildings, which means the students are required to abide by the state guidelines that includes state assessment testing.

A student named Logan presented some information from a student’s perspective concerning a class project that centered on a geodesic dome shelter the students hand-crafted from paper products that included a frame constructed from tightly rolled newspapers and then covered with white paper sheets that resembled an igloo. The project was displayed on the stage amid holiday blow-ups enhancing a festive scene with Santa, polar bears and penguins.

Maintenance Director Jay Robinson hosted a tour of the facility and highlighted some major facility needs that include tuck pointing mortar, a roof replacement, plumbing pipes and fixture replacements, upgrades in accordance with the Americans with Disability Act, as well as some intercom, safety and security upgrades.

Concerning other matters, board members:

Heard from Technical Director Lucas Hunziger that Highland Community College officials expect to break ground during July 2020 for the new Diesel Technology building on the HCC Campus in Atchison. Hunziger said he is hopeful the building will be able to accommodate classes as early as January 2021.

Heard Hunzinger further report that he anticipates 44 AHS students will be attending classes at HCC Tech Center during the 2020 spring semester. Currently there are 15 technical programs offered at the center.

Observed a moment of silence in memory of Delbert “Dub” Ehret for his years as a role model in the community by serving as director of the YMCA and two terms as a member on the Atchison Public Schools Board of Education.

Unanimously accepted the district’s audit report for the 2018-19 schoolyear ending June 30. Chief Financial Officer Lori Lanter reported there were not errors found in the district and Atchison Recreation Commission financial reports. Jim Long conducted the audit. The report is to be submitted to the State of Kansas before Friday, Dec. 27 in time for the Tuesday, Dec. 31 deadline.

Unanimously appointed Sadie Stone to serve a 4-year term on the REC Board replacing William Norris whose term expires Dec. 31.

After a 20-minute executive session in the presence of Scott and Larry Mears, board attorney, to discuss matters of nonelected personnel behind closed doors, board members took the following unanimous actions: