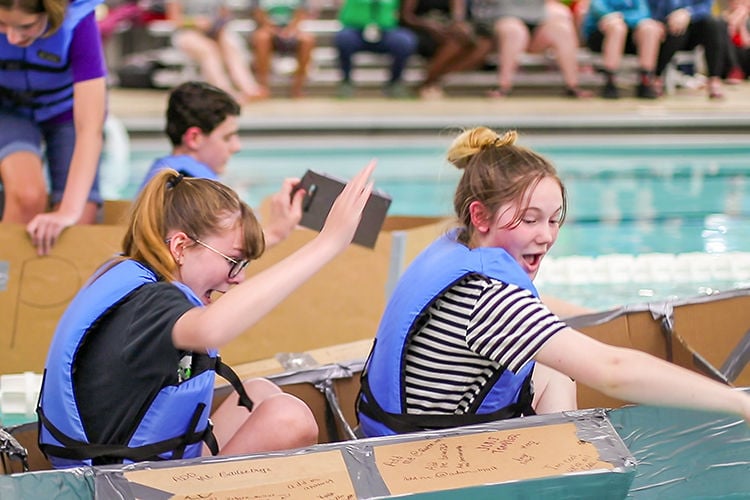 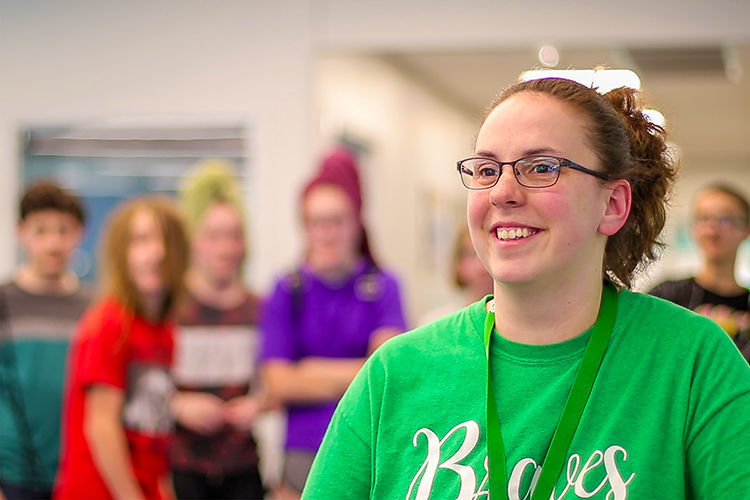 Sarah Schuler, eighth grade science teacher at Atchison Middle School, teaches her students the principles of buoyancy and the value of teamwork in organizing the Atchison Family YMCA Cardboard Regatta.

Sarah Schuler, eighth grade science teacher at Atchison Middle School, teaches her students the principles of buoyancy and the value of teamwork in organizing the Atchison Family YMCA Cardboard Regatta.

Everyone learns by failing, or perhaps by sinking, and then getting back up.

This is the main idea of the Atchison Family YMCA Cardboard Regatta, an annual competition among area public school students — in Wednesday’s event, eighth graders at Atchison Middle School — and a test of teamwork and basic engineering knowhow.

It really is a matter of whatever floats your boat: The students, led by science teacher Sarah Schuler, are provided a 3-foot-by-7-foot piece of cardboard, three rolls of duct tape, and other basic supplies in constructing a boat that will take two students down a half-Olympic size swimming lane, about 82 feet.

Most of the groups competing had at least one student fall in the water as the cardboard proved unable to support their weight. Most ended up with a crumpled mess of soggy cardboard and tape, which they scooped out of the pool with help from YMCA and AMS staff, red-faced, but having fun with their friends.

One pair of girls, Bailey Farrell and Joni Templar, and the crew supporting them managed to complete two trips down the length of the pool before the water compromised the integrity of the cardboard.

“I think a lot of us were really excited, but like scared at the same time, because we didn’t really know how it would work out,” Farrell said. “But it was pretty fun to build and work together.”

Schuler emphasized the goal of the project: Presenting the children a task with a high chance of failure as a learning experience, while allowing those with a well-designed boat and good peer cohesion to succeed.

“They will have to work as a team, just as in their careers in the future,” she said. “They have to know how to work with people, to accept people’s ideas, and to incorporate other people’s parts with their parts. So I think it’s super important that they learn how to do that.”

Farrell said she appreciated the lesson even though she and her friends managed to build the most successful boat, if not quite the fastest one. The height of the boat’s folded sides probably served as their greatest advantage, she noted, along with a protective lining of duct tape along the bottom.

“Teamwork really comes into play when you’re with a big group, like we were, a whole class of 24 people,” she said.

Marcus Clem can be reached via