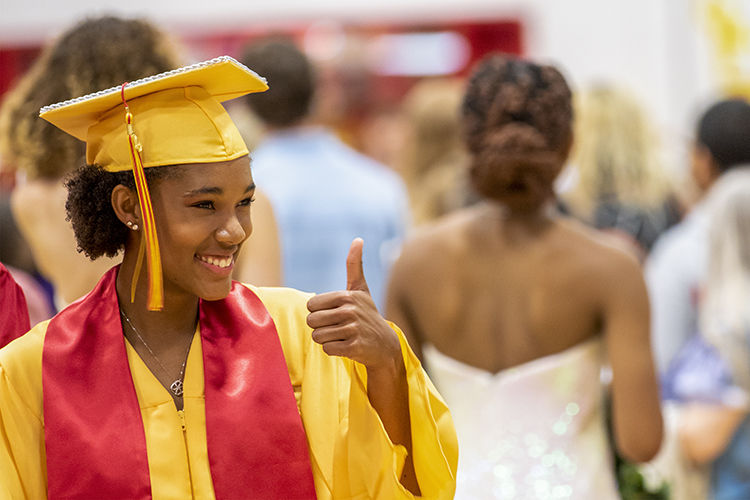 Kadejah Ross gives a thumbs up to loved ones supporting her graduation. 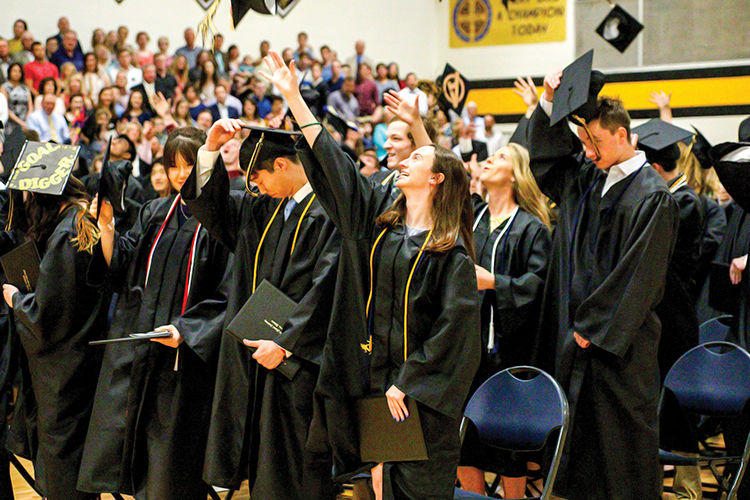 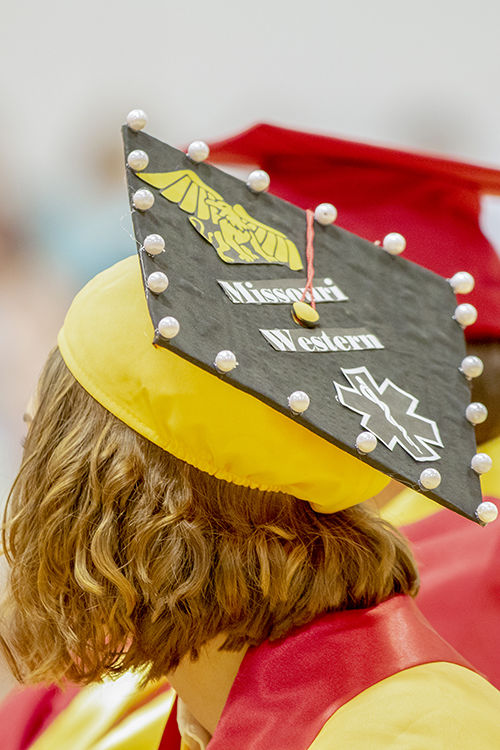 A student displays her intent to attend Missouri Western. 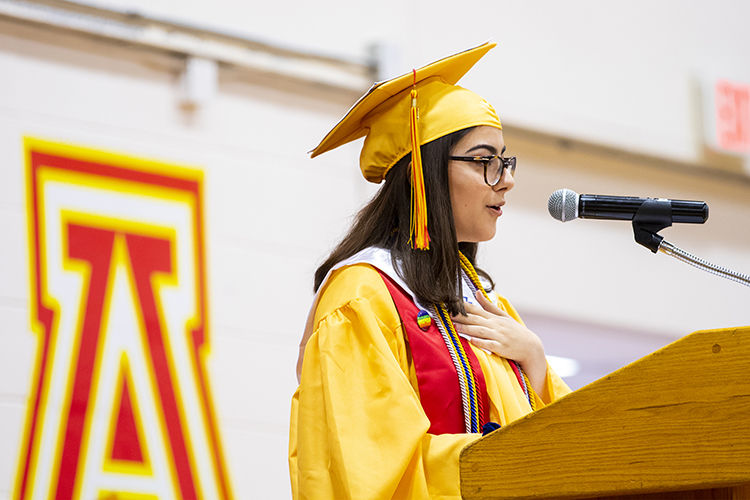 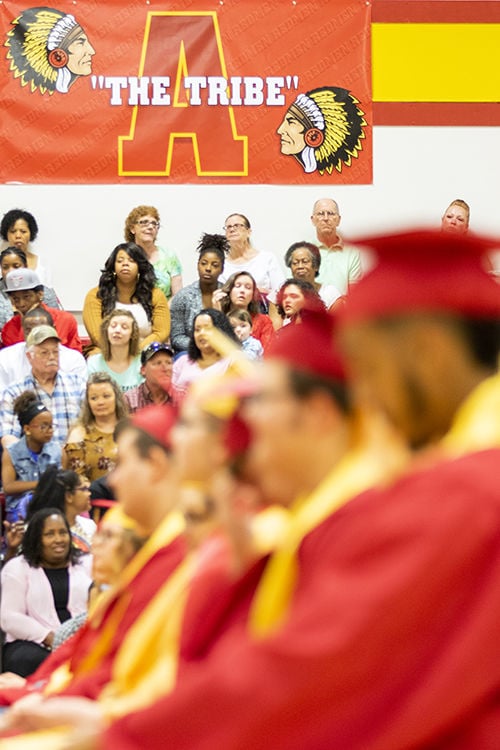 Members of the Class of 2019 await summoning to the stage. 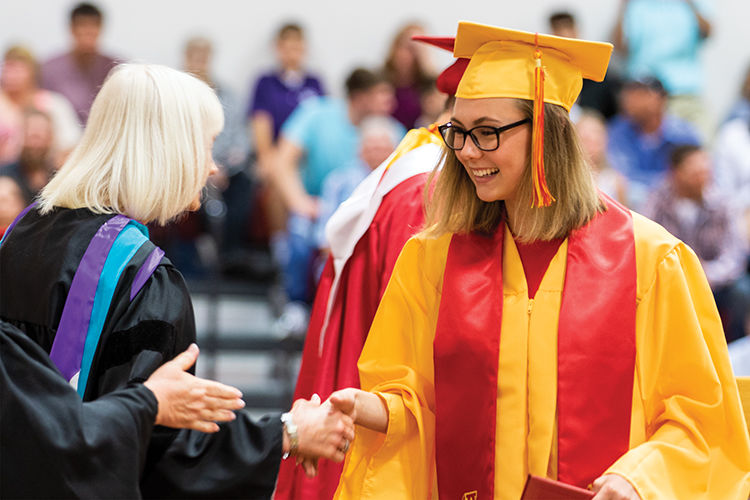 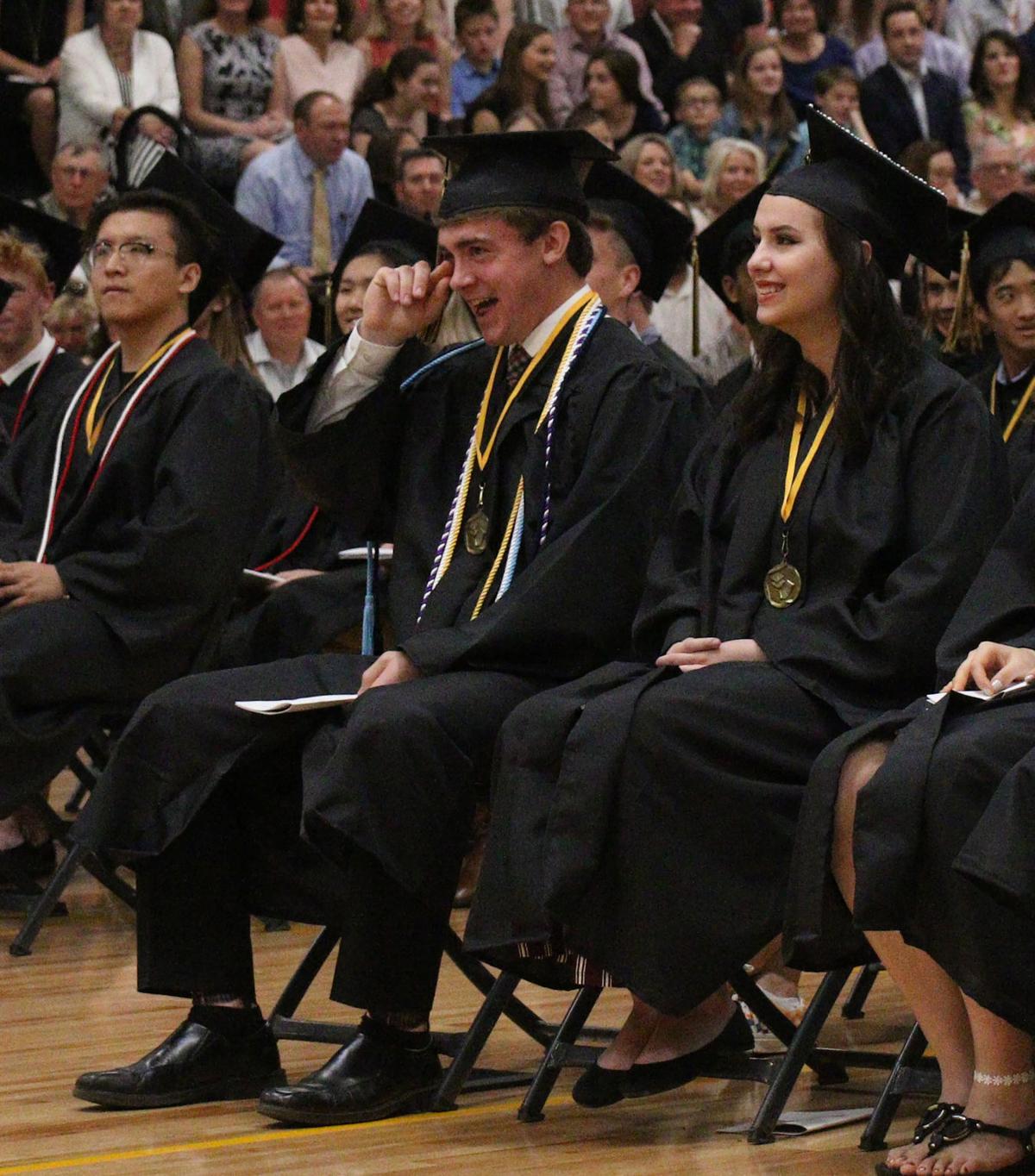 MHMA students listen and react to the speech of the Valedictorians. 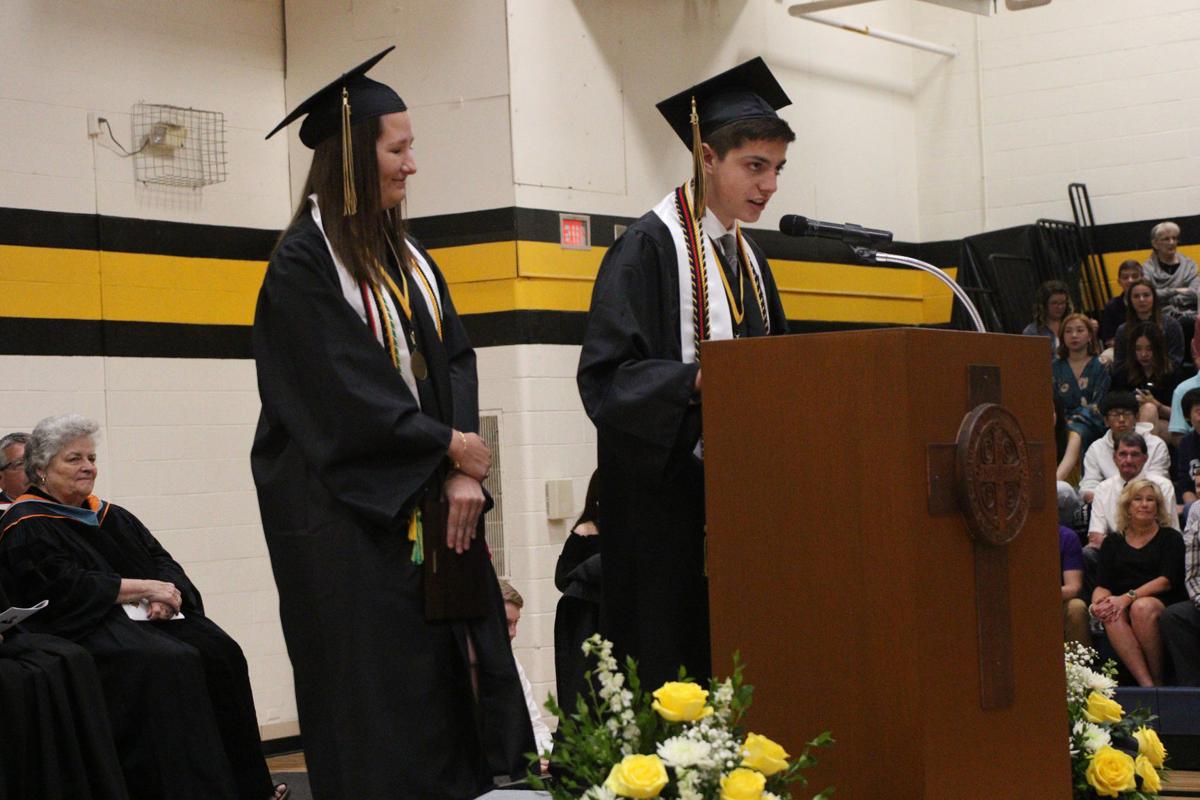 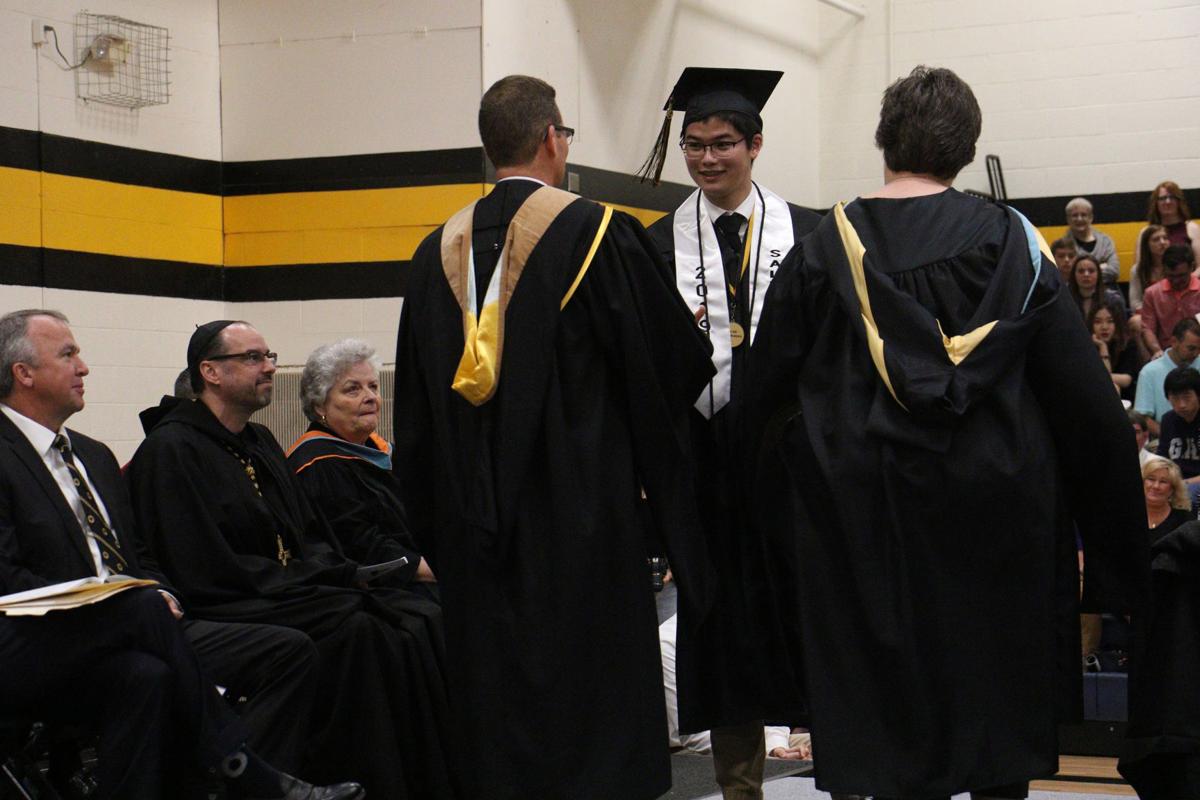 Kadejah Ross gives a thumbs up to loved ones supporting her graduation.

A student displays her intent to attend Missouri Western.

Members of the Class of 2019 await summoning to the stage.

MHMA students listen and react to the speech of the Valedictorians.

Atchison High School and Maur Hill-Mount Academy sent their graduating seniors off with pomp and circumstance on Saturday.

Local academic leaders spoke with confidence in declaring the of the 108 seniors graduating from AHS and the 65 seniors moving on from MH-MA to be fit for whatever challenge or opportunity might come their way.

“This class just radiates success in it,” said Phil Baniewicz, president and headmaster of Maur Hill-Mount Academy. “The academic level and scholarship amounts they reached were absolutely outstanding ... They just exceeded at about everything and they’re a very special class.”

The Maur Hill-Mount Academy student honorees included salutatorian Rongzhi Zhang, Skylar Clark and Dylan McConnell-Curry, class valedictorians. Clark and McConnell-Curry spoke to their peers alongside guest commencement speaker Billie Ellis, an MH-MA alumnus who has become one of the top-ranked attorneys in the nation in his Texas practice.

MH-MA said its graduating class drew students from six states across the nation and six nations overseas. The crop of Atchison students who graduated later in the day also come from diverse backgrounds.

Raven graduate Zach Schwinn said the day was bittersweet because they know this will most likely be the last they will be together.

“It was truly a bittersweet moment,” Schwinn said. “I think we all felt accomplished in what he have done at MHMA, but at the same time we realized we will be headed our separate ways to start the next chapter of our lives.”

Francesca Lameiro, selected as commencement speaker for the AHS Class of 2019, confessed that upon learning three years ago that her family would move to Atchison from Lisbon, Portugal, she mourned her homeland and feared her destiny. How could a proudly cosmopolitan European ever find a way to be accepted in rural Kansas?

“I was scared,” she said. “I was scared that I would have trouble adapting. But I’ve found such an amazing community here; I’ve made friends that I will keep for life. I’ve had educators that have transformed my views on pretty much everything. I’m so grateful that I did move and that I did have those experiences. I wouldn’t change anything.”

“I’m just very proud of all the connections that I’ve made in this district,” Lameiro said. “Being able to know that your peers and community leaders listen to you and that you make an impact, for that I am very grateful.”

Lameiro’s academic leadership in the National Honors Society — signifying her status as one of the top 10 percent among all high school graduates in the U.S. — is paralleled by the athletic accomplishments of Kadejah Ross, who excelled in soccer and basketball and is set to play soccer for the University of St. Mary in Leavenworth.

“Playing with my teammates will be what I’ll miss the most,” Ross said. “The feeling of them looking up to me and me being able to rely on them, that’s a unique thing. And my amazing coaches that I’ve had throughout the year, we have a special bond ... There’s a brighter future for me from here.”