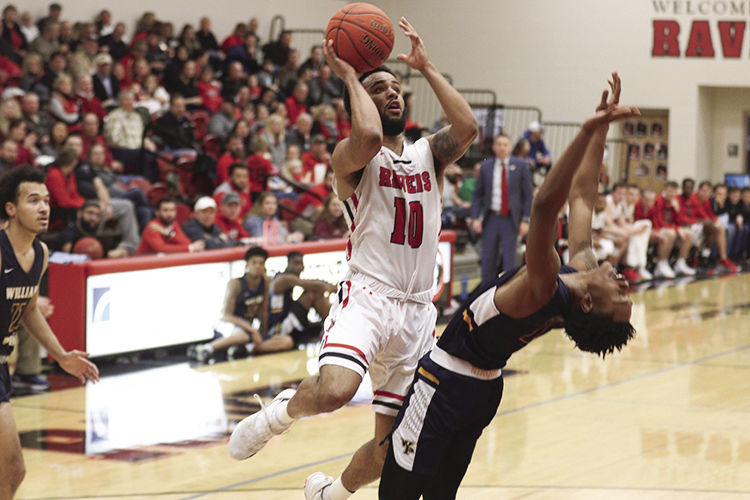 Benedictine junior Jaiden Bristol collides with William Penn junior Brandon Faison as he goes up for a basket Saturday at Ralph Nolan Gymnasium. 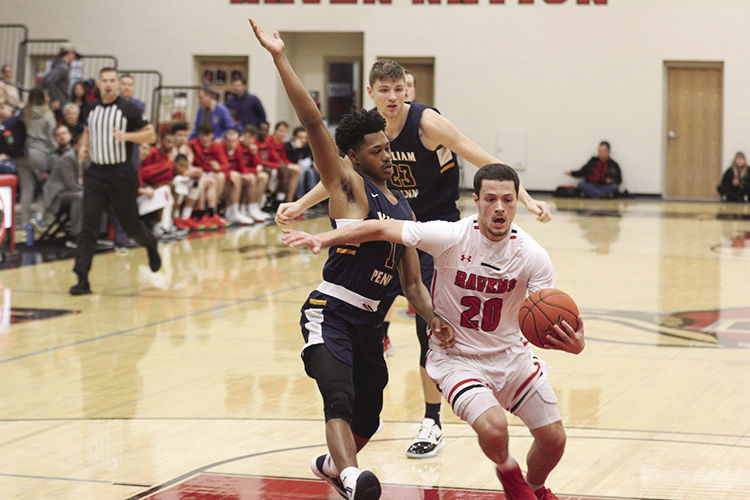 Benedictine junior Jaiden Bristol collides with William Penn junior Brandon Faison as he goes up for a basket Saturday at Ralph Nolan Gymnasium.

Benedictine earned what can only be called a signature upset win over No. 3 William Penn Saturday at Ralph Nolan Gymnasium.

The Ravens undoubtedly played their best game of the season so far in the 97-91 win over the explosive and dangerous Statesmen.

Coach Ryan Moody said the key to the momentous win was not being afraid and attacking the formidable opponent.

“We were aggressive,” Moody said. “We attacked the paint over and over. We had guys win some individual battles on offense and defense.”

The game was a stark contrast to the 84-58 blowout loss the Ravens suffered on the road to William Penn in November earlier this season.

Moody said the coaching staff stressed to the team that they needed to play around the rim instead of from the outside.

“We told them before the game we need to attack the rim and beat them,” Moody said. “Up there we played around the three point line and were almost tentative.”

The Ravens did indeed attack early and often in the game, which eventually led to a 25-9 lead with seven minutes and 25 second left in the first half.

Benedictine would take a 40-28 lead into halftime.

The Ravens even built a 56-37 lead early in the second half thanks to three consecutive shots made from beyond the arc by junior Matt Austin.

Austin hit five threes on the night and led Benedictine with 27 points.

“He’s a special scorer when he is feeling it,” Moody said. “We could see when he kind of got it going, so we kept running some sets to see if he could keep going and he banged a couple in.”

The Raven scoring barrage eventually built a 61-39 lead with under 15 minutes remaining, but the game was far from over with the athleticism and scoring capability of the Statesmen.

William Penn dwindled the lead down to 66-55 with ten minutes 30 seconds to go in the game.

“They just come at you in waves,” Moody said. “Especially when they are down like that and they are desperate. They are throwing it up and going and getting it. It’s kind of a Blitzkrieg mentality.”

The final ten minutes were similar to a prize fight with both competitors landing heavy blows that would shortly be answered on the other side of the court.

The Statesmen did get the lead down to 94-90 with under a minute to play, but the Ravens (12-9, Heart 10-5) were able to hold off the ferocious comeback attempt.

Austin said his team knew they had to be ready for the eventual run William Penn would go on.

“We knew it was coming at some point, but we just needed to be mentally ready to withstand the run,” Austin said.

“Our guys did a fantastic job of fighting through bad plays,” Moody said. “We didn’t hang our heads and say ‘oh my gosh here comes William Penn’ we just kind of got the ball back and executed.”

Moody said the best way to combat the danger of William Penn (17-2, Heart 11-2) in transition, to is simply be efficient on the offensive end.

“The best defense against transition offense is great offense on our end,” Moody said. “It’s hard to run taking it out of the net, so we needed to be aggressive and get good looks.”

Rebounding is something else that Moody said teams will not have the advantage when facing the length and athleticism of the Statesmen.

“You aren’t stopping them from getting offensive rebounds but you’ve got to keep fighting,” Moody said. “You have to be efficient on offense.”

The rest of the scoring effort was balanced for Benedictine with junior Jaiden Bristol and sophomore Eric Krus both having 12 points.

Junior Chris Jackson finished with 11 and sophomore Tyson Cathy had 10.

The upset victory was the first time all season the Ravens were able to put a completely healthy team on the court.

Austin said the team showed up motivated to show what they could do as a complete unit.

“We were just ready to come out and show the Heart of America what we are as a team,” Austin said. “Show that we can fight and play with anybody.”

The Ravens followed up the upset win by taking care of business against a lesser opponent Monday in an 85-58 over Grand View.

“The biggest concern was an emotional and physical hangover from Saturday,” Moody said. “After the first couple minutes we really settled down and defended really well tonight, which impressed me because I didn’t know how much energy we would have.”

Sophomore Jayden Temme had a game-high 24 points in the win over the Vikings, while Scott finished with 14.

Despite some notable recent road losses by the Ravens, Moody remains confident in his team heading into the month of February, or “moving month” as he calls it.

“You either move up or down in the standings during February,” Moody said. “If we can get and stay healthy, stay in the fight, keep guarding, use our depth and we’ll see what happens.”