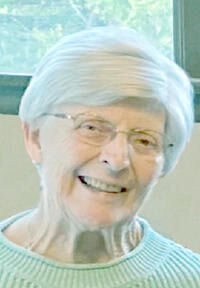 Mass of Christian burial will be Saturday, June 5, 2021, at 11 a.m. at St. Joseph Church with Rev. Jeremy Heppler, OSB as celebrant. Burial will follow in Mt. Calvary Cemetery. A parish rosary will be Saturday, beginning at 9 a.m. with visitation to follow until service time at the church.

Memorial contributions are suggested to St. Benedict Parish, St. Benedict Catholic School Playground Fund, St. Benedicts Abbey or Mount St. Scholastica and may be left in care of the Arensberg-Pruett Funeral Home with whom care has been entrusted.

Online condolences and memories may be shared at ww.arensbergpruett.com.

Earlene was born on Dec. 1, 1940, in Price, Utah, the daughter of Don and Adele (Bonza) Carlow. She attended grade school through high school at Notre Dame De Lourdes in Price, Utah. She graduated from Mount St. Scholastica College in Atchison in 1960 and later that year married Ernest J. Junior Hegarty on Aug. 20, 1960. Junior preceded her in death on July 4, 1994.

Earlene and Tom Wolters were married on June 29, 2001, and he preceded her in death on Feb. 24, 2003. Earlene and Jim Wilson were united in marriage on May 5, 2007, at St. Josephs Church in Atchison and just celebrated their 14th anniversary.

She began her employment as a chemist for Midwest Solvents and was with the company her entire working career. She was quickly promoted to Lab Manager which is the role she held until her retirement after over 40 years.

She was a faithful member of St. Benedict Parish where she participated at St. Joseph Church and was in the choir and a member of the church Altar Society. She delivered Meals on Wheels for the Project Concern for over twenty years and dedicated countless hours making and sharing rosaries with others.

Earlene was preceded in death by her parents; her husbands, Junior Hegarty and Tom Wolters; half-brother, Ferrol Carlow; half-sister, Gwen Bonza; and a sister-in-law, Mary Carlow. As published in the Atchison Globe.

To plant a tree in memory of Earlene Wilson as a living tribute, please visit Tribute Store.