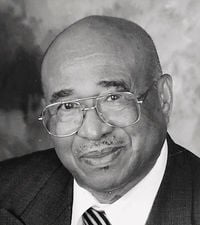 Claude was born to Luke Webb and Dorothy Washington, on Dec. 8, 1925, in Byhalia, Mississippi.

He confessed his belief in Christ at an early age, in Byhalia.

He enlisted in the United States Navy in 1944, and spent two years serving our country, including his call of duty in World War II.

He was honorably discharged and returned home to Byhalia, where he married the love of his life, Precious Australia Malone, on Sept. 15, 1946.

He also has a host of nieces, nephews and cousins that dearly loved him.

Claude lived and labored in Atchison, and the surrounding community, for over 60 years.

He served as the pastor of the Second Baptist Church, Hiawatha, Kansas, from 1983 to 2006 when he retired from pastoring, but continued his ministry.

From 1957 to 1983, he was the pastor of the Mt. Olive Baptist Church, later merged to form Shiloh, in Atchison.

When Reverend Webb felt the calling in his heart to become a man of the Lord, he said he knew he would answer it. He felt that God had a reason for putting him on this earth, and that was to spread his word. Even after being a pastor for over 50 years, the fire still burned the same in his heart.

He retired from the VA, in Leavenworth, Kansas, where he worked as a culinary chef and later volunteered.

He formerly served as the president of the Congress of Christian Education and the vice moderator of the Northeastern District Association.

He has officiated at numerous weddings, funerals and baptisms. He was truly a community pastor, he visited the sick and counseled those in need. He led by example and exemplified what being a missionary pastor truly meant, by personally touching thousands of lives.

To know him was to love him. He loved his family and his friends. His grandchildren will tell you that he made the best pancakes in the world.

He was an avid fisherman with his buddy, Mr. William Dudley, and hunter with his friend, Mr. Eddie Briggs. He shared long conversations with his dear friend, Mr. Marion Bud Kelly.

Visitation with the family will be from 4 to 6 p.m. Sunday, Jan. 12, at the Arensberg-Pruett Funeral Home.

Interment will be at 11 a.m. Tuesday, Jan. 14, at Leavenworth National Cemetery.

Care has been entrusted to the Arensberg-Pruett Funeral Home.

Condolences and memories may be shared online at www.arensbergpruett.com. As published in the Atchison Globe.