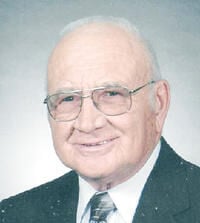 Charlie was a farmer and stockman his entire life, and also worked in several lumberyards as a manager including: Easton Lumber, the Lancaster Coop Lumberyard, until its closing, and Carrigan Lumber. He was a diligent carpenter, building four houses that he lived in throughout his life.

He volunteered on the Easton City Council, Easton Volunteer Fire Department and as chairman of Atchison County RWD #2. He was a part of the Atchison County Cornshuckers.

Charlie enjoyed the history of his family and Atchison County in his retirement, but was most proud of being a father, grandpa, great grandpa and coach.

Memorial contributions are suggested to Atchison County Historical Society or St. Benedict Parish for Mass Intentions for Charlie and may be left in care of the Arensberg-Pruett Funeral Home.

Online condolences and memories may be shared at www.arensbergpruett.com. As published in the Atchison Globe.

To send flowers to the family of Charles Wagner, please visit Tribute Store.

© Copyright 2021 Atchison Daily Globe, 308 Commercial Street Atchison, KS | Privacy Policy
Powered by BLOX Content Management System from TownNews.com.
In these changing times, the Atchison needs fact-base local journalism more than ever.
For 143 years, the Atchison Globe has been here to find the truth, to inform you and keep you safe.
Unlimited Digital Access
Buy 8 Weeks, Get 4 Weeks FREE