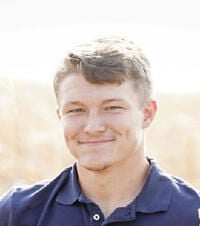 Memorial contributions are suggested to the Atchison County Community Schools Foundation and will be put towards the building of the new gymnasium and may be left in care of the Arensberg-Pruett Funeral Home with whom care has been entrusted.

Colby was born on June 23, 2004, at the Atchison Hospital at 6:18 p.m. the oldest son of Gregory A. and Stacey (Bennett) Smith. He attended Atchison County Community Schools and was currently a senior at the high school. There is no doubt that he kept the entire school staff on their toes at all times. He was a great athlete and played football and excelled at wrestling. He was a member of the Effingham Wrestling Club since he was just a young kid and in middle school he was known as the Lunch Box Kid. He was part of the Kansas National Wrestling Team and wrestled on several traveling teams, including the O-Team.

Colby can be summed up as an All-American Kid and was loved by so many. He was adventurous, funny, witty, enjoyed four-wheeler riding, having people over to his house and if you asked him, he was a for sure stud-muffin. He loved his chocolate milk and Oreo cookies and as a child he loved Thomas the Train. Colby enjoyed inventing games whether they were considered appropriate or not and building things with his friends; he even constructed his own deer blinds. He was well known for his general mischief and horseplay and was always a part of any kind of prank. He was considered a good friend to many, made numerous friends from other schools and would always tell people, Be nice to everyone.

He was preceded in death by his grandma, Ruth Bryant. As published in the Atchison Globe.