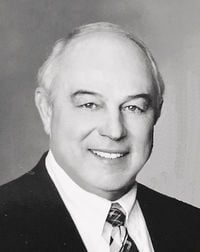 A parish and Knights of Columbus rosary will be recited Tuesday, June 11th at 6 p.m. with the family to receive friends following until 7:30 p.m. at the funeral home.

Memorial contributions are suggested to Maur Hill-Mt. Academy or St. Benedict Parish and may be left in care of the Arensberg-Pruett Funeral Home with whom care has been entrusted.

Condolences and memories may be shared at www.arensbergpruett.com.

Larry was born Oct. 29, 1939, in Stranton, Nebraska, the son of Hugo and Irene (Kletchka) Siebenmorgen.

He and Rita M. Heintzelman were united in marriage on Sept. 14, 1963, at St. Lawrence Church in Easton, Kansas.

Larry was employed at Blair Milling and Elevator Company and he sold real estate for Wilson Realty, Inc. Larry was a licensed auctioneer for approximately 20 years for Staley-Dierking Auctioneers. He retired from Philip H. Jones Company after working as a manufacturers rep for 27 years.

Larry enjoyed hunting, trapping, carpentry, and anything involving his grandsons.

He was preceded in death by: his parents; an infant brother; and three brothers-in-law, Jerry Heintzelman, Wayne Hetz and John Rosencutter. As published in the Atchison Globe.