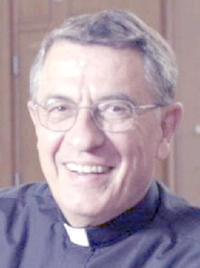 Abbot Barnabas Senecal died peacefully at the Abbey early on Tuesday morning, Dec. 7, 2021. He had been fortified by the Sacraments of the Church and the Apostolic Pardon. Several monks and health care workers were present with him when he died.

On Oct. 16, 1937, Tom Senecal (the future Abbot Barnabas) and his twin brother, Tim, became the newest members of the Senecal family. Growing up in Atwood, Kansas, all of the Senecal children would ultimately attend Catholic boarding school in Atchison, Kansas. There Tom would take his first steps on the journey toward the priesthood as a student at Maur Hill Prep School. After graduation, he became a hilltopper at St. Benedicts College, the residence program for men interested in the priesthood and religious life. On July 10, 1957, he became a novice of St. Benedicts Abbey, receiving the name Barnabas. One year and a day later on July 11, 1958, he professed his first vows as a monk.

Abbot Barnabas taught Religion and was a prefect in Freshmen Hall at St. Benedicts College, 1964-1965. From 1965 until 1968 he was Assistant Pastor at St. Joseph Catholic Church, Atchison.

Abbot Barnabas was preceded in death by his parents, John and Clara; his sister, Clare; by his brothers, Father Gerard Senecal, OSB, William, and Richard; by his nephews, William Jr, and Steven; and a brother-in-law, Ronald Hansen.

He is survived by his twin brother and sister-in-law, Nicholas and Katy, Hyde Park, Maryland, and by his sister, Mary Hansen, and numerous nephews and nieces.

Vespers for the Dead, followed by visitation, will be prayed on Monday, Dec. 13, at 7 p.m. in St. Benedicts Abbey Church. The Mass of Christian Burial for Abbot Barnabas will be celebrated in St. Benedicts Abbey Church on Tuesday, Dec. 14, at 10:30 a.m., with interment following in the Abbey cemetery. Abbot will lie in state on Monday at the Arensberg-Pruett Funeral Home.

A legacy fund has been established in Abbot Barnabas and memorials in his honor may be made at this link or by mailing a check to St. Benedicts Abbey, 1020 N. Second St., Atchison, KS 66002. As published in the Atchison Globe.