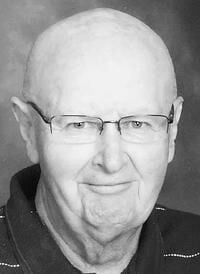 Parish and Knights of Columbus rosary was recited on Wednesday, at 10:30 a.m.; visitation followed until time of mass. Interment was in Mt. Calvary Cemetery.

He attended St. Joseph Grade School in Nortonville and graduated from the Nortonville High School.

He and Theresa E. Wohletz were united in marriage on Jan. 19, 1963, at St. Benedicts Church in Atchison, Kansas.

Dale served with the Atchison Fire Department for 31 years, from 1959 to 1990, where he began as a firefighter and worked his way through the ranks eventually serving as a Captain/Platoon Commander. During his years at the department, on his days off he was employed at Coopers Foundry, for Luther Campbell, Atchison Construction, and later with Mike Hundley, Hundley Construction. After retiring from the fire department he worked as a custodian for Atchison Catholic Elementary School and St. Benedicts Church. He was a self-employed painter and refinished woodwork in several historic homes in Atchison.

Dale was preceded in death by a sister, Linda Talley and four brothers, Kenneth Schneider, Richard Schneider, John Paul Jack Schneider and Harold Schneider; half brothers, Charles and Edgar and a half-sister, Ellen. As published in the Atchison Globe.