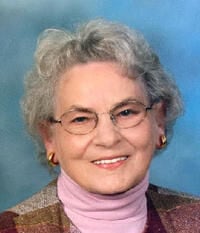 Mass of Christian burial will be Monday, February 22, 2021, at 11 a.m. at St. Benedicts Catholic Church with Rev. Jeremy Heppler, OSB as celebrant. Interment will follow in St. Augustine Cemetery, south of Sabetha, Kansas. A parish rosary will be recited on Monday at 10 a.m. at the church with visitation following until 11 a.m.

Memorial contributions are suggested to Northeast Kansas Multi County Hospice or American Cancer Society or American Heart Association and may be left in care of Arensberg-Pruett Funeral Home with whom final care has been entrusted.

Dolores was born July 19, 1926, in Estherville, Iowa the daughter of Peter and Ann Snyder Hoffman. She attended elementary school in Vail, Iowa graduating from Vail High School. She then attended a business school in Omaha, Nebraska.

Dolores and her husband formed the Green Acres Farm Paper where she was a typist and print setter for 32 years until they sold the business.

She was a member of St. Benedict Parish in Atchison. She was a member of Catholic Grandparents Association. In her spare time she enjoyed cooking; making pies and harassing her son-in-laws, however she was very fond of all of them. She made sure everyone felt as though they were the most important in her life. As a child she would bottle feed the lambs on the family farm. Dolores was also an avid sports fan never missing a Kansas City Royals or Kansas City Chiefs game on television and watching KU basketball and all March Madness Basketball games.

Dolores was preceded in death by brothers, Ambrose, Raymond Shorty, and Richard Rich Hoffman. As published in the Atchison Globe.

To send flowers to the family of Dolores Pokorny, please visit Tribute Store.