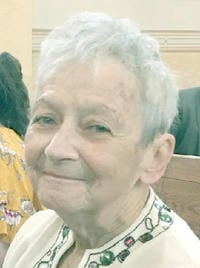 In lieu of flowers, memorial contributions are suggested to the Wounded Warrior Project and may be left in care of the Arensberg-Pruett Funeral Home. (A memorial and internment at St. James Church in Setauket, New York, will occur at a later date.)

Margaret was born January 30, 1938, in the Bronx, New York, the daughter of Edward and Rose (Irwin) ONeill. She attended St. Marys School of Nursing, graduating in 1960. She later attended Stonybrook University graduating in 1972, and attained her Masters degree in Hospital Administration from CW Post University in 1974.

A true pioneer in psychiatric nursing, Peggy (as she was known) was the first woman and first non-MD executive director of what was at the time the nations largest psychiatric hospital (Pilgrim State in Brentwood, New York) from 1979-1985. In 1983, she was the recipient of the Clara Barton Humanitarian Award of the American Red Cross. She later was outreach coordinator for Good Shepherd parish in Holbrook, New York, and served as a member of the advisory board for the Gerontology Center at Columbia Universitys School of Medicine as well as the advisory board of the Benedictine College Nursing program.

Prior to moving to Atchison, she was a longtime member of St. James Parish in Setauket, New York. She moved to Atchison in 2016 and joined St. Benedict Parish.

She was preceded in death by her parents, Edward and Rose ONeill; two brothers, Edward ONeill and John ONeill; a sister, Anna Mulholland; a niece, Eileen ONeill; and a nephew-in-law, Jay Spencer. As published in the Atchison Globe.