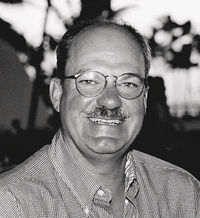 Tod was a skilled storyteller. With his radio voice and eloquent delivery, he told stories of his days as a wildcat oil driller and sailing adventures around the world.

He had a fabulous sense of humor and his ability to deliver a punch line was uncanny.

Tod found great joy on the water sailing the San Francisco Bay on his beloved sailboat, Mythical. He served as crewman, in the Swan World Cup, representing the St. Francis Yacht Club, in Sardinia, Italy, and won two National and one World Cup Championships, in the Etchells sailboat class.

He was a certified master scuba diver and earned his second degree black belt, in karate.

Born in Minnesota, to Alfred D. McKelvy, of Atchison, Kansas, and Doryce Kellerman, of New York, Tod was raised in Atherton, California.

He attended high school at Menlo School, where he played football and soccer. He went on to attend the University of Puget Sound, where he was captain of his soccer team, vice president of the student body, studio guitarist for Three Dog Night and was a member of the Adelphian Concert Choir, performing around the world. Tod was a talented musician, sang in the Bohemian Club Mens Chorus, played guitar in a folk group, and sang in an acapella assemble. He had the honor of playing with the Kingston Trio, as well as other notable musicians and artists.

A man of many and varied accomplishments, Tod was a managing partner, of McKelvy Properties LLP, president, of McKelvy Oil and Petroleum Company, founding director, of Diablo Valley Bank, chief operating officer, of Berding and Weil, LLP, and served on boards of Purisima Funds, BOMA East Bay, and the Bohemian Club.