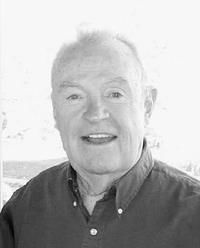 He graduated from Maur Hill Prep and earned his bachelors degree in economics from St. Benedicts College, in 1961.

He and his beloved wife, Jacqueline White, were united in marriage on March 2, 1957, in St. Marys, Kansas.

They began their family in Atchison, before moving to Wamego, Kansas, in 1963. While in Wamego, he owned and operated a pizza place named The Meat Block. They then moved to Manhattan, Kansas, where he worked for Porters Paints as a sales rep, working hard to support his family.

In 1979, he and his family returned to Atchison, where he purchased Mullins Hardware and operated it as Kelly Hardware until the late 1980s. He was a great salesman because of his ability to converse with anyone. After selling the hardware store, Larry went to work for the State of Kansas at the employment office, until his retirement.

Larry served in the United States Air Force from Jan. 22, 1953, until his honorable discharge on Jan. 21, 1957, having served in Korea. Larry was always proud of his service to his country often telling stories about his time in the military. During his service, he played fast pitch softball, he was an amazing pitcher, even pitching for other branches of the military.

He loved sports, whether it was baseball, football, watching college basketball or attending horse races with his wife and friends. Even after his discharge from the Air Force, Larry continued to play and travel with fast pitch softball teams, he also coached his daughters in softball.

He enjoyed mushroom hunting and introducing new people to this hobby.

Larry had a knack for fixing things; he would always try before taking it to someone else.

Above all Larry loved his family, and was extremely proud of his children and grandchildren.

He was preceded in death by: his wife; two brothers, Edward Kelly and Ralph Kelly; and two sisters, Mary Grame and Patricia McDonald.

Because of current restrictions, a private family Mass of Christian burial will be held at St. Benedict Church.

Memorials are suggested to: St. Benedict Parish or Maur Hill-Mount Academy, and may be left in care of the funeral home.

A Memorial Mass and celebration of life for all to attend will be held at a later date. As published in the Atchison Globe.