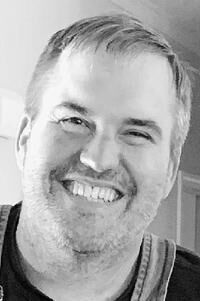 Michael Scott Horton wrapped up his final Harvest season, and his body decided it was time to retire the overalls. He did not lose the fight with cancer, at the very least, it was a tie, and he took it out with him.

Mike was born in Atchison, Kansas, on Oct. 9, 1973, the youngest of two sons, born to John and Nancy Horton. He has lived there his entire life.

Mike went to Catholic School all the way through his Junior year, when he decided he had pulled all the pranks he could, and instead of cutting his beloved mullet, he would transfer to Atchison High. They happily accommodated his hairstyle, and it, along with his charisma, secured a Homecoming King victory in the fall of 1991. If you didnt know he was Homecoming King, you must not have ever met him.

Although Mike will always be remembered for his booming voice and distinctive laugh, he will be missed most for his friendship, loyalty, and love for his family. For some, it will be his overalls and tennis shoes. For others, it will not be.

The greatest accomplishment in his life was the beautiful family he created with his loving wife, Robin. His daughters, Molly and Lucy, and his favorite boy, Reid, were his pride and joy.

Mikes career and love was farming. He also loved talking farm with his dad and friends, classic cars, laughing at his own jokes, running his skid loader, and stressing out his mom. He did not love meatloaf, imperfect corn rows, or their dog Milo, but the kids and wife do, so he tolerated him.

Cancer was part of his life for the past 5 years, but he would not allow it to control him or define him. All he ever asked for was more time with his kids, and he did everything he possibly could to make that happen. He only ever played the "cancer card" when absolutely necessary, like trying to get in free to football games.

Mike is survived by everyone who loved him. Most notably, his parents, John and Nancy Horton, of Atchison; his brother, Tom, and wife Jenny, of Basehor; his wife of nearly 11 years, Robin (Osterhaus), and their three children, Molly, Lucy, and Reid, of the home. Honorable mention goes to the two dogs, Milo and Louie, a horse, a hamster, nieces, nephews, and a few hundred or so in laws.

He is preceded in death by his maternal and paternal grandparents, and his favorite dog, Zeus.

To honor Mike, contributions may be made to the Leukemia and Lymphoma Society, or just check the grain market several times a day, as he would. As published in the Atchison Globe.