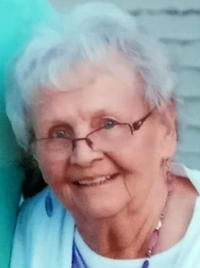 A con-celebrated Mass of Christian burial will be Tuesday, April 6, 2021, at 11 a.m. at St. Joseph Church with Rev. Jeremy Heppler, OSB and Rev. Dan Gardner as celebrants. Interment will follow in Mt. Calvary Cemetery. A parish rosary will be recited at the church on Tuesday, at 9:30 a.m. with visitation to follow until 11 a.m.

Memorial contributions are suggested to St. Benedict Parish or St. Benedict Catholic School and may be left in care of the Arensberg-Pruett Funeral Home with whom care has been entrusted.

Joan was born on May 28, 1932, in Racine, Wisconsin, the daughter of Frank and Edna (Gurkee) Gursky. She graduated from St. Catherine High School in Racine.

She began her employment with the FBI in Washington, D.C. and while there she met Harry D. Hennigh and the two would later be married on June 28, 1952, in Racine, Wisconsin. Mr. Hennigh preceded her in death on November 7, 2018.

Joan and Harry initially made their home in Racine, and later moved to Kansas where she was a Bank Teller at Exchange Bank and Valley State Bank until her retirement in 2002.

Joan was a devout Catholic and a member of St. Benedict Parish in Atchison; her entire life centered around her faith. She taught CCD in Sabetha, Kansas, was a member of the Sacred Heart Church Altar Society and served funeral dinners at Sacred Heart for many years.

She enjoyed gardening and trips to Colorado to bring home new rocks for her garden. She was a great cook, but most of all she was a wonderful grandmother and spent her retirement caring for her grandchildren. She always worried about the well-being of her children and her family.

She was preceded in death by her husband, a son, Mark Hennigh and a brother, James Gursky. As published in the Atchison Globe.

To plant a tree in memory of Joan Hennigh as a living tribute, please visit Tribute Store.