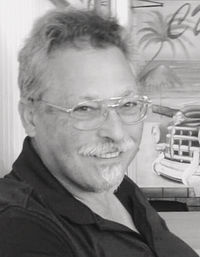 He attended elementary schools in Hialeah, Florida, and graduated from Hillsdale High School, in San Mateo, California. He then attended and graduated from San Franciso State University, San Francisco, California, where he studied biology and chemistry, and received a bachelor of science degree and a teaching certificate from Sonoma State University.

Enrique formerly taught in Sonoma County, California, then in Richfield, Idaho, then at Riverbend School, in Atchison, and currently was teaching science classes at Doniphan West High School, Highland, Kansas.

He was a member of St. Benedict Parish, Atchison, and Resurrection Parish, in California.

In California, members of the Howard and Franceschi families, and many teachers and students from the Atchison, and Richfield, Idaho, and Sonoma County areas.

After mass there will be time allotted for memories to be shared and a meal will follow at St. Josephs Church, 705 Spring Garden, Atchison.

Memorial contributions are suggested to the American Diabetes Association, and may be mailed to: P.O. Box 15829, Arlington, VA 22215. As published in the Atchison Globe.