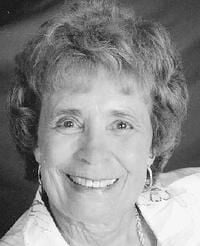 She was born May 9, 1943 to James and Genevieve Jean (Ingersoll) Barmann.

She worked at American Angus Association as a computer operator in the Information Systems department for 46 years before retiring in May 2008.

Phyllis was a member of St. Francis Xavier Church and volunteered at The House of Bread.

Her grandchildren were the light of her life. Phyllis always attended any event they participated in. She loved traveling, visiting the lake and her walks with her friend, Shelby Corf. When Phyllis was younger, she and her twin, Dick, would put on dance shows. Phyllis love of dancing continued throughout her life.

She was preceded in death by her two husbands, Jerry and Dennis; parents; and twin brother, Dick Barmann.

The family will gather with friends 2 to 4 p.m. Sunday, Meierhoffer Funeral Home & Crematory.

Flowers are appreciated and for those wishing to make a contribution, the family requests they be made to St. Francis Xavier Church The House of Bread or Pancreatic Cancer Action Network at Pancan.org. Online guest book and obituary at www.meierhoffer.com. As published in the Atchison Globe.