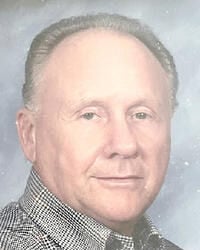 He and Marion Francis Wagner were united in marriage in Feb. of 1965, at St. Patricks Church in Atchison.

Paul proudly served his country in the United States Navy.

Paul was always a hard worker and had very high standards for everything he did. He was a talented carpenter and woodworker, was a mechanic for TWA/American Airlines and enjoyed farming, trucking, cars and working in his shop.

He was a member of St. Benedict Parish in Atchison and the Sacred Heart Council #723 of the Knights of Columbus.

He was preceded in death by his parents and a brother-in-law, Glenn Noble.

Paul will be cremated, under the care and direction of the Arensberg-Pruett Funeral Home and services will be held at a later date.

In lieu of flowers, memorial contributions are suggested to St. Benedict Parish.

Cards may be sent to his family, addressed to: Marion Blodig, c/o Stratford Commons, 12340 Quivira Rd, Overland Park, KS 66213. As published in the Atchison Globe.