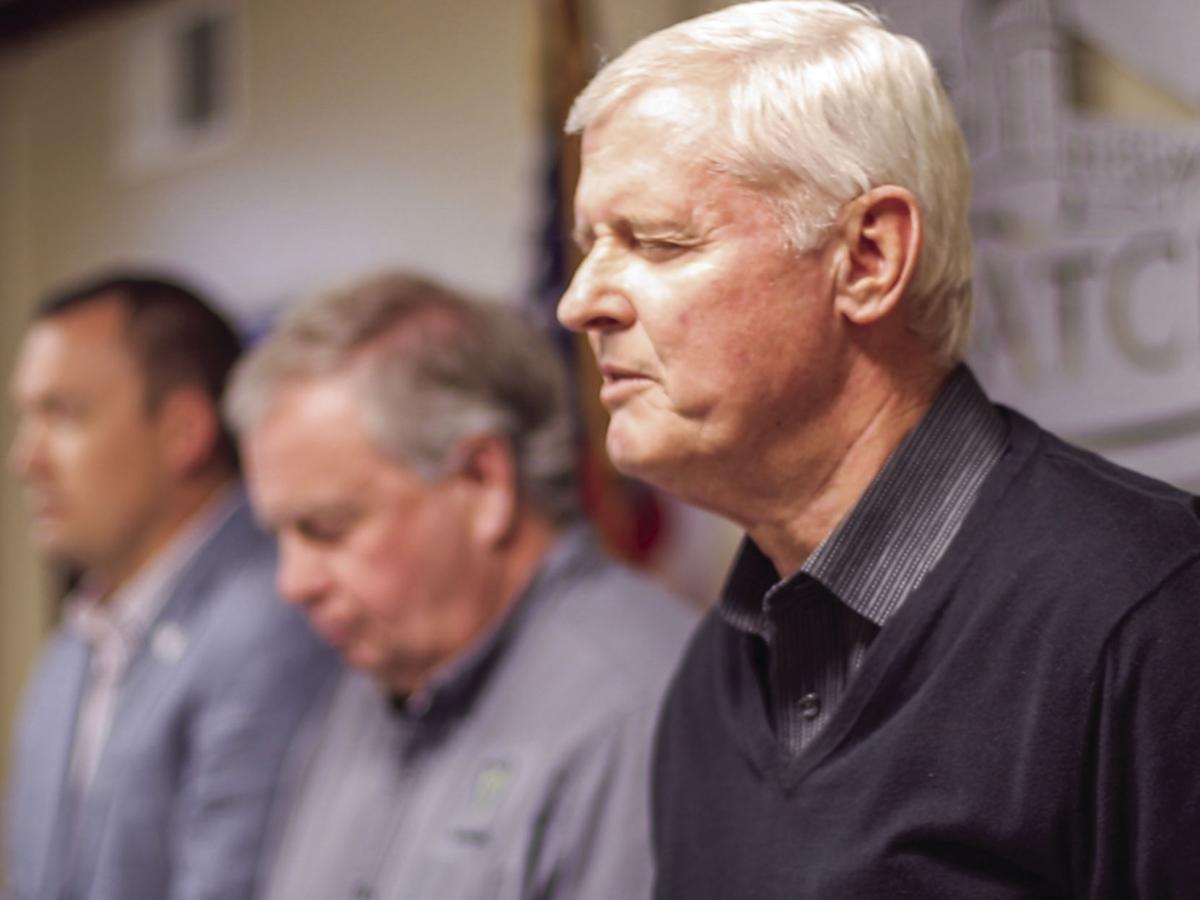 Commissioner Dave Hausmann leads a memorial prayer on Monday evening in honor of the late Larry Purcell, thanking God for gracing Atchison with Purcell’s determination to serve his friends and neighbors. 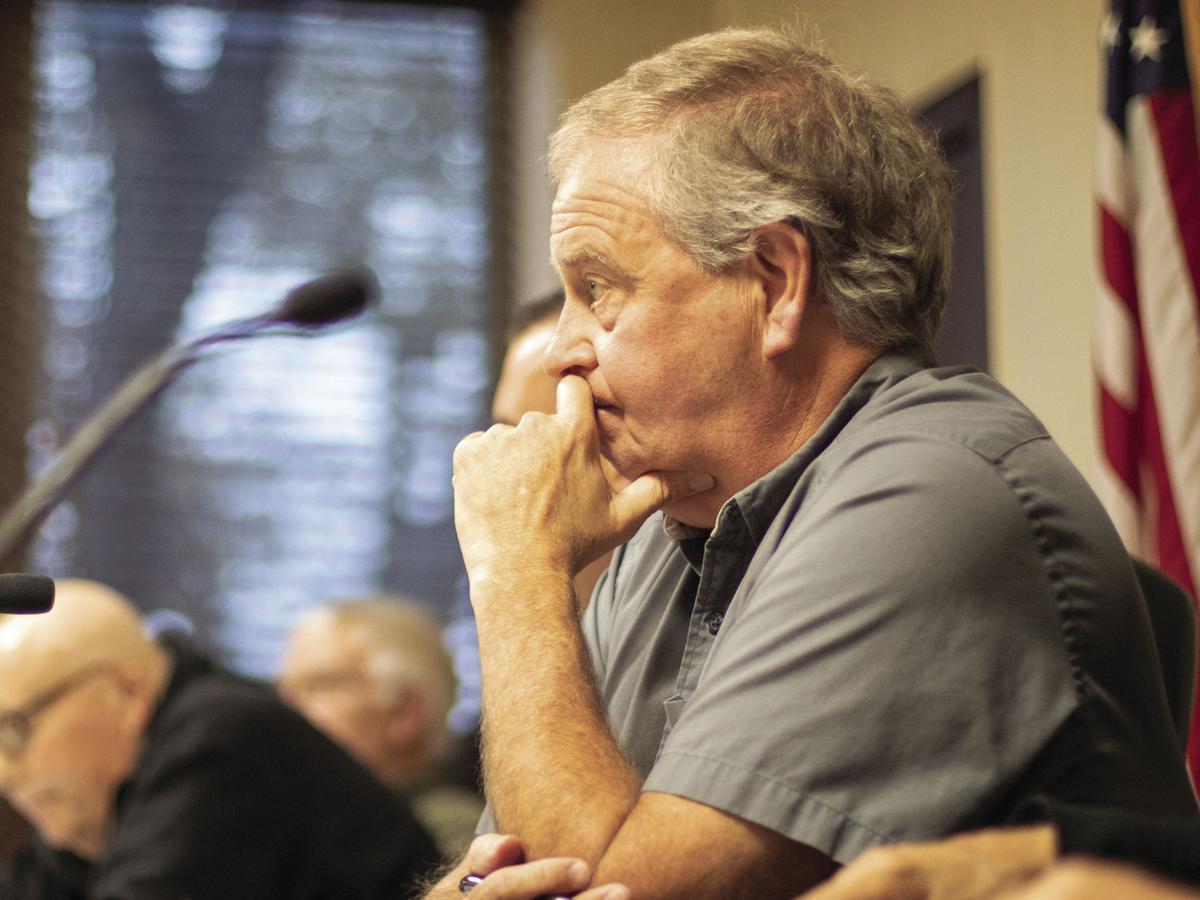 Vice Mayor Allen Reavis takes a moment to contemplate his experiences serving alongside Larry Purcell, who held a seat on the City of Atchison City Commission for more than 20 years, through 2017. Purcell died Saturday at 83. 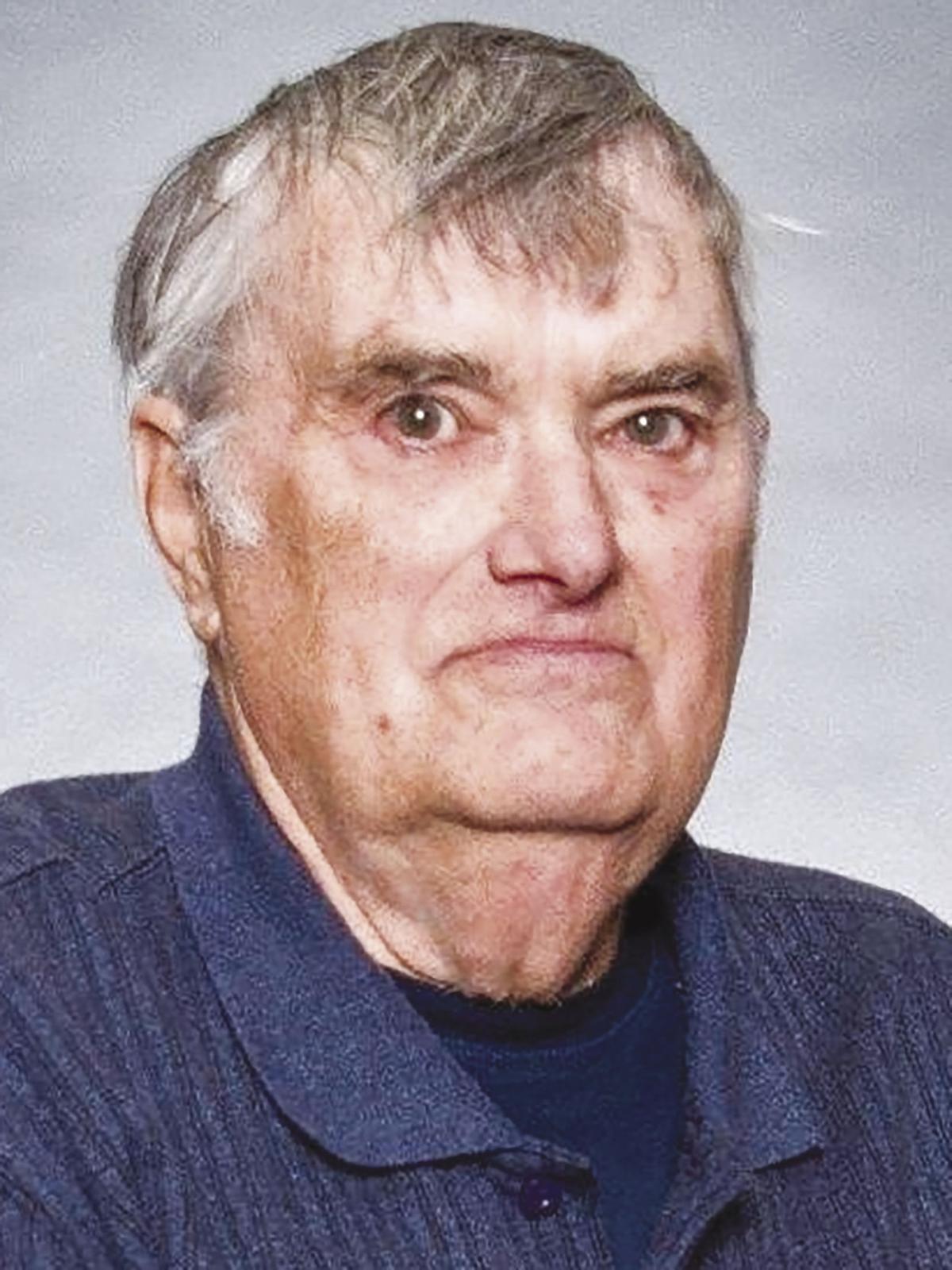 Commissioner Dave Hausmann leads a memorial prayer on Monday evening in honor of the late Larry Purcell, thanking God for gracing Atchison with Purcell’s determination to serve his friends and neighbors.

Vice Mayor Allen Reavis takes a moment to contemplate his experiences serving alongside Larry Purcell, who held a seat on the City of Atchison City Commission for more than 20 years, through 2017. Purcell died Saturday at 83.

To some, Larry Purcell leaves behind a legacy as the plumber who, devoted for decades to his community, fixed much more than leaky pipes. He was the man who mended hearts and inspired minds across Atchison.

Purcell, 83, died Saturday of natural causes after consecutively serving his constituents from the early 1990s until 2017.

Murphy and Purcell served together on the Atchison City Commission for four years from 1998 to 2001, Murphy said, and he shared his belief that Purcell, who served for more than 20 years, has had perhaps the longest consecutive run of office in the history of Atchison’s municipal government.

The two men didn’t always agree, Murphy admitted. Purcell would often be controversial, Murphy said, and in the end he would do what he thought was the right thing for the people he represented.

Having Purcell on the commission was a good thing, Murphy said, because he would always look at many of the matters from a different perspective. It was sort of refreshing because it wasn’t done to be contrary, but for the benefits of constituents.

“He threw questions out there that need that needed answers,” Murphy said. “He (Purcell) was not a traditional commissioner.”

Atchison Police Chief Mike Wilson said Purcell’s death is sort of a tragic loss of a great man in the community. Wilson recalled the two of them came into their latest positions in city government at about the same time, in the mid-1990s (Wilson has been part of APD since 1977). As far as his leadership with the city government, Purcell was always supportive of the police and their needs, Wilson said. Sometimes issues and special requests would come up, but once the need was explained, Purcell was supportive.

“He was a good friend,” Wilson said. “He would routinely visit and stick his head in the door to say hello.”

Purcell was a self-employed plumber, heating and cooling specialist for more than 45 years, according to his published obituary by Arensberg Pruett Funeral Home. Purcell served in the U.S. Army from 1954 until his honorable discharge in 1956. He was a member of the V.F.W. and Fleming-Jackson-Seever Post No. 6 of the American Legion. Purcell was employed at Atchison Hospital and owned and operated Purcell’s Landing along the Missouri River in Atchison.

Legionnaire John Kane was a few grades ahead of Purcell when the two of them attended St. Patrick’s School, south of Atchison. It was back when about 20 years ago when there was a large Veteran’s Day Parade in Atchison. There were about nine WWII and Korean War veterans, all former St. Pat’s schoolmates, who rallied together for the parade, Kane said.

“We had two cars loaded to the gills with guys from St. Pat’s,” Kane recalled. “Larry Purcell carried an American Flag and walked with us.”

“Atchison lost a great one in Larry Purcell,” Rizza said. “I never had the privilege to serve with him on the City Commission, but he showed his devotion to Atchison by putting in over 20 years of service. Larry was so respected by the Commission that he continued to represent us on the County Corrections Board even after leaving office.

See how much the world's largest Snickers bar weighs

“You could always count on Larry to tell you like it was and not sugar coat things. He will be missed by those he worked with, and our prayers are with his family as they celebrate his life.”

Purcell and Joe Butner shared a longtime acquaintance. Butner said he was much younger when got to know Purcell. Often Butner would visit with Purcell while he would work on the refrigeration equipment.

“He was knowledgeable about mechanics and laid back as he would diagnose the problems,” Butner said, adding that he always looked up to Larry because he had a laid back ability and not get worked up about the everyday life things.

Purcell was a brilliant man who gave great advice and always had the best solutions, Butner said. He described Purcell as a level-headed person.

“He was so funny in just his simple way,” Butner said. “He is one man who will certainly be missed — always and truly a friend.”

A visitation with family will take place from 6 to 8 p.m. Friday, Nov. 8 at the Arensberg-Pruett Funeral Home. A memorial service will be at 2 p.m. Saturday, Nov. 9 in the chapel at the funeral home. Inurnment will follow in Mt. Calvary Cemetery.