Sign Up
Log In
Purchase a Subscription
You are the owner of this article.
Edit Article Add New Article
You have permission to edit this article.
Edit
Home
e-Edition
News
Sports
Obituaries
Schools
Voices
Community and Lifestyles
Special Sections
Multimedia
Classifieds
1 of 5 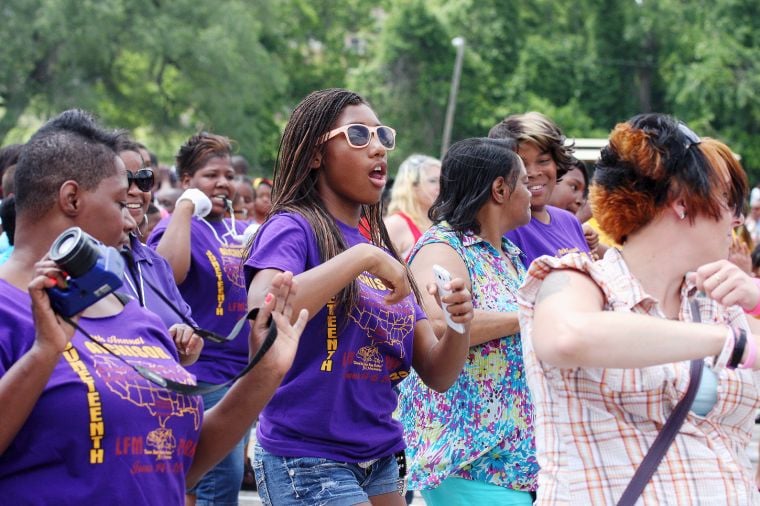 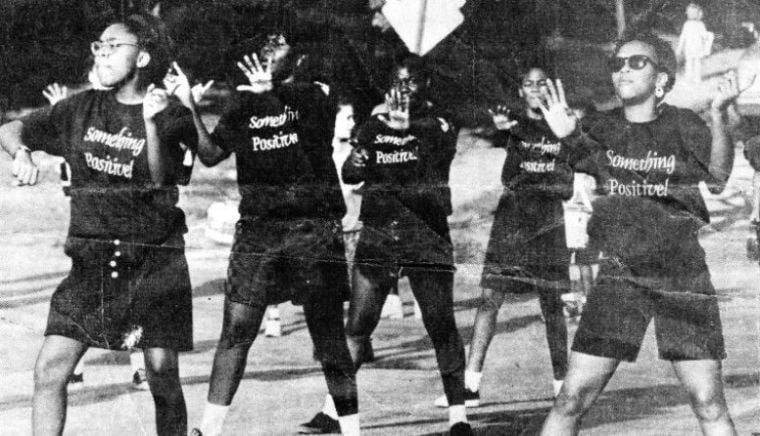 Some original Top Dog steppers in June of 1994. 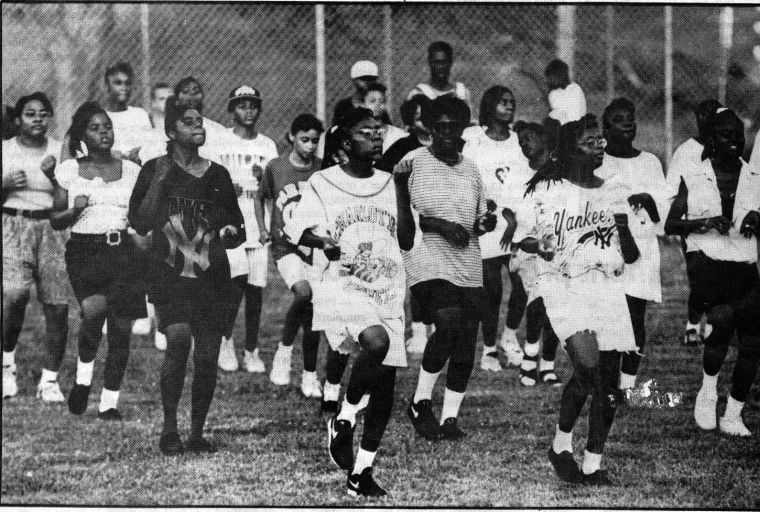 A portion of the original 1994 Top Dog Drill team 20 years ago at LFM Park. 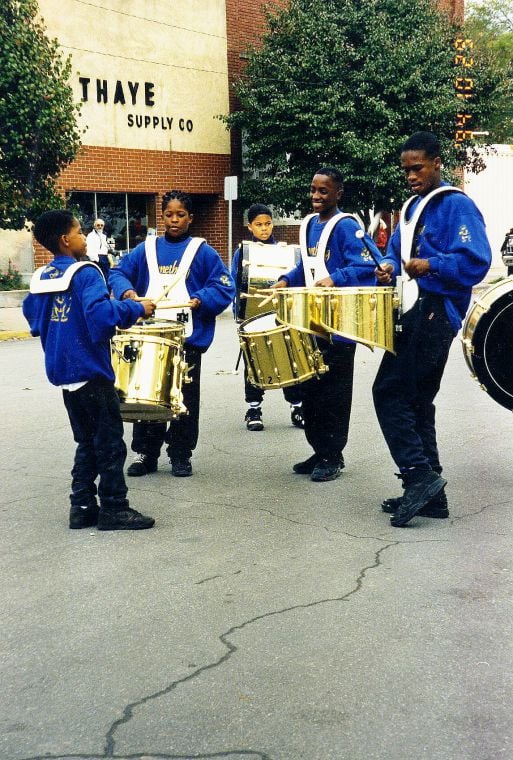 The original drummers with newly purchased drums play a quick tune during lineup for the 1994 annual Halloween parade. 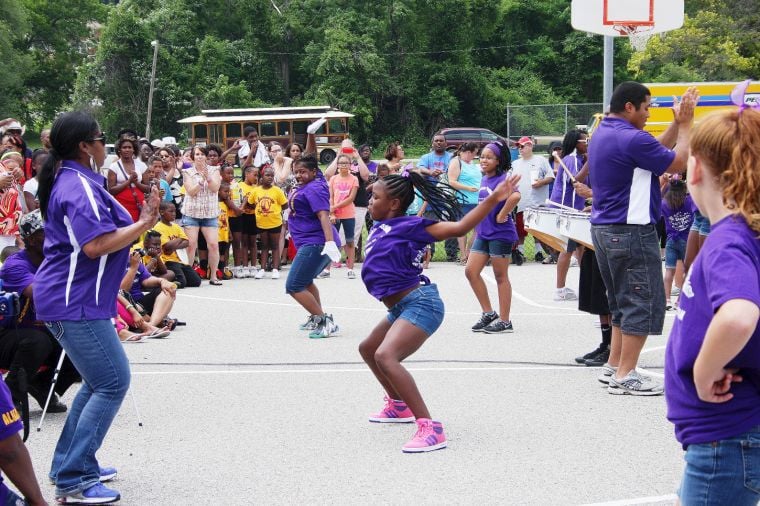 Top Dawg Drill Team is a top attraction at the annual Juneteenth celebration slated for the June 10 to June 12th weekend in the Atchison community.

Some original Top Dog steppers in June of 1994.

A portion of the original 1994 Top Dog Drill team 20 years ago at LFM Park.

The original drummers with newly purchased drums play a quick tune during lineup for the 1994 annual Halloween parade.

Top Dawg Drill Team is a top attraction at the annual Juneteenth celebration slated for the June 10 to June 12th weekend in the Atchison community.

After 20 years, Atchison’s own Top Dog Drill Team is still moving and grooving to a positive beat in the community.

In June of 1994, Isaac Blakley and Bonnie Birch founded the group with encouragement from Mayme Worthwell and Dorothy Whitely.

Janet Smith, a longtime booster and Top Dog director, credited Worthwell and Whitely for their influence in Blakley’s decision. Smith said Blakley and Birch invited the St. Joseph, Missouri-based No Ethnicity Drill Team to come perform at LFM Park in Atchison. Smith said No Ethnicity put on a dynamic performance. Afterward, Blakley and Birch initiated the Top Dogs with more than 100 Atchison area youth, who signed up to enroll in the community’s inaugural group.

Smith recalled a committee, comprised of the youth involved, named themselves Atchison Top Dog Drill Team. Committee members also chose the colors and dogs for each stepping unit like Poodles for preschoolers to second graders, Dalmatians are the youngsters up to the intermediate school age; Dobermans are the intermediate, middle and high schoolers; and members of the drum corps are Bulldogs and Rottweilers.

Smith presented Williams and Downing with plaques to recognized their efforts during the ninth annual Juneteenth celebration Saturday at LFM Park.

“These young people stepped up,” Smith said. “They came and asked (to help) and are doing a wonderful job.”

Smith said when Williams approached her about leading the steppers it brought tears to her eyes. Williams’ passion for volunteering has not wavered since.

Smith said Sheila Crittendon, one of the initial parent volunteers, came up with the motto – “Something Positive.” From that point a vision statement was developed: “Movin’ our feet; to one beat! Something positive! For the community!”

Atchison businesses provided the means to purchase uniforms. A committee comprised of youth designed a banner that Smith made. Rosemary Smith made the flags that are still in use from materials that Atchison Leather Products donated.

“I believe the vision statement is the most enduring part of the drill team,” Smith said. “It still says it all.”

Throughout the decades “Something Positive” remains a group of concerned citizens in the Atchison community who aspire to provide educational outlets to satisfy local talents. The group is non-discriminate and accepting of all regardless of age, race, political beliefs and religion.

The Top Dog secretary, Sandra Dowdy arranged through Atchison High School and Atchison Middle School music departments an ability to borrow drums. The Top Dogs did so for about four months until they raised enough funds from the community to purchase their own in October 1994.

Some of the original gold-tone drums remain in current use, Smith said as she credited Downing for maintaining the instruments. The tom toms from the original trio and quad drums continue to provide a beat from Downing’s handiwork.

“David is very compassionate,” Smith said when it comes to his care of the instruments and the Top Dog drummers and steppers.

During the Juneteenth festivities, Smith was overcome with emotion as she was surprised to have honors bestowed on her.

Lonnie Dudley, master of ceremonies for the event, read from an engraved plaque: “Janet Smith is honored as an inspiration to the youth in Atchison.”

One of the Juneteenth event highlights was when Top Dog alumni and current group members joined forces to perform a routine.

Mary Meyers can be reached at