Sign Up
Log In
Purchase a Subscription
You are the owner of this article.
Edit Article Add New Article
e-Edition
News
Sports
Obituaries
Schools
Voices
Community and Lifestyles
Special Sections
Multimedia
Classifieds
1 of 2 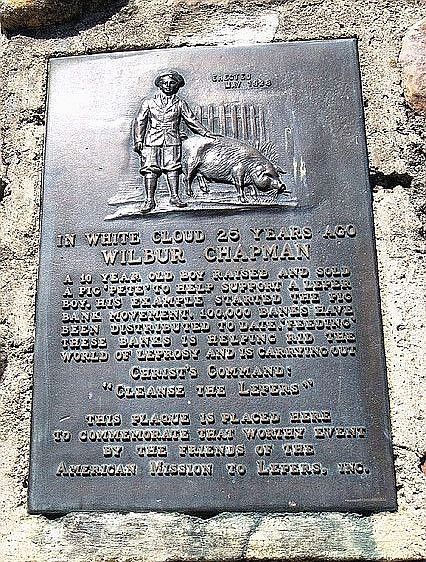 The bronze memorial to Wilbur Chapman and his disease-fighting pig, Pete, is set in stone at a White Cloud church. 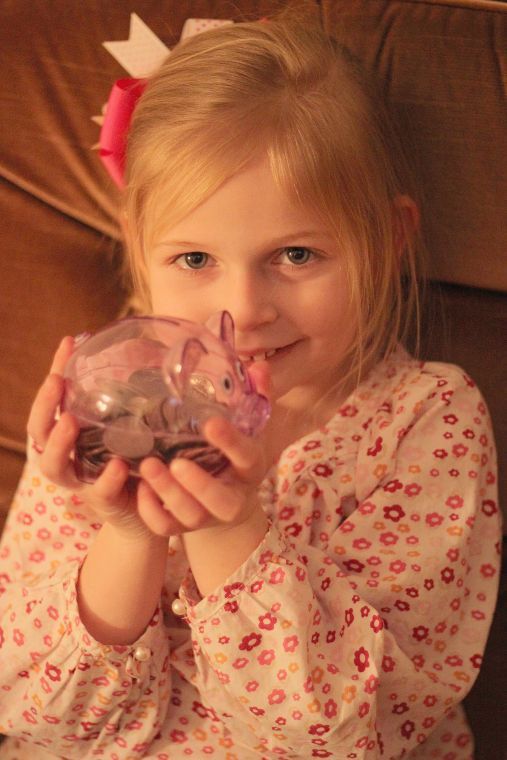 Haley Scott and the piggy bank she received for Christmas this year. Haley, 5, daughter of Pamela and Corey Scott, of Everest, will be asked to name the little pig Pete II.

The bronze memorial to Wilbur Chapman and his disease-fighting pig, Pete, is set in stone at a White Cloud church.

Haley Scott and the piggy bank she received for Christmas this year. Haley, 5, daughter of Pamela and Corey Scott, of Everest, will be asked to name the little pig Pete II.

Piggy banks aren’t as popular as they once were, but they still have fans in White Cloud — and at least one in Everest. Haley, the 5-year-old daughter of Pamela and Corey Scott, got a purple piggy bank for Christmas this year.

However, she doesn’t realize that the little savings swine was born in Doniphan County.

People in White Cloud know who invented the American piggy bank, chubby little porkers which were often gifts to children to encourage them to save their pennies.

Young Wilbur Chapman is immortalized in his home town on the banks of the Missouri River. A bronze plaque featuring the likenesses of Wilbur and his charitable pig can be found on the grounds of the White Cloud Community Christian Church on Main Street. It was dedicated in 1938 in honor of the boy and the pig who made history in the early years of the 19th Century.

The incredible tale goes back to spring, 1913, when a man came to White Cloud seeking aid for victims of a dreaded disease.

William Danner, the first secretary of the American Leprosy Missions, described to residents of White Cloud the suffering, terrible disfigurement and forced isolation of lepers worldwide, including those in the United States.

Danner was invited to dinner at the Chapman home, where he continued to tell of the need to care for the lepers.

His stories were taken to heart by 10-year-old Wilbur Chapman and his mother, who were told that $25 would provide care and a clean hospital bed for one leper for a year. Mrs. Chapman pledged she would raise the necessary $250 to care for 10 lepers for a year.

Hoping to raise $250 before Danner left White Cloud the following day, Mrs. Chapman and Wilbur immediately began calling on their friends and neighbors, asking for their help.

When Danner boarded the afternoon train, the boy and his mother could give him only enough money to care for nine sufferers. But it seemed remarkable that they had collected $225 in such a short time, and Danner was touched that someone as young as Wilbur made such an effort for others. He gave Wilbur three silver dollars to spend as the boy pleased.

Wilbur didn’t think of himself, only of those who were suffering. He wanted a year of care for that 10th leper, and he had a plan. He bought a pig with the $3.

Wilbur named the pig Pete, but Pete was never a pet. The boy cared for his “investment,” and after fattening Pete, sold him at market for $25 and sent the money to Danner.

That was the beginning of an historic story for the little Kansas town, a story that tells of Wilbur’s dedication, which allowed a boy named Al Sam to get care in a leper mission hospital.

People of the American Leprosy Missions were so inspired by Wilbur’s actions, that they started a drive to construct and sell cast-iron “piggy banks” to aid the thousands of leprosy sufferers worldwide. The little metal pigs, with slots in their backs, were welcomed into homes and businesses across the U.S., and the missionaries funneled the profits to leper colonies.

In honor of the 25th anniversary of Wilbur’s compassion, the plaque was commissioned and dedicated in a ceremony in front of the White Cloud Community Christian Church in 1938.

Chief Mahaska — or White Cloud — of the Iowa Reservation, adjacent to the town, unveiled the plaque. Wilbur Chapman (a successful draftsman) came from his home in Minneapolis, Minnesota, to attend the ceremony.

The plaque is embedded in the stone monument that sits in the churchyard today.

In 1988, the town of White Cloud hosted another huge celebration to honor the 50th anniversary of the founding of an American coin-saving icon by Wilbur Chapman and Pete.

The medical term for leprosy is now Hansen’s Disease, and while it’s almost non-existent in the United States, it remains a terrible affliction in other parts of the world.

Go online today, and you’ll find piggy banks of all shapes, sizes and materials, ranging in price from less than $5 to more than $300.

Vintage piggies are prized by collectors; toy and discount stores still stock the banks on their shelves. There are still some kids who save their pennies in an all-American piggy bank. Many children don’t know the story of another child in Doniphan County.

The National Leprosarium, a home to quarantine lepers living in America, especially those in Louisiana, was opened in 1894 in Carville. The first seven patients of the leprosarium were from New Orleans and arrived at the leprosarium on Dec. 1, 1894. This was the first and only in-patient hospital in the U.S. for the treatment of leprosy.

Although it underwent several name changes throughout the years, the treatment center was generally referred to as, “Carville” because of its location. The goal of this treatment center was to provide a place for lepers to be isolated and treated humanely, which was usually not the case in other countries where the disease was rampant and feared.

By 1896, there were 31 patients at the leprosarium. Four Catholic nuns from the Daughters of Charity of St. Vincent de Paul came to care for these patients.

In 1921, the U.S. Public Health Service took over the facility and put more money toward leprosy research and funding. By the late 1920s, Louisiana’s incidence rate of leprosy reached an all-time high of 12 per 100,000, but the most residents Carville ever had was 400.

By the early 1990s, the leprosarium was receiving $21 million in federal funds per year. However, with fewer patients in the hospital and medical advances for the treatment and cure of leprosy in the 1970s and ‘80s, the leprosarium lost funding and shut down in 1999.

As of 2001, there were 15 total Hansen’s Disease cases reported in Louisiana. Thirteen of those reported cases were endemic. These 13 endemic cases came from 13 different parishes in Louisiana. However, most of these cases were concentrated in the southern half of the state.

Carville became known as a leper colony because all lepers in the U.S. were required, by law, to be quarantined and treated.

Probably better known than Carville was the leper colony on Molokai, Hawaii, the mission of a venerable Catholic priest, Father Damian, the Leper Priest and Hero of Molokai. He was born Joseph de Veuster in Belgium on Jan. 3, 1840. He joined the Sacred Hearts order in 1860 and in 1864, he was sent to Honolulu, where he was ordained. In 1873, at the age of 33, Father Damien went to Molokai, where he cared for lepers of all ages, but was particularly concerned about the children segregated in the colony. Sufferers of the disease were isolated on Molokai by law of the Islands.

Father Damien announced he was a leper in 1885 and continued to build hospitals, clinics, churches and some 600 coffins on Molokai until his death there on April 15, 1888. He was declared venerable in 1977 and Pope John Paul II declared him beatified on June 4, 1995.

Between the late 1950s and late 1960s, quarantine laws were rescinded in all the United States, although it’s reported that patients at Carville weren’t allowed to vote until 1946.

While between 1913 and 1938 it became known that Wilbur and Pete were so closely connected to the ease of human suffering, who would have guessed in those years that the boy and his pig would even be connected with sainthood?