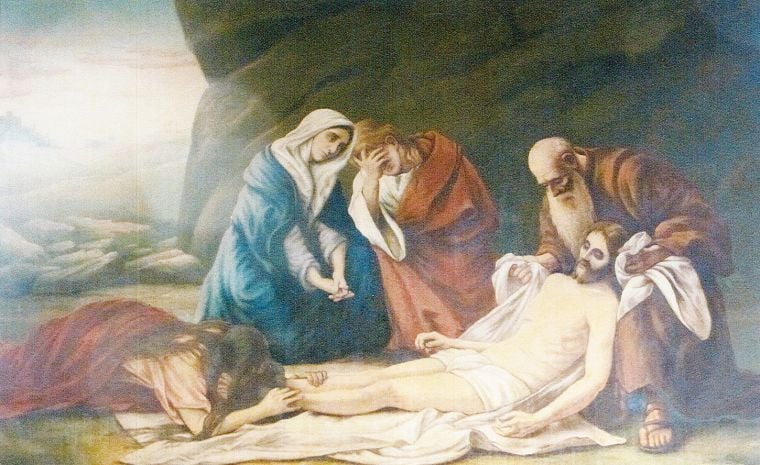 One of the murals that embellishes the historic Catholic church at Doniphan. 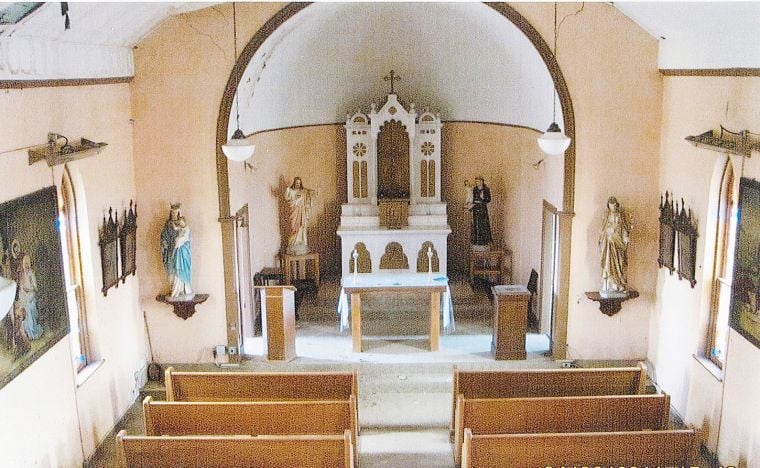 The interior of Doniphan’s St. John the Baptist Catholic Church, which is in desperate need of repairs from a crumbling ceiling and exterior walls.

One of the murals that embellishes the historic Catholic church at Doniphan.

The interior of Doniphan’s St. John the Baptist Catholic Church, which is in desperate need of repairs from a crumbling ceiling and exterior walls.

Area residents are working quickly to preserve a building rife with history before it’s lost.

St. John the Baptist Catholic Church in Doniphan is in danger of collapse, prompting two women with familial ties to the church to lead its revival. Mary Perkins and Kitty Nourie, members of the Friends of St. John’s Oratory, are currently fundraising for the preservation of the historic building, which was built in the early days of Doniphan’s settlement.

“The church/Oratory was built with their sacrifices, their hopes and their faith,” said Nourie, the great-niece of Bridget Murray Flannigan, one of the first parishioners of the church. “To allow it to degenerate into rubble would make all that they (early settlers) gave and endured meaningless.”

More than 150 years ago, a 10-year-old Bridget crossed the Atlantic from Ireland with her family to join the Catholic presence already in Doniphan. The Murrays disembarked at the town site in Kansas Territory after they saw a chapel bell tower atop the Missouri River bluff, Bridget recounted at the age of 92.

The chapel was constructed by Rev. Henry Lemke OSB, the first Benedictine who arrived in Kansas, with $650 from the Most Reverend Bishop Meige and another $700 from non-Catholics in Doniphan. During her youth, Bridget received religious instruction from Fr. Henry, who she remembered as a tall, slim man always wearing a three-cornered hat.

Bridget Murray’s future husband Tom Flannigan came with his family about the same time to Doniphan. As a married couple, Bridget and Tom were part of the St. John Catholic congregation with the O’Driscolls, Brannons, and Dempsey families.

Fr. Henry’s church was a staple part of the bustling settlement community until it tragically burned to the ground in 1864. Not to be discouraged, church members of the day rebuilt the church as a brick structure in 1867. The new church was built in a different part of town on a two-acre block of land donated by Adam Brenner.

It was to this new church that Bridget and Tom Flannigan donated a stained glass window, which was installed above the church’s main entrance door, Nourie said.

“They were dirt poor,” Nourie said of her relative’s generous contribution toward church construction.

About 100 years after the new church was built, newlyweds Patrick and Lillian Hegarty purchased a farmstead in Doniphan and reared their family there.

Their daughter Mary Perkins said it was at St. John’s where she and her five siblings all received their sacraments. For more than a century, the edifice also served as a center of religious and social activities in the community. Perkins said it was how her family and other church members bonded friendships with priests like the Rev. Angelus Lingenfelser, OSB.

“They rotated breakfasts after Mass,” Perkins said of the families who hosted the priests.

The Sunday lifestyle and interaction continued until the 1980s when regularly scheduled Mass services ceased at St. John’s, and its designation changed to St. John’s Oratory. The Oratory was used for special liturgies and prayer for the community and groups of faithful.

The Oratory is located in the Brenner Vineyards Historic District, southwest of the junction of Mineral Point and 95th roads. It was featured in the Dec. 26, 1955 edition of Life Magazine, “A Cloistered Life of Devotion,” photographed by Gordon Parks.

Despite its historic presence, in recent years the Oratory’s roof has deteriorated and the structure has sustained water damage. There are also other signs of deterioration to the brick exterior.

Nourie said the Oratory is among the last few structures representing the early years of the Doniphan settlement. Names represented on the windows reflect an ethnic settlement pattern about half Bavarian German and the other half Irish, all of whom were first generation Americans.

It’s because of this rich history that Nourie, Perkins, and many others, feel saving the church is a vital undertaking. Nourie said if successful, the drive to replace the roof would ensure that another fragment of historical significance and ancestral hopes will not disappear.

The new roof would also preserve the religious artifacts that embellish the interior like oil painted murals, statues and other antiquities.

Mary Meyers can be reached at