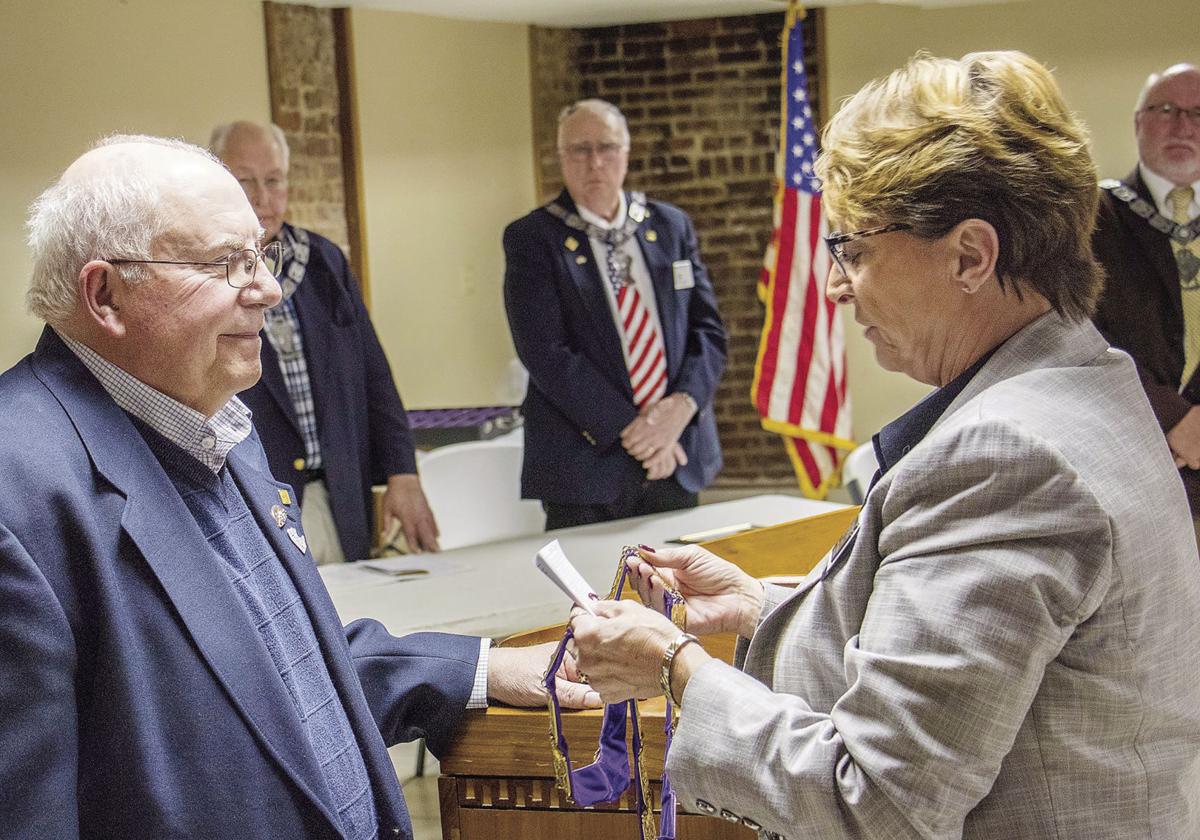 Dave Butler receives a medallion from Debbie Betts as he prepares to assume the mantle of Atchison Elks Exalted Ruler in 2018. 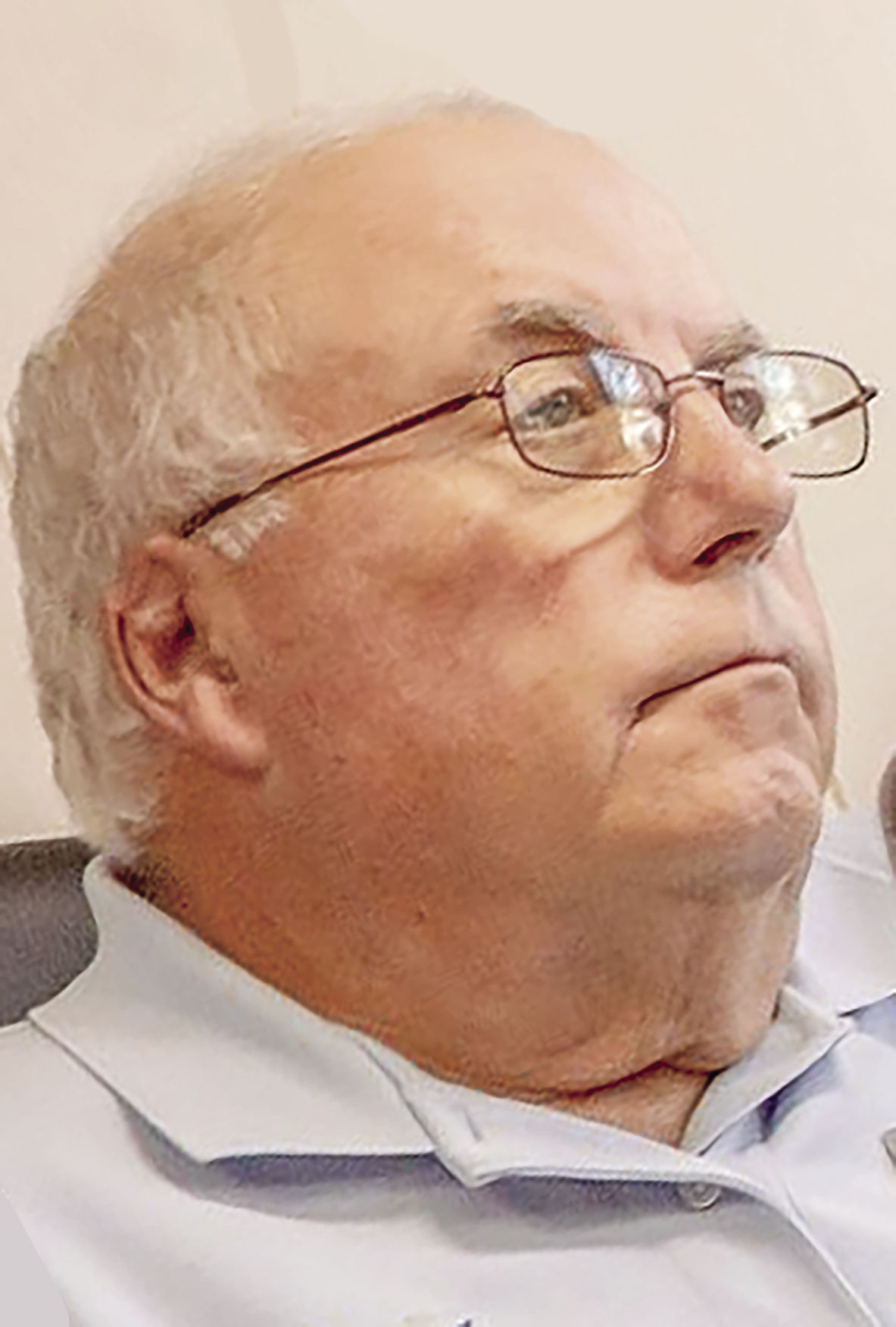 One of the most dedicated community leaders and volunteers of Atchison’s history, who passed away last week, is set for a community farewell on Friday.

David W. Butler, 70, who went by Dave, was known for regarding public service as a calling. He took up that banner whenever a need arose and stepped back from power when his work had been done.

This was most recently seen when he took a bow as a member of the City Commission in early December, determined to serve out his final term, despite extended illness. The commission recently presented Butler with a personal monument and mayoral proclamation honoring his contributions to the municipal government.

“Atchison has lost a remarkable public servant,” Mayor Shawn Rizza said. “Dave was the steady presence that you could rely on, no matter what. I personally leaned on his experience, and appreciated his quick wit. He kept the focus on serving all the people of Atchison, and did so with a principled approach. I am going to miss his kind advice and Atchison is going to miss his guiding hand.”

According to an obituary published by Atchison Globe, Butler’s family will receive friends from 5:30 p.m. to 7 p.m. on Friday at Becker-Dyer-Stanton Funeral Home, 800 Kansas Ave. Following a memorial Celebration of Life at 7 p.m., visitation will continue from 8 p.m. to 10 p.m. at the Benevolent and Protective Order of Elks Atchison Lodge No. 647, located at 609 Kansas Ave.

Butler, who logged about 16 years on the city commission, compiled more non-consecutive years of elected and appointed governing body service to the community than perhaps any other contemporary local leader. He served a total of seven years as mayor with the enthusiastic endorsement of his colleagues, taking the mantle again when the need arose and departing when his job was done. He had a well-established reputation for accepting an invitation to serve whenever the city required it: Have a commission vacancy? Call Dave.

“Everyone has heard what a quality guy he was,” said Dan Senecal, who has known Butler all his life. “He was a true gentleman in the truest sense of the word. If you ran into Dave Butler, he would brighten your day, because he was always going to be there to help. No matter what he was doing during the day, whether he was at the pharmacy or in a city capacity or in a volunteer capacity, he was one of those guys that just truly served his community.”

Vice Mayor Allen Reavis, who has been a Butler colleague for several years, and goes back “quite a ways” with Butler on a personal level, said Butler set an example for all coming time as to how a city commissioner should carefully weigh the pros and cons of each decision. Butler never voted a certain way just because his colleagues wanted him to, Reavis said, and always kept an open mind.

“Even if he reached a decision you didn’t agree with, you always felt like you got a fair shake,” Reavis said. “Dave always tried to find what would be good in the end, the best for the whole community. I really learned a lot from him.”

Naturally, Butler contributed his time, strength and keen community-oriented mind in a variety of other ways: as two-time exalted ruler of the Atchison Elks; as the pharmacist of the Butler RX business and the first full-time pharmacist for Atchison Hospital; as one of the most well-known ambassadors for this fine Missouri Riverbend community to the greater world; and most of all, as a friend to each and every contributor to the greater Atchison neighborhood.

Senecal, a longtime leader among the Elks, reflected on how Butler served as exalted ruler twice, roughly 30 years apart.

“For him to stand up when the lodge was in need, that just shows you what kind of guy he is,” he said. “Exalted ruler is usually a one time thing, and it’s a lot of work. But Dave was there. He worked throughout his life on behalf of all of us and he had compassion for whatever he was involved in.”

Memorial contributions may be directed to the Elks National Foundation or the Atchison Boys & Girls Club, and may be sent in care of the funeral home. To leave condolences, go to www.beckerdyer.com.

“He always wanted to be involved in the community,” Reavis said. “I think he realized that he could be a good role model for everyone. You know? Community service and giving of yourself to help everyone else, it has a great payback. There’s no money, but it makes you feel good ... Dave was always there to help.”