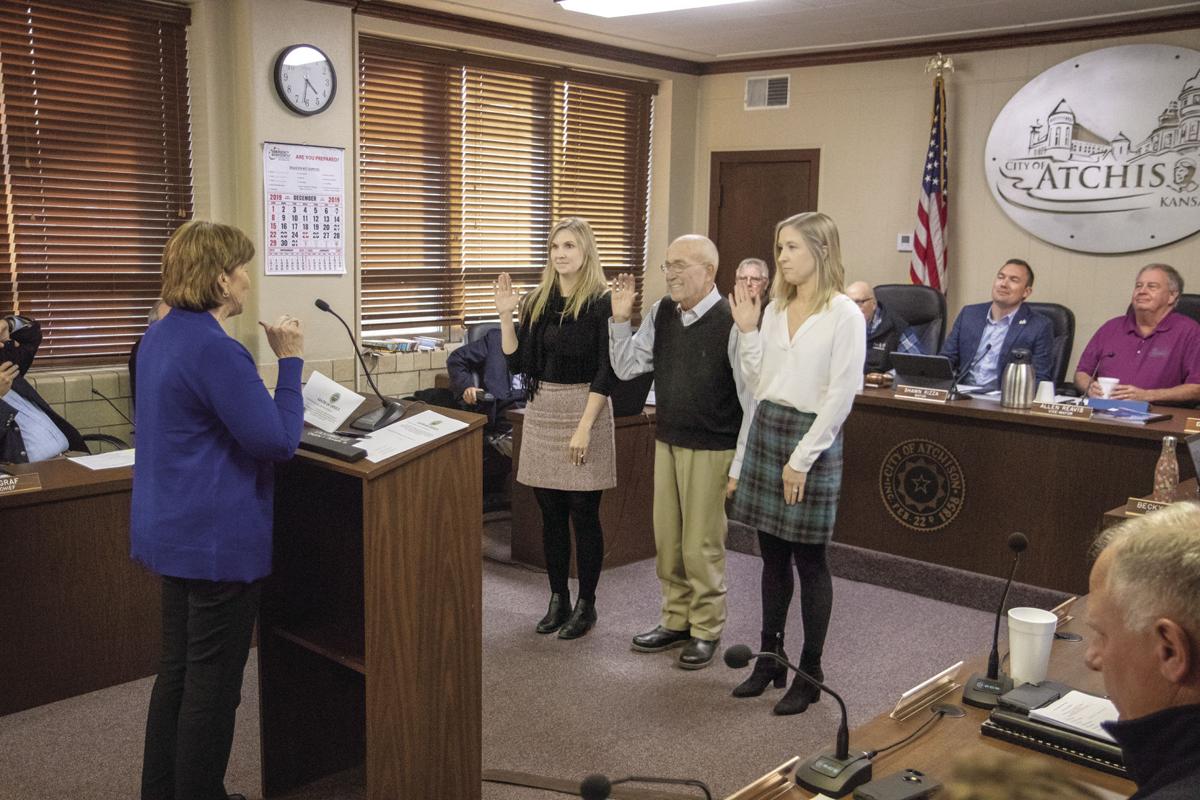 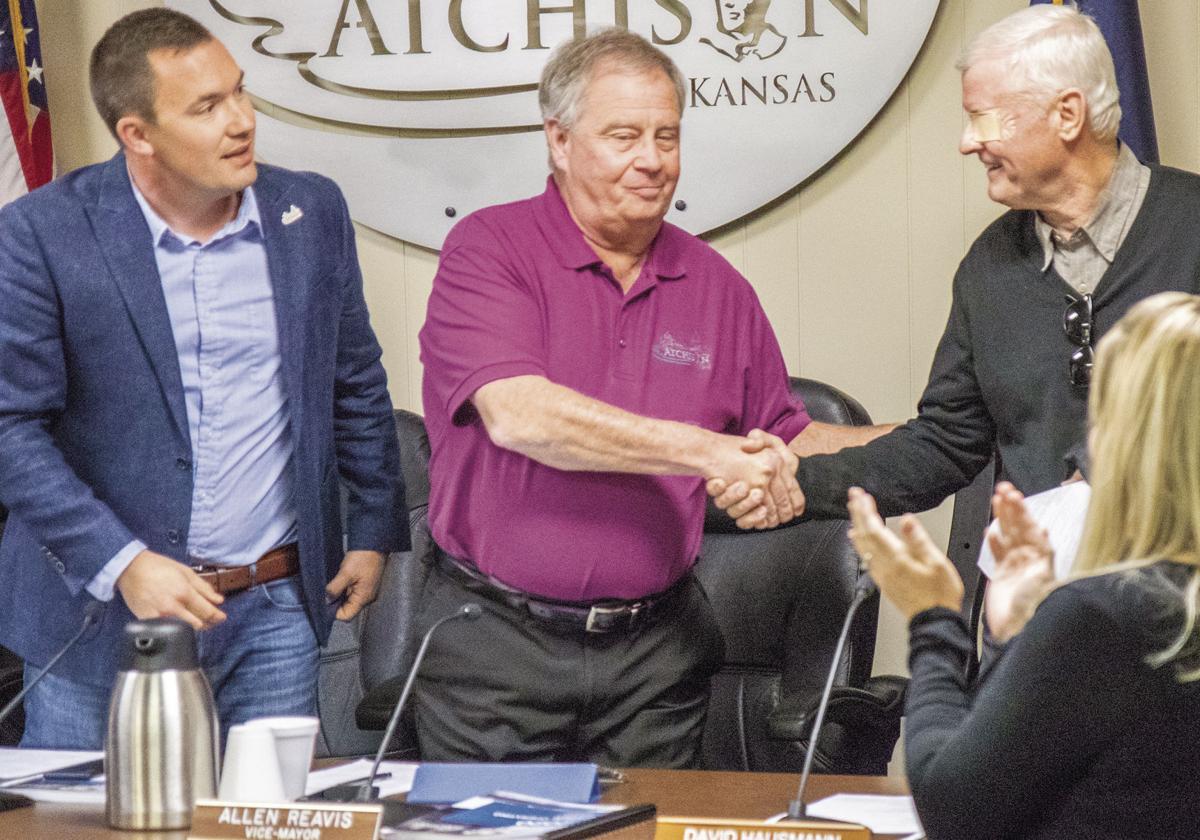 Three City of Atchison City Commission seats passed to new occupants, but the gavel remained in the same hand on Monday at City Hall.

Abby Bartlett, J. David Farris and Lisa Moody took the oath of office administered by City Clerk Deb Clem, before the newly impaneled commission elected its officers for the coming year. Shawn Rizza, on an uncontested nomination by Allen Reavis, received a 5-0 vote to continue serving as mayor. Bartlett then presented an uncontested nomination for Reavis to continue serving as vice mayor.

Leaving the commission are Dave Butler, who didn’t seek re-election, as well as Charlie Perdue, who placed fourth, and Dave Hausmann, who placed fifth. Farris, who placed second in the Nov. 5 election and thus is entitled to serve a four-year term of office, has decades of non-elected city service under his belt prior to this occasion, primarily as the previous city attorney.

“This is my 601st (meeting) and I’ve enjoyed it,” he said, stirring laughs among his colleagues.

The mayoralty is a mostly ceremonial position held by a city commissioner for a one-year term, and Rizza’s vote will carry no greater or lesser weight than that of his four colleagues, though he will continue to chair all City Commission meetings through at least early December 2020, with Reavis serving in his stead in case of absence.

“I just want to say ‘thank you,’ to everybody that got out and voted,” said Bartlett, who placed first in the election and is entitled to serve a four-year term. “It’s exciting to be up here. I’m really looking forward to the future. Thank you.”

Moody, who placed third in the election and will thus serve for two years pending another electoral effort, likewise offered her thanks to her constituents for their support, as well as to her colleagues.

“I’m honored to be here and am looking forward to working with each one of you,” she said. “So thank you.”

The new commission got right to business, voting through more than sizable transportation allocations via contracts with Herzog Construction Corp. First, commissioners approved two agreements, together worth $810,933.54, to complete asphalt work on the city’s 2020 Street Improvement Project, worth a total of more than $1.2 million based on previously approved work to be performed by Bottorff Construction Co. Joe Warren, city director of administrative services, explained that the project will be funded primarily via previously enacted bond proceeds, and is part of a plan the city implements every three years for street upkeep.

Second, commissioners approved a $271,791.78, also with Herzog, to resurface sections of Kansas Highway 7. Though Highway 7 is a state route, primarily maintained by the Kansas Department of Transportation, the municipal government is responsible for a certain degree of its maintenance needs within city limits. Commissioners concurred with city staff assessments that keeping up with the wear and tear on the highway generated largely by pass-through traffic is something of a Sisyphean task. City agenda documents indicate Herzog supplied the low bid on both projects.

Commissioners heard from Molly Saunders, project manager of Shockey Consulting, a Lenexa firm retained by the previous City Commission to conduct Atchison’s strategic plan for the rapidly approaching new decade. Saunders explained that such plans rely on engaging as much public input as possible and typically span four to five years. City government workshops will be conducted in January to begin work on constructing the strategic plan.

The cost of restricting a single block of a public street for a public event is now $50 per diem, including the cost of eight or fewer barricades

The cost of reserving a city-owned parking lot for a non-profit event is now $75; for-profit events will be able to reserve space at a cost of $5 per parking space required for the event

Other events, such as large flea markets and carnivals, shall be determined by a fee schedule set by a City Commission resolution.

Commissioners heard a presentation on the future of a what has been a temporary four-way stop at Second and Commercial in downtown, and approved by a 5-0 vote the permanent installation of such traffic regulation at that location.

Chief of Police Mike Wilson told commissioners that a key consideration in regulating that intersection is the flow of pedestrians, which has significantly increased in recent years. Officers stationed in that area have taken notice of the pace of foot and vehicle traffic, he said.

“And by the way, based on the last 90 days, there have been no accidents at that intersection,” he said. “Which is to say, people are abiding that (stop sign), there’s no one running that like, ‘Oops, I forgot I’ve got to stop on Second Street.’ They are (abiding), because we’ve had zero accidents.”