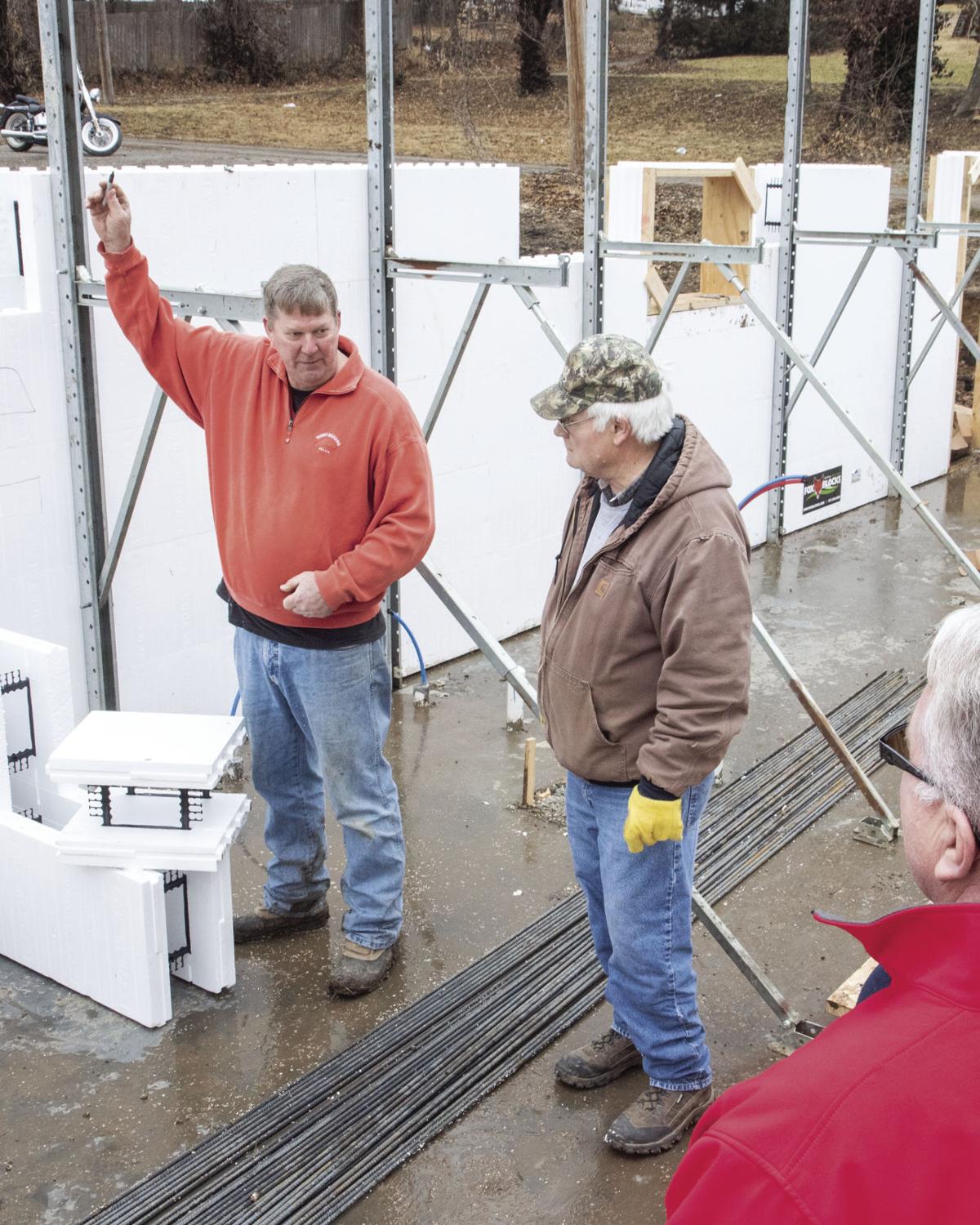 Scott Applegate, Fox Blocks sales manager, gives instructions to Charlie Perdue and other volunteers on the modular construction of the Habitat house. 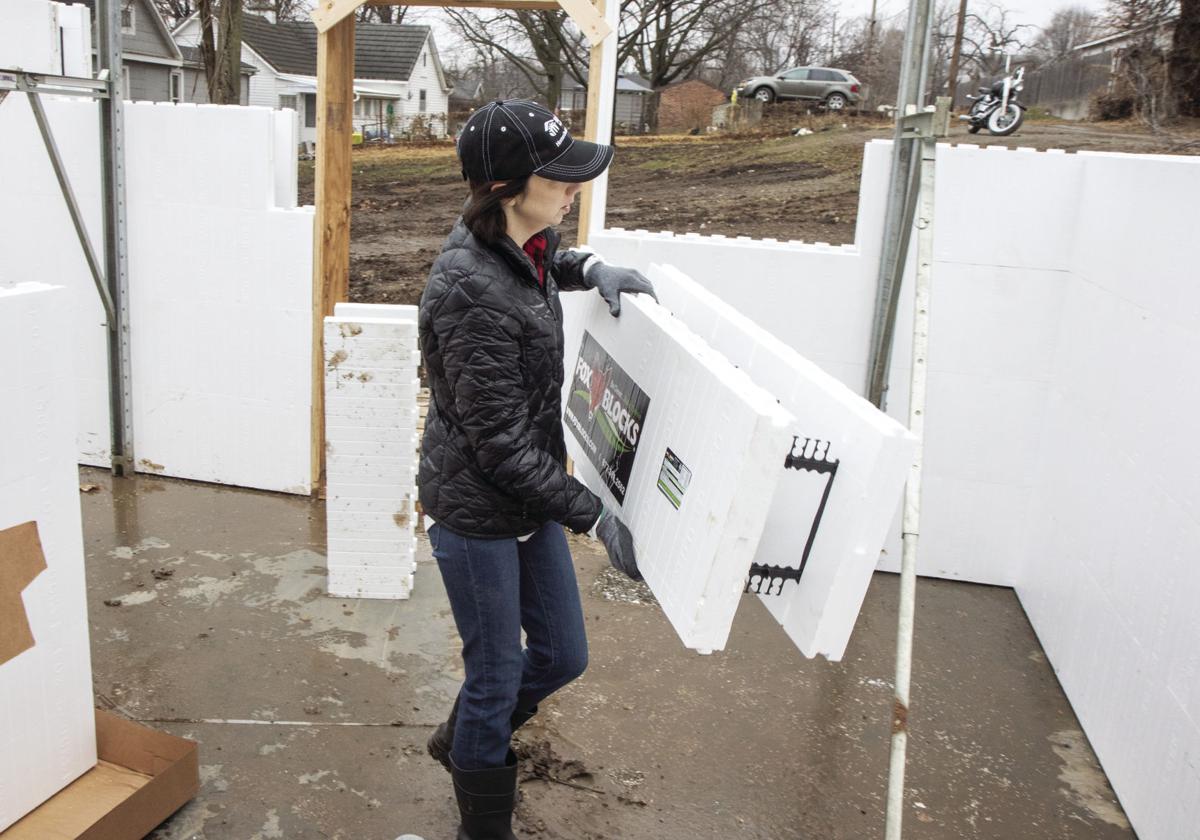 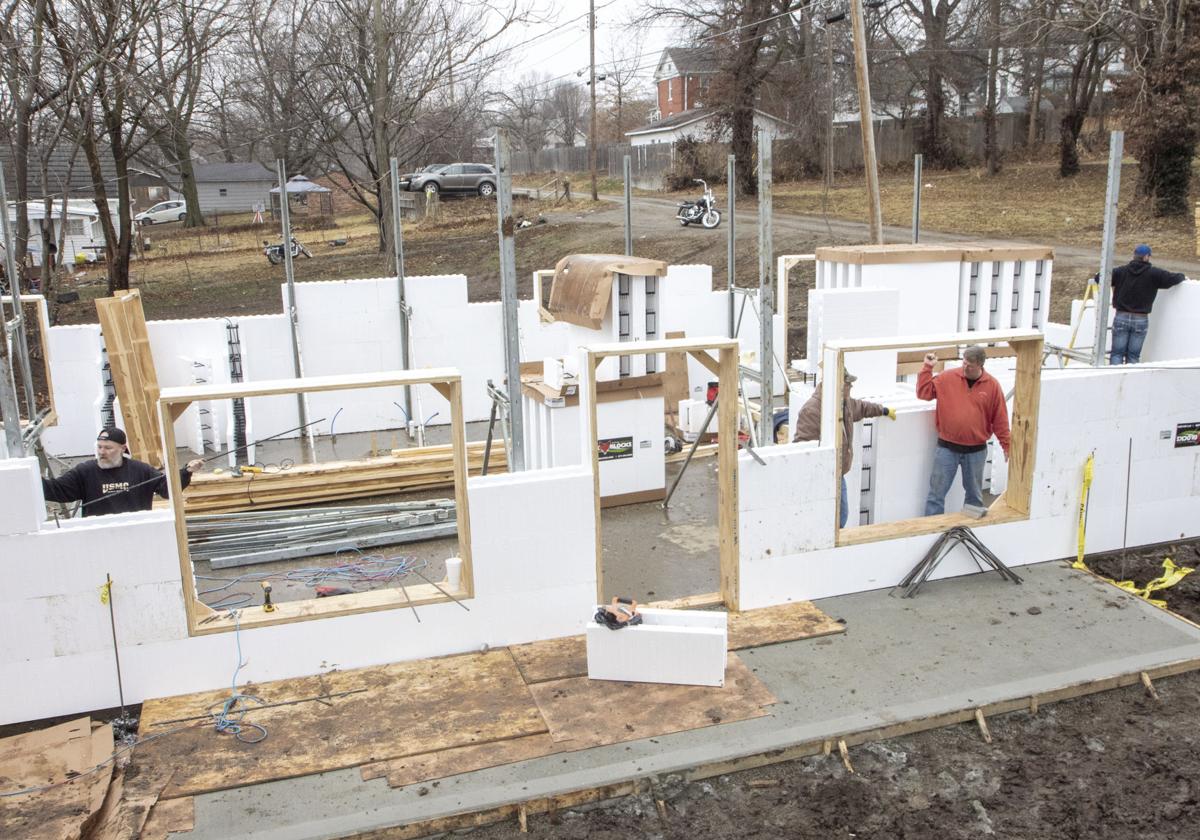 The Riverbend Habitat for Humanity house is under construction for the Hysten family using modular styrofoam block concrete forms.

Scott Applegate, Fox Blocks sales manager, gives instructions to Charlie Perdue and other volunteers on the modular construction of the Habitat house.

The Riverbend Habitat for Humanity house is under construction for the Hysten family using modular styrofoam block concrete forms.

A new home is always a big boon for any family, but the construction of a home from scratch by volunteers with Riverbend Habitat for Humanity conveys a number of particular benefits ensuring each member of a family in need has a roof over their head.

These benefits can be seen with the ongoing home construction project being done on behalf of the Hysten family at Oak and Division. The home is being built with a modern modular construction method using Styrofoam forms. Following assembly of the form walls in a manner highly similar to the arrangement of LEGO blocks, concrete is poured in.

Habitat beneficiary and designated homeowner Tiffany Hysten said the process of working on the house as part of the Habitat principle of “sweat equity” is producing physical and mental health benefits for herself and her family, as she is learning much in the process and anticipates the sense of community support and security she will enjoy.

“This is something that I have always dreamed of, and this is giving me an opportunity of a lifetime,” Hysten said. “The new house will give my children and I a reasonable, decent, steady, environment where we can feel safe. I am learning new skills every day on the site that will be helpful, and I will be able to use these skills in the future.”

Abbie Perdue, community resource development director for the Riverbend Habitat for Humanity, said she believes the concept of sweat equity as provided by the whole community offers “tremendous” benefits for all.

“The projects themselves don’t require a lot of construction knowledge or physical strength,” she said. “They are community building in the sense that they get people out here to do their part so that they can get introduced to other people in the community, people they may not know. What better way to bond with your neighbors than to build another neighbor’s house?”

Volunteer Logan Kramer, who is 18 years old, said he appreciates that kind of sentiment and also believes causes like Habitat are a good way to get young people like himself more invested in the future of their community.

“It’s really inspiring to have volunteers just go out and you know, just build a house for someone,” Kramer said. “You could go back for years to come and be like, ‘I helped be a part of that.’”

Hysten said her family, including 14-year-old son Talen, 8-year-old daughter Kaelor and 5-year-old son Jayzeon, owe an everlasting debt of gratitude to the Riverbend Habitat for Humanity and to people of Atchison that she never anticipates can be repaid, but she’ll spend years to come furthering the cause to try.

“I have a feeling we will be involved with this program forever,” she said. “I wouldn’t be able to have this opportunity if it wasn’t for Habitat and everyone who donated and volunteered. I really am thankful for this adventure. I want to let everyone know, thank you very much.”

Marcus Clem can be reached via