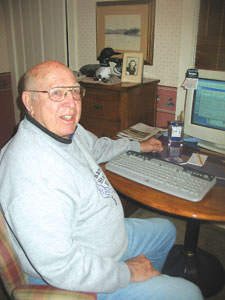 Delbert ‘Dub’ Ehret displays the data base he had compiled from detailed records he kept from the Y’s northern fishing trips, dating back to 1959. 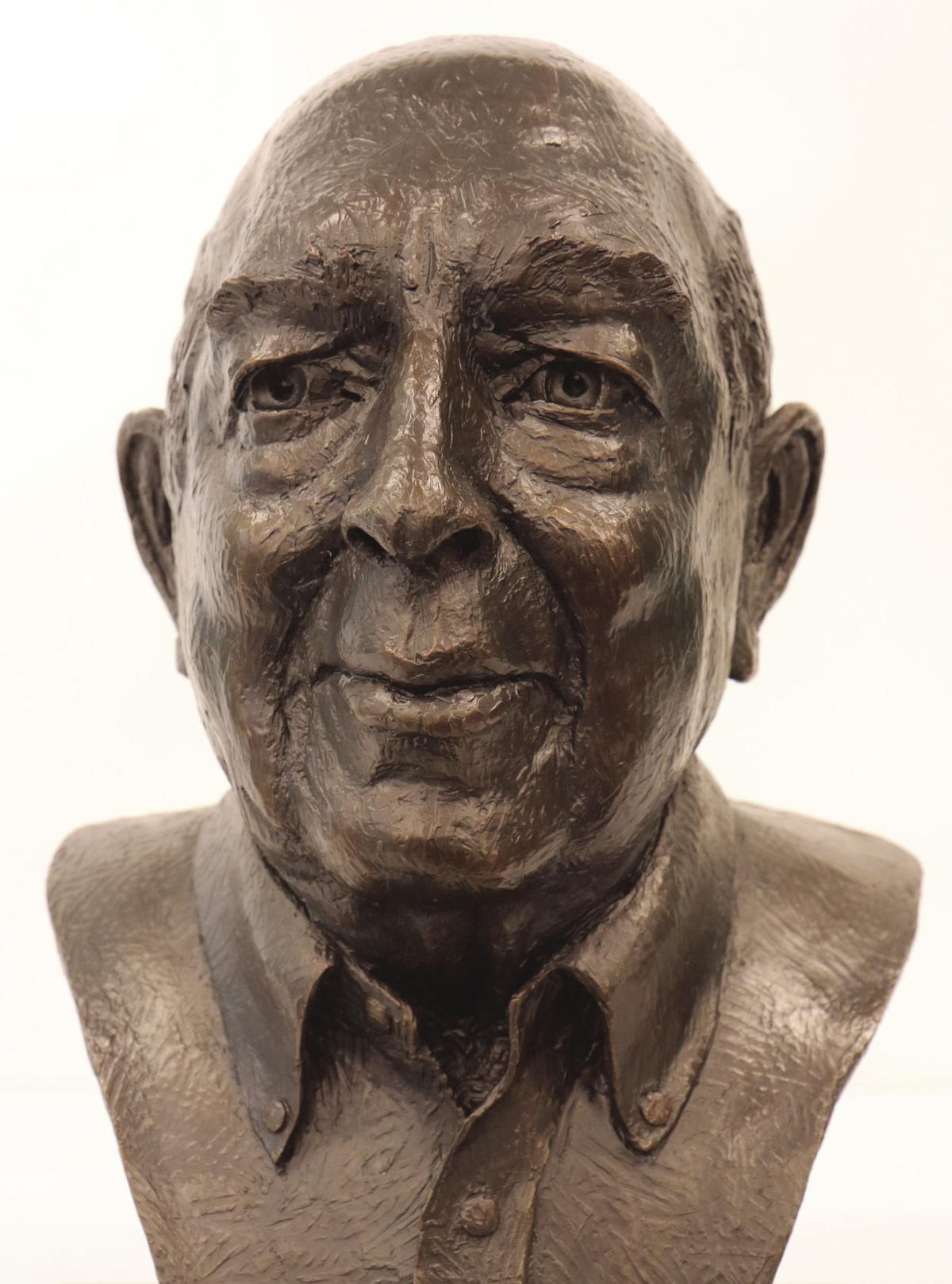 Delbert G. ‘Dub’ Ehret as he appears in a bronze cast of his image to commemorate his leadership at the Atchison Family YMCA.

Delbert ‘Dub’ Ehret displays the data base he had compiled from detailed records he kept from the Y’s northern fishing trips, dating back to 1959.

Delbert G. ‘Dub’ Ehret as he appears in a bronze cast of his image to commemorate his leadership at the Atchison Family YMCA.

Although an era seemingly comes to a close with the recent passing of Delbert G. “Dub” Ehret, some who knew him agree the legacy he leaves behind is monumental to his community.

Ehret, 96, died Nov. 14. He served 39 years at the YMCA, many of those years he served as the general secretary then as the executive director. Ehret’s community involvement extended beyond the Y and his family to include First Christian Church Elder Emeritus and activities, eight years of service as a USD 409 Board of Education member, and a Rotary Club member. Up until Ehert’s last days, he would meet daily with a group of friends for coffee at McDonald’s.

Jim Taylor, Roger Caudle and Bill Ewing frequently met with Ehret for their casual, daily, coffee club get-togethers. “We’re going to miss him,” Ewing said, and the others agreed.

“He (Dub) was here every morning and then he’d go to church on Sundays,” Taylor said. On some days there are 10 to 15 coffee drinkers comprising the group regulars. After Ehret started to drive less, his friends would make sure he had transportation to and from their morning coffee. Ehret was a daily regular up until about the past two weeks prior to his death.

“Dub was a great listener, a great mentor who wanted to impact the community in everything that he did,” Taylor said.

Taylor recalled he was 10 years old when he became acquainted with Ehret. “He’s been in my life more than any other individual,” Taylor said. It was Ehret, Taylor recalled, who allowed him as a boy to do some work at the Y in effort for the youngster to earn a ticket that allowed him to be able to participate in the activities. Taylor recalled the ticket was good for a specified amount of membership time, worth about $2.50. From doing the simplest of assigned tasks, Taylor said he continued to work his way throughout the years to scorekeeper for the basketball games.

Jesse Greenly has earned his multiple academic degrees throughout the years, and in recent years facilitated the Atchison Area Chamber of Commerce-sponsored Leadership Atchison course to promote leadership skills for development in the community. Greenly said Ehret was his mentor and friend whom he greatly respected. Ehret supported and encouraged Greenly to do things that he might never have done otherwise.

It was back in the 60s when Greenly recalled he landed what he referred to as “my first real job” when Ehret hired the teenaged Greenly to work as a certified water safety instructor at the YMCA.

Greenly explained he realized Ehret’s strength as the community role model he was for all in 1965.

“A lady complained to Dub that she did not want her kids to be in the pool with me,” Greenly said. “Dub told her, ‘he is one of our (the Y’s) water instruction team members.”

Greenly added that Ehret recommended she take her children elsewhere for their water instruction, if she disagreed.

Greenly said he continued to work at the Y and taught certified life guard and swimming instruction, and later officiated for the church league basketball, and became certified to officiate for high school leagues.

“Dub made me feel I could do anything if I set my mind to do it,” Greenly said, and added I am glad and fortunate to have known him as a mentor and a close friend.

Rick Berger is the third of four generations of Berger family members that he considers to have had the privilege to work with Ehret throughout the years, Berger said.

“The Atchison Community truly lost a giant with the passing of Dub Ehret,” Berger said. “Dub touched more lives than anyone I have ever known. He was a mentor to practically every kid in Atchison who grew up in the ’50s, ’60s, ’70s and ’80s.”

Berger continued, “Under his guidance and leadership we all learned to swim, bowl, play pool and play basketball. Go to Teen Town and bean suppers. Our moms didn’t have to worry about where we were after school because they all knew that we would be at the YMCA with Dub.

“I cherish the many memories of the time I spent growing up at the Y and the many trips up North on the Canada fishing trips.”

Ewing has resided in Atchison about 40s years and that is when he became acquainted with Ehret. It was about 20 to 25 years later when Ewing participated in the Boundary Waters and Canada camping, fishing and canoeing trips.

Those trips that evolved throughout the years under Ehret’s leadership, Taylor said. The initial trips utilized motorized vehicles to transport campers and equipment from campsites along the waters between Minnesota and Canada, Ehret arranged with an outfitter to accommodate different-themed Y camping groups like father and daughter, father and son, parent and child, husband and wife as well as all-men trips, etc.

There were canoe trips and fishing trips. Later, as some of the regular campers aged, they graduated from stays in tents to cabins with no electricity and running water at fly-in fishing camps at Lake Harris, in Ontario, Canada.

Ehret and his arranged expeditions were a featured focus as a canoe country character spotlight, titled “Dub” written by Robert Fast, published in the Fall 2018 edition of “the Boundary Waters Journal.”

Executive Director Lorin Affield, Atchison Family YMCA Cray Community Center, credited Ehret, Cloud “Bud” Cray Jr. and Bob Berger for their foresight and leadership abilities that made the Y what it is today, even though all three have recently passed they all lived to see their share vision come to fruition, he said.

It was Ehret’s ability to develop programs and services that sustained throughout transitions from the Y as a residence for young men to an activity center to fulfill community needs for all ages in a way to carry out the mission of the Y. Ehret, Cray and Bob Berger were instrumental in the launch of the past two capital campaign drives to expand and renovate the Y facility to its current state.

“Dub was optimistic and always looked for the best in people,” Affield said. “He served to live out the Y’s mission in everyday life impacting friendships and work in the community influencing our lives. Dub might be gone, but his legacy lives on and carries on in the Y.”

Without Ehret we would not have the current $11 million Atchison Family YMCA and Community Room dedicated in his honor, Berger said.

“Dub was a family man with the utmost character, and a great mentor, leader and role model for all of us,” he said. “Dub will be truly missed.”

Memorial services for Ehret were Nov. 22 at the First Christian Church, the suggested memorial contributions in Ehret’s honor are: Atchison Family YMCA, First Christian Church or Mount Vernon Cemetery and may be sent to Becker-Dyer-Stanton Funeral Home, according to his published obituary.

“He was a good example for a lot of people,” Caudle said.