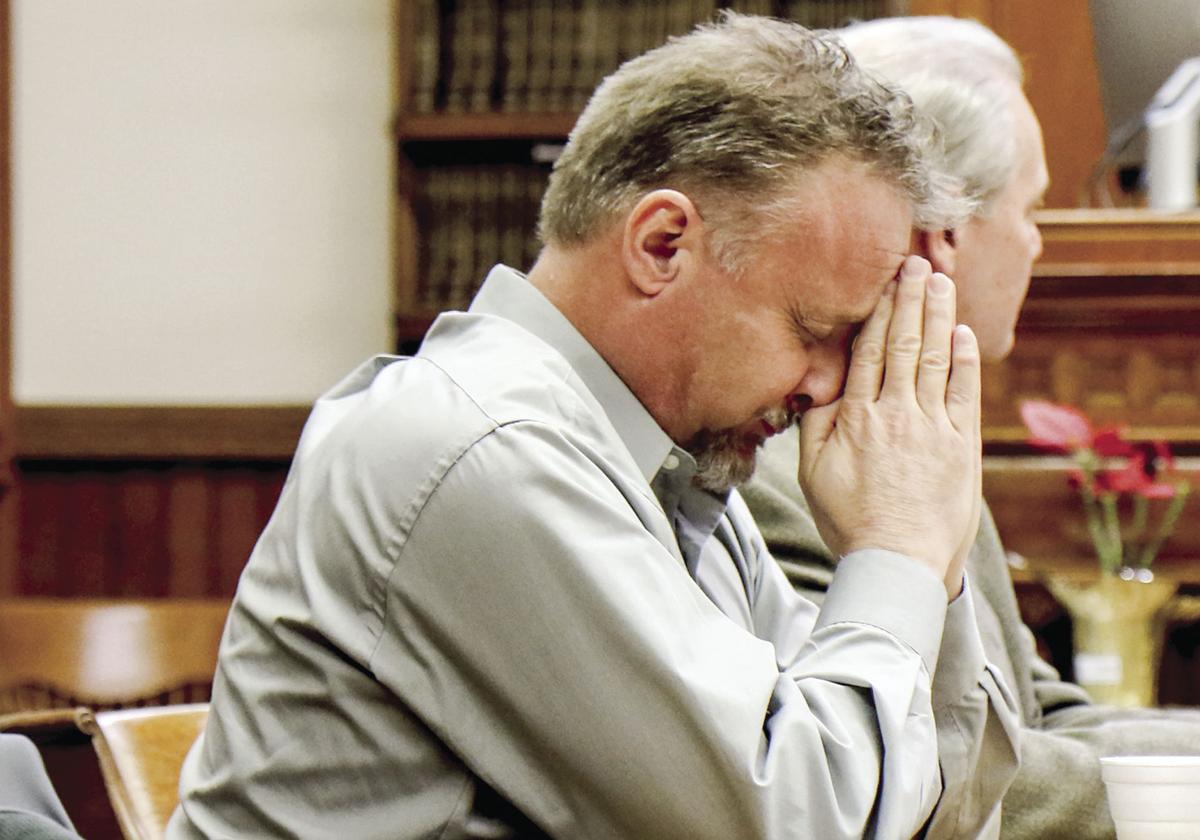 Tracy Britt reacts as the jury’s verdict of not guilty on all charges against him is announced on Thursday. 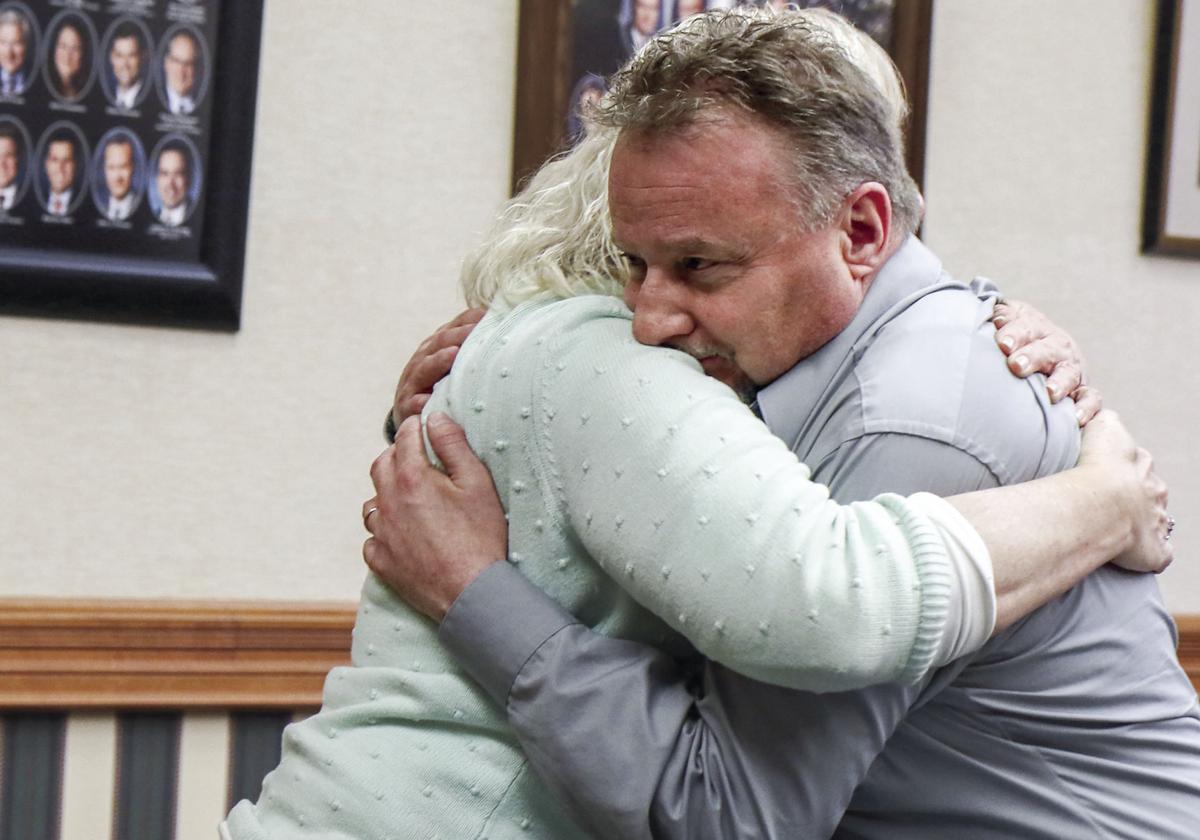 Tracy Britt, right, embraces a loved one after his acquittal Thursday in Atchison County District Court.

Tracy Britt reacts as the jury’s verdict of not guilty on all charges against him is announced on Thursday.

Tracy Britt, right, embraces a loved one after his acquittal Thursday in Atchison County District Court.

A claim of self-defense earned an Everest man acquittal on Thursday of all charges filed in the wake of a bar fight last summer.

Tracy A. Britt heard the jury’s “Not Guilty” verdict delivered following about two hours of deliberation, as a culmination of a three-day trial before the Atchison County District Court. The jury panel, composed of seven women and five men, determined Britt to be “Not Guilty” of three felony counts of aggravated assault, among other accusations. The defendant seemed to sigh with relief at the reading of the verdict, then whispered, “Thank you,” as he raised his folded hands upward, toward the jury. He embraced his defense counsel, Allen Ternent, and his loved ones, before exiting the court room.

“I am overwhelmed,” Britt said. “It has been a six-month nightmare.”

Ternent released a statement on behalf of his client on Friday.

“Mr. Britt is tremendously grateful to the jury for listening closely to the evidence in this case and acquitting him of all charges.”

The trouble for Britt began in late July 2019, according to testimony heard at trial, when he visited Fat Boy’s Bar & Grill, located near the southwest junction of U.S. Highway 59 and U.S. Highway 73. Morgan Hull had been there at around the same time, and left at about the same time as Britt. Hull testified that she came to believe Britt followed her from Fat Boy’s in a suspicious manner.

Hull testified that she told several people about this, but Ternent rejected the notion in an interview on Friday.

“Morgan Hull’s accusation is completely unsubstantiated by any evidence and the following never happened: My client had never seen Morgan Hull ever before in his whole life, and certainly never

In the overnight hours of Aug. 2 through Aug. 3, 2019, Hull and Britt found themselves in the same place at Mueller’s Lockeroom. Hull called to inform her father, Tracey Hull, who arrived to Mueller’s with friend Charles Brian Hord soon after. Morgan Hull identified Britt to them as the man she believed had followed her from Fat Boy’s in days past. Hord and Tracey Hull then approached Britt in a confrontational manner, leaving Britt cornered in an area by the Mueller’s basketball game and jukebox.

The elder Hull demanded for Britt to go outside the bar with him. Britt demanded to know the reason. Tracey Hull accused Britt of following Hull’s daughter.

Hull prodded Britt in the chest with a balled up fist. Britt’s drink ended up in Hull’s face. Hull grabbed Britt by the shirt collar and threw him onto the ground, and Britt’s head hit the hard floor. Britt, a medically retired registered nurse, testified this injury to his head left him dazed, with watery eyes, though Britt said in testimony that he had consumed a number of alcoholic beverages before the incident occurred. Mueller’s staff members, including Nicholas Downing, interrupted the fight and escorted Britt out.

Britt found himself confronted again outside the bar, but he was not defenseless. Throughout the evening, Britt had been carrying a .5 caliber snub nose compact revolver; he is a U.S. Air Force and Missouri Air National Guard veteran, who served as a combat-trained medical officer, and has maintained a concealed carry permit in the years after his separation from the military. He testified that upon seeing Tracey Hull and Hord exit the bar, walking quickly toward him with jaws clenched, he felt threatened. Britt brandished his weapon in a two-handed stance.

“I did not intend to discharge,” Britt said. “I pulled it out to stop the attack.”

The confrontation continued as Hord and Tracey Hull grappled with Britt, and Britt fell to the curb along South Second Street. Patrons exited Mueller’s to try to break up the fight; witness testimony indicates Britt suffered blows to his head as he lay against the concrete.

Throughout the struggle, the combatants wrestled for control of the gun; Britt testified that he didn’t put his finger on the trigger. However, the gun discharged.

“I thought they were going to kill me,” Britt said. “Tactically, my single huge mistake was getting too close to them, because Hord was able to grab me.”

Britt suffered a number of serious injuries from the fight, including a severe concussion; neck trauma which required a hospital stay; a swollen, lacerated eye; and nine broken ribs that are all displaced fractures, meaning they don’t line up. Treatment for Britt is ongoing because of headaches and other conditions.

Tracey Hull received a charge of misdemeanor battery as a result of the incident. According to district court records, a recent bench trial resulted in Hull being found “Not Guilty” of that offense.

If Britt had been convicted, he would have faced a possible sentence of two years in prison for each count of aggravated assault.

The jury also acquitted Britt of criminal discharge of a firearm upon a public road, and possession of a firearm while under the influence of alcohol, both misdemeanors.