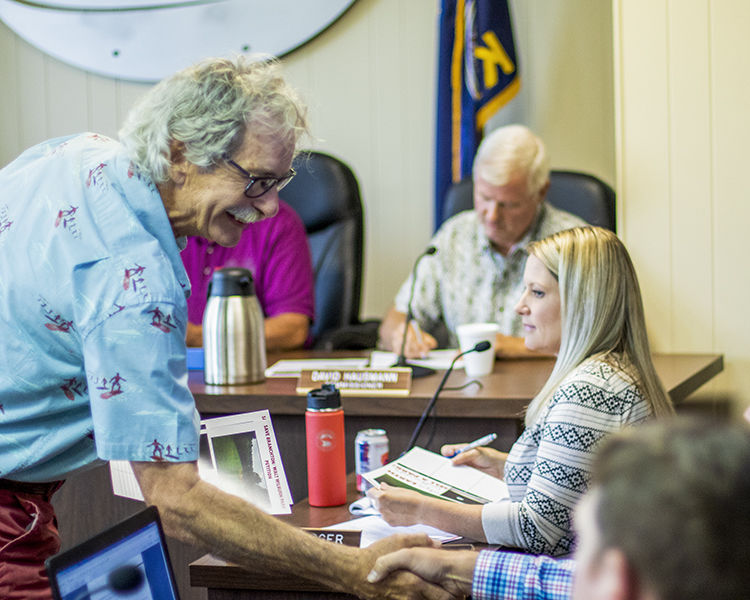 Steve Busch shakes hands with the panel of city staff leaders on Monday at City Hall during the City of Atchison commission meeting. Busch and fellow petitioner David Kesinger persuaded the commission to consider a new path forward for Walt Wilburn Memorial Park. 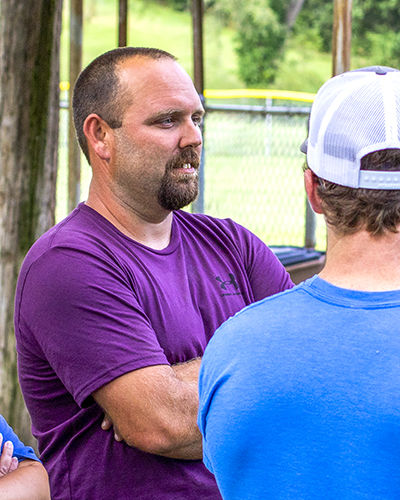 David Kesinger is confident he can get Walt Wilburn Memorial Park back to ship shape with a little help from his friends, and the city government’s cooperation.

Steve Busch shakes hands with the panel of city staff leaders on Monday at City Hall during the City of Atchison commission meeting. Busch and fellow petitioner David Kesinger persuaded the commission to consider a new path forward for Walt Wilburn Memorial Park.

David Kesinger is confident he can get Walt Wilburn Memorial Park back to ship shape with a little help from his friends, and the city government’s cooperation.

After a meeting lasting over two hours and featuring impassioned debate among city commissioners, members of the public and input from city staff leaders, the future of Walt Wilburn Memorial Park at 1100 George St. is less defined than before.

“You guys did a good job presenting your thing in a fair way, asking for a little more public input and I think that was a very good way to handle it,” Vice Mayor Allen Reavis said to David Kesinger and Steve Busch, who spoke on behalf of a group advocating for the park’s preservation.

“Unfortunately, this is what happens, a lot of times things get discussed a lot, things have been out there ... and by the time everyone realizes what’s going on, things have been down the road a ways. And it happens all the time. Personally, I’m OK with backing up and taking a fresh look at this ... “

A large amount of social media blowback has been generated over previous steps to transition Wilburn into the city’s land bank, setting up a process where the city can begin marketing it for private sale. During this time, the park isn’t closed to the public, but maintenance may be affected.

At present, per an estimate provided to the commission by Clinton McNemee, public works director, the city has 564 acres of “maintained recreational space” and dozens more acres of space it owns and must maintain under different types of classifications. This debate arose from the city’s desire to reduce “too much of a good thing.”

“Instead of having lots of space that’s mediocre at best, let’s focus our energy on fewer parks and make them excellent,” Mayor Shawn Rizza previously said on the matter. “That’s the idea that we’ve concluded ... I know this is not one of the most popular decisions I’ll ever make. Closing a park never is. But it is the correct decision.”

Repairs and upgrades — such as for the crooked outfield fence and the park’s bathrooms — which all sides of the issue have acknowledged are required but would entail extensive investment of some combination of time, effort and resources, would be in limbo until the permanent fate of the park is decided.

Speaking after Busch, Kesinger acknowledged that much remains up in the air, and that advocates for the park will need to work with local leaders to find a path forward.

“I don’t think that people fully understand what a land bank is,” Kesinger said.

He went on to interact with commissioners on defining what might come of the park’s future, with each party agreeing that no definitive moves need to be made at this time. Kesinger added that amid high public interest in this situation, resources have amassed quickly.

“Ever since we started talking about this, we actually had one man pull out his checkbook and try to write us a $2,000 check ... ‘I want to give you $2,000, what will that buy?’ I said, ‘That will fix all of the fence.’ And I know this, I’ve been doing construction for 18 years ... I think I have a pretty good idea of how numbers work on stuff.”

Kesinger said he’s optimistic about the ability for a community led effort to establish Wilburn’s future.

“I truly believe that I can raise enough volunteer help that it will be of minimal cost to the city, if any at all, to fix it,” he said. “The only problem with that is, when you go to a contractor and ask for a donation of money, or material, or their time, they don’t want to go down there and fix something if they don’t know it will be there ... Is there a way we can assure these people ... that the park will be there?”