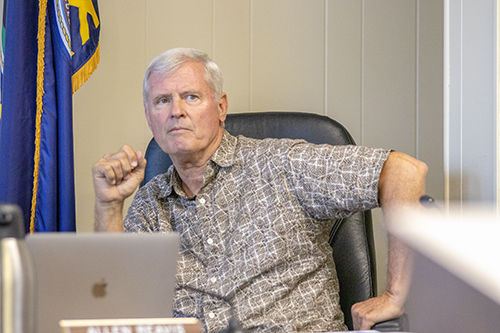 Commissioner Dave Hausmann is seeking re-election to the City of Atchison City Commission this fall. Elections are scheduled for Tuesday, Nov. 5. 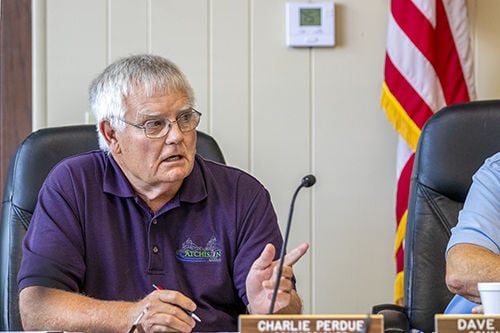 Commissioner Charlie Perdue is seeking re-election to the City of Atchison City Commission this fall. Elections are scheduled for Tuesday, Nov. 5.

Commissioner Dave Hausmann is seeking re-election to the City of Atchison City Commission this fall. Elections are scheduled for Tuesday, Nov. 5.

Commissioner Charlie Perdue is seeking re-election to the City of Atchison City Commission this fall. Elections are scheduled for Tuesday, Nov. 5.

Amid the beginning of the week and the impending 23rd Amelia Earhart Festival, the City of Atchison City Commission took steps to finalize its FY 2020 budget.

Commissioners had until July 19 to submit proposed amendments; none had been announced as of Friday afternoon. Any amendments are to be considered ahead of a scheduled adoption vote on Monday, Aug. 5, at the first commission meeting of the month. Vice Mayor Allen Reavis participated via FaceTime connection as he has been out of town, casting votes via a tablet interface for the duration of the meeting.

“I’m very pleased to keep the mills fairly close to where they were and the dollar amount pretty much the same, so I’m very happy,” Butler said.

Prior to hearing the budget proposal, commissioners made appointments to the Parks and Forestry Board and the Planning Commission:

Butler moved to re-nominate Stephanie Gardner, before his peers unanimously backed her for a renewed term. Reavis nominated Casey Quinn, and she received her first term on the board on a 4-1 vote, Perdue dissenting.

Perdue nominated Jessica Rush, and Rush received her first term on the board on a 3-2 vote, Rizza and Reavis dissenting. An additional nomination didn’t get a vote as the three available slots had been filled. Lorin Affield and Denise Surritt are vacating their positions on the board.

Butler nominated Derek Franklin to serve a renewed term as chairman of the Planning Commission, and received the unanimous support of his peers for the confirmation of this move.

In other other matters:

Commissioners then moved to combine the city’s advisory boards for plumbers and electricians into a single entity, the Building Code Review Board. After an amendment process, the action passed unanimously.

Commissioners then moved to pass a street surfacing policy, following input via a public survey, that concerns the usage of materials on street resurfacing. Repairs to current brick streets will be done with new bricks, although city leaders concurred with one another in the affirmation that total replacement of brick streets with new material is a cost prohibitive proposition.

Commissioners then moved to repeal Ordinance No. 6370, a housekeeping measure amid the legacy of a lawsuit the city ultimately settled last year concerning habitual violators of nuisance codes. The habitual violator provision has not been in use for some time. The vote carried unanimously.

According to a news release, the city of Atchison is seeking property rehabilitation experts as part of what it calls the REDO Atchison initiative.

Joe Warren, director of administrative services, said the city plans for a database of experts who are focused on renovating and restoring run-down properties in city limits, so as to address a housing shortage in the community and prop up declining property values.

The program will use a test case property, a house at 401 North Ninth St., purchased via this year’s Atchison County Tax Sale and currently part of the city’s land bank. The city will work with any contractors or experienced home remodelers to get the house back into shape at the expense of the remodeler. In exchange, the person performing successful work on a timeline will be awarded the deed to the property. For more information, call 913-367-5500.

As a reminder, the city is gearing up for fall elections. Not enough candidates filed for election onto the city commission to trigger a primary, so a general election will take place on Tuesday, Nov. 5. Two four-year terms and one two-year term is available, based on the top three performers in the at-large election. The candidates are:

Potential voters who will be 18 years old on before the general Election Day, Tuesday, Nov. 5, may register on or before Tuesday, Oct. 15, to vote in the Atchison County Clerk’s Office at the courthouse. For information, contact the clerk’s office at 913-804-6030.

Marcus Clem can be reached via marcus.clem@atchisonglobenow.com or @AdAstraGorilla on Twitter.