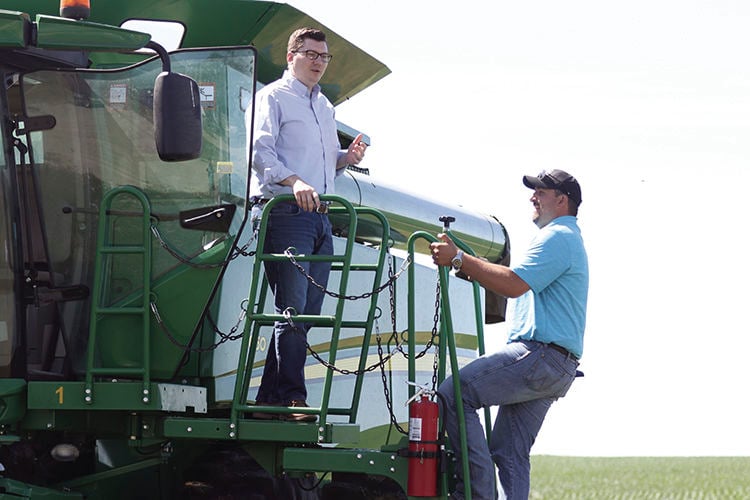 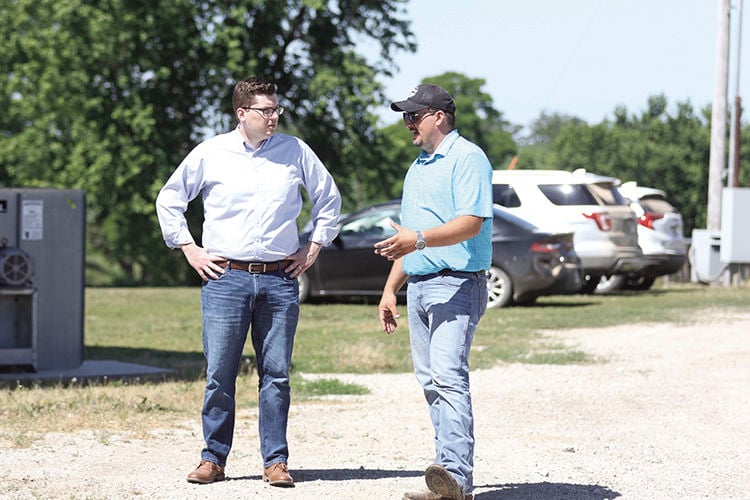 HIGHLAND, Kan. — Brett Niebling’s farm speaks to the new ways of agriculture and the old.

He can walk from a touch-screen system that controls all aspects of grain stored on site to a decades-old barn, just a couple of dozen yards away, where old-tech ways prevailed.

“Technology is growing. We’ve got to keep up with it or we can’t be competitive,” Niebling told Kansas Treasurer Jake LaTurner on a tour of the farm on Wednesday.

But for all the investment and willingness to bring advanced systems to the acreage in Doniphan County, the farmer said a hurdle stands in the way of achieving this potential: access to broadband.

He runs the touch-screen off a cellphone’s hot spot, which he considers more reliable than the satellite internet he gets in his nearby home.

“We can’t do what we want to do because we just don’t have the power,” Niebling explained to his guest. “We have all this information we’re collecting, how many bushels we’re putting in, where it’s coming from, what we’re taking out ... and we’re having to do a lot of manual data entry.”

LaTurner, a Republican running for the Kansas 2nd District U.S. House seat, said he would become a faithful advocate for expanding rural broadband if he goes to Washington.

“Rural broadband is key to making sure that Kansas is on a level playing field with not just other places in the country but across the globe,” the candidate said. “It’s part of an infrastructure package that I hope gets passed by Congress very soon. It’s something that I’ll support.”

LaTurner came to Northeast Kansas as part of a district farm tour. The Kansas Farm Bureau has endorsed his candidacy.

He is seeking the 2nd District seat held by fellow Republican Steve Watkins, now serving his first term in Congress. The Kansas primary is Aug. 4.

Included in LaTurner’s priorities for the office is a pledge to ensure Kansas always has representation on the House Agriculture Committee.

“It’s always great to see an operation up close and personal and hear the personal stories of what folks are dealing with and what hurdles the federal government creates sometimes by policies,” he said.

As a lawmaker, LaTurner said, he would work to ensure the federal government exhibits “humility” in doing right by agricultural producers.

“They lack that sometimes. We need to make sure they have the humility to understand where the rubber meets the road out here on the farms of Kansas and across the country,” the candidate said. “Too much regulation is not a good thing.”

LaTurner made an earlier stop in Hiawatha on Wednesday.