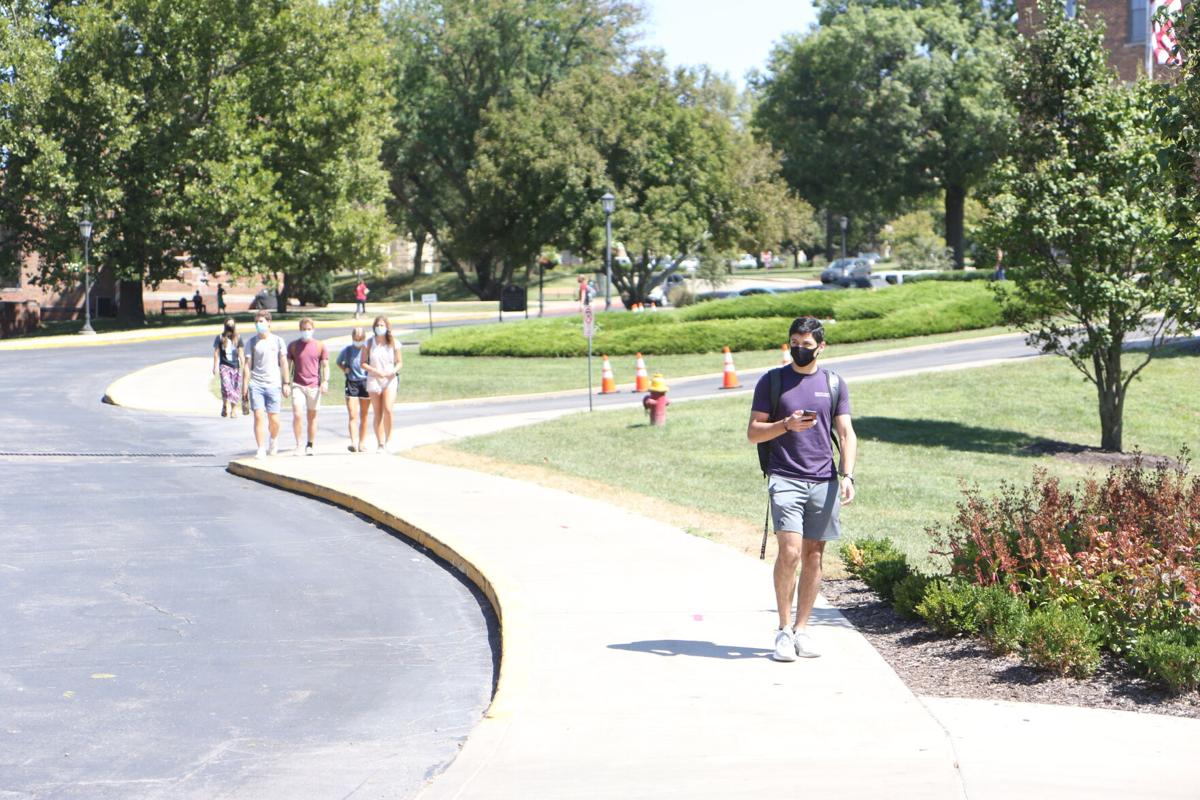 Benedictine College students wear masks as they walk on campus at this private liberal arts college in Atchison. 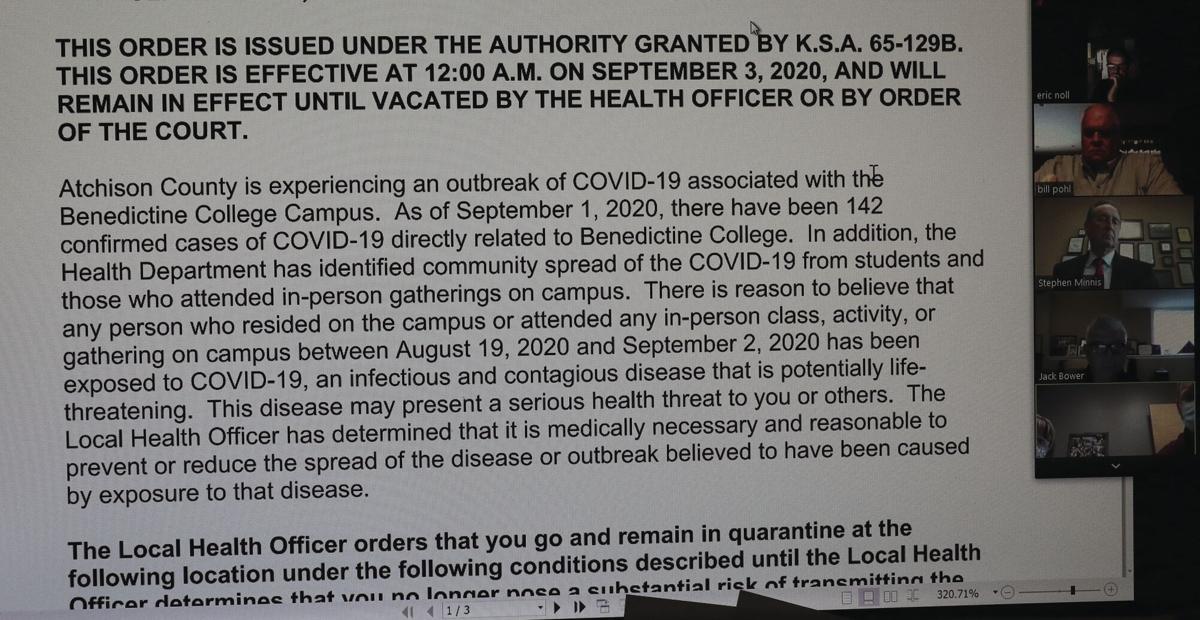 A screenshot of the original emergency health order showing the number of confirmed cases that raised concerns, prompting an order to quarantine.

Benedictine College students wear masks as they walk on campus at this private liberal arts college in Atchison.

A screenshot of the original emergency health order showing the number of confirmed cases that raised concerns, prompting an order to quarantine.

Atchison County health officials and Benedictine College leaders met Thursday morning as part of possible revision of a pending quarantine of the campus, but the resolution might come later than expected.

Negotiations were ongoing throughout the day said Steve Johnson, the college's marketing and communications director.

“There will be no final resolution today,” Johnson said late Thursday afternoon. “Business as usual tomorrow at Benedictine as the negotiations continue.”

Benedictine leaders were advised Wednesday that health officials intended to impose a quarantine on the campus where a number of COVID-19 cases have been reported among students and staff, driving up the county's overall case count in the weeks since classes started.

Benedictine staff have proposed a compromise that is currently under the health officials'review, Johnson said.

Health officials indicated they would notify the college of any amendments to the initial quarantine order.

The first order to go into and remain in quarantine was presented when Atchison County commissioners, the health officials and Benedictine leaders were virtually present during a special meeting Wednesday evening to discuss a rapid rise in COVID-19 cases among campus community and what to do about it.

Lanter said the revised plan was not presented Thursday, and the plan will not go into effect Friday. If the plan does go as proposed the students will be sequestered in isolation among their cohorts within their residential quarters, only leaving their respective areas to obtain packed meals from the cafeteria and practice religious freedom to participate in liturgical services. Lanter conveyed his belief there will be a new order to present sometime on Friday.

The quarantine initially was planned to become effective after midnight Thursday but was delayed a day after Benedictine President Stephen Minnis raised concerns that the plan is too restrictive and might have adverse emotional effects on the students because it would hinder their ability to attend Mass.

This could be devastating to the college, Minnis said.

Linda Henry and Tom Hoopes, of the college, agreed with Minnis. The Benedictine leaders all agreed they have been implementing various steps to mitigate the spread of the pandemic. Currently there are 132 students in quarantine, which represents about 13.2% of the campus population, Minnis said, and 13 of those are in isolation. The student population is about 2,000, and there are more students in the residential facilities than before, according to Henry.

Tackett, Forge and Lanter agreed that Benedictine's attempts to mitigate the virus are all good efforts, but said those efforts are not working because they came too late.

“They should have quarantined after they got here,” Lanter said. “Now because some did not do it at home they have brought it into our community.”

Forge said as the health officer it would be negligent of her not to put this order in place in an effort to protect the health and wellness of the community as a whole during the pandemic. She said when Gov. Laura Kelly’s executive order quarantined the whole county within the first months of the pandemic for two weeks there were only 10 cases.

Forge clarified that some people who previously tested positive are now showing symptoms of a mutated strain of the virus.

According to the initial order, presented to commissioners, Benedictine employees will be exempt from some of the restrictions in the order.

Mike Kuckelman and Minnis, both of whom are attorneys, commented about the legal ramifications if the order becomes effective.

Kuckelman said he was virtually present at the meeting in an individual capacity as a citizen, and he said he was disturbed by the order. He advised that students subject to the quarantine have the right to file an objection after the order becomes effective and have a hearing with 72 hours.

Plaintiffs have the right to an attorney to represent them. The court cases have the potential to cost the county a substantial amount of money, Kuckelman said.

On Thursday morning, Kuckelman said he was in the process of drafting documents for students wanting a hearing. During the hearings the county must prove the student is a risk different than the risk everyone presents, Kuckelman explained.

County Chairman Jack Bower said the commissioners have no authority to override the health officer. However, he said he would like to see some sort of a moratorium to think about the situation and find a resolution.

We must care for each other as humans. Sounds like both sides think they are doing what is best for students and community members. Having said that, this also sounds like alarmist and misinformed-health-leader rhetoric, pursuing action based on incomplete information and the mistaken notion that Covid-19 is dangerous to more than an extremely small sector of our population.

“They should have quarantined after they got here,” Lanter said. “Now because some did not do it at home they have brought it into our community.”--This comment assumes we as humans have control over everything, that Covid-19 wouldn’t have come to Atchison if it weren’t for less-than-ideal student/college behaviors. This is absurd.

According to this story Health Chief Forge thinks she would not be doing her job well if she didn’t put the order in place. I respect this thought, but it seems like an overreaction to me. Forge also says, ”... that some persons who previously tested positive, are now showing symptoms of a mutated strain of the virus.” Again, this is alarmist language that, for 99.xx% of people, and perhaps 100% of people, has no practical meaning.

Yet more alarmist rhetoric: “Tackett, Forge and Lanter agreed that BC’s attempts to mitigate the virus are all good efforts, but it was not working because it was too late.” Too late for what? Some students have tested positive? Maybe are sick, too? Is a large percentage of community members entering hospitals? Do we think Covid-19 wouldn't have come to Atchison without college kids? Are lots of students being admitted to hospitals? Does Atchison County have a unique, radical outbreak?

There are no perfect solutions, but we need to be careful making decisions. How about an approach that balances behavior restrictions concomitant with Covid-19’s lethality relative to other normal ways of dying (and our mostly lack of strict mitigation efforts therein), and considers that keeping our thumb on the “pause” button of life can be damaging in a way that’s difficult to measure?

Plotting to data shared by the Atchison County health organization suggests that COVID cases in the county started to climb before the students arrived – especially among those 50 to 59 years of age. There is also a notice from the county health organization that there was a positive case with someone who attended the county fair’s livestock auction on August 7. By August 14, when only about 1/3 of the students were moving in, the number of positive cases in the county had increased over 50%.

There is no mention in this article about how each student was given to a rapid virus test as they arrived. This resulted in the isolation of those who tested positive and a quarantine of those who were in close contact with anyone who tested positive. This is the model for strict contact tracing and quarantining that many cities and counties across the states have attempted to implement.