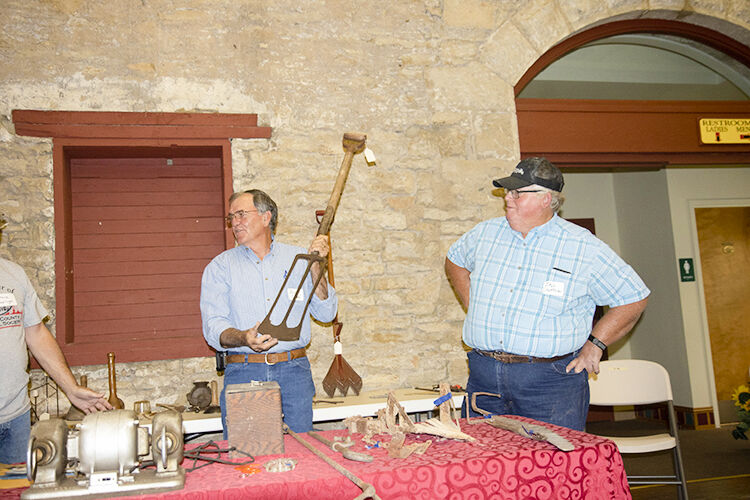 Jeff Hoffman and Bob Chew discuss article brought to meeting. After much discussion they decided it was a tool to dig through clay soil.

Jeff Hoffman and Bob Chew discuss article brought to meeting. After much discussion they decided it was a tool to dig through clay soil.

Covid-19 disrupted lives and annual meetings alike, as was the case for the 2020 Atchison County Historical Society meeting. In high spirits, Steve Caplinger, director of the historical society, welcomed a large membership group to the 2021 meeting. He started the meeting with the good news of membership growth. Year-over-year memberships grew by 200% and gained 3 new life memberships.

Numerous small grants have given resources to expand the library; such as increasing digitizing of the collection of negatives from the Atchison Globe. Several volunteers have helped with the scanning of over 300,000 negatives and logging the pictures into categories. Sterling Falk has added 2400 or corrected a small amount of the pictures from the project.

A project has been completed with the fire truck taken out of storage and set up in the museum for the public to view.

“After years in storage that is a big project completed,” Caplinger said.

Steve also talked about outreach to the schools and local groups for tours of the museum. There have been a small number of tours given but he feels that an effort needs to be made, especially to the schools, to show the amount of hard work put into the addition of new exhibits.

The historical society has received a memorial for the addition of an exhibit to be placed in the Effingham City Hall. More exhibits will be forthcoming in other county towns.

A change in the Amelia exhibit was moved to the AE Hanger Museum. Currently, a new exhibit at the museum is being created featuring the work of Bob Thompson and Charlie Wagner. Also, a model train exhibit has been put into place with plans for future expansion.

Following the election of board members (follow-up article coming), the program called “What Iz It” was presented by Jeff Hoffman and Bob Chew, local auctioneers. Members were invited to bring in artifacts to stump Jeff and Bob. Approximately 25 articles were shown and then Jeff and Bob told the crowd what the artifacts were and how they were used. Their knowledge of antiques showed as only 2 items stumped the experts.