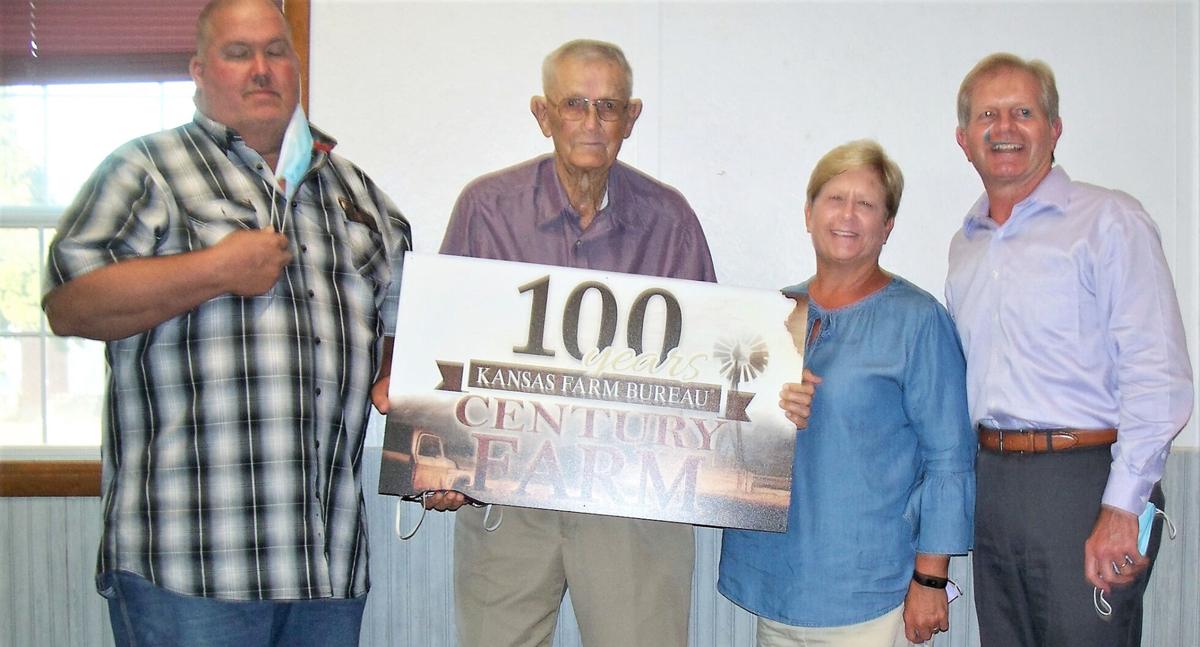 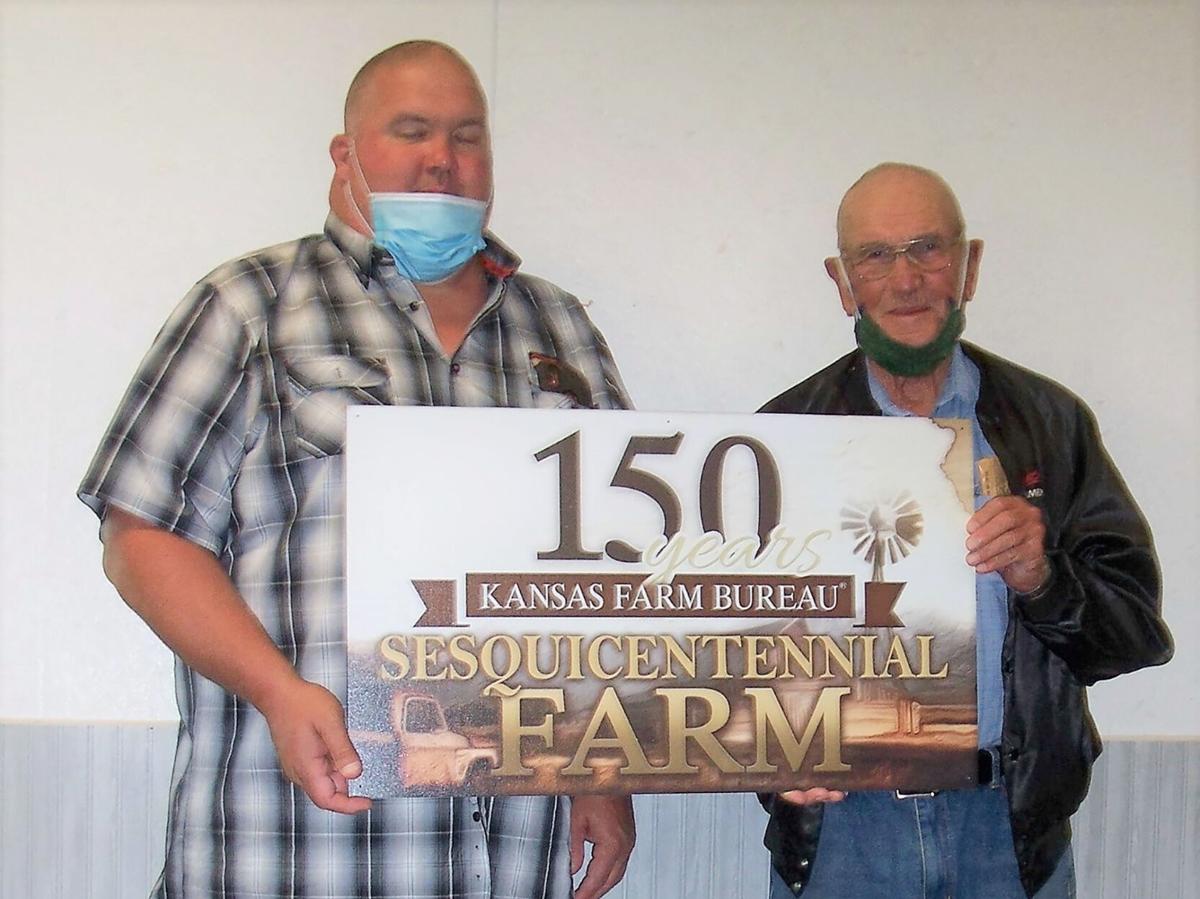 This is a photo of Charles Schletzbaum, Atchison County Farm Bureau president and Raymond Erpelding receiving the Sesquicentennial Farm Bureau sign honoring the Erpelding Farm since 1868.

This is a photo of Charles Schletzbaum, Atchison County Farm Bureau president and Raymond Erpelding receiving the Sesquicentennial Farm Bureau sign honoring the Erpelding Farm since 1868.

The Erpelding Farm: The Erpelding Farm since 1868, located near Atchison, received a Kansas Farm Bureau Sesquicentennial sign. All of Raymond’s great grandparents were born in Germany and came up the Mississippi River to St. Louis then moved west following the Missouri River. Raymond Erpelding’s great grandfather, John Enzbrenner (1838-1906) got off the boat at Weston. After leaving Weston, he bought a farm north of Lancaster and later sold this farm. He then bought 80 acres at Eden. When he died in 1906 he owned 400 acres. Nick Ernzbrenner (1892-1949), Raymond’s grandfather, inherited 80 acres. Raymond purchased the land on Labette Road in 1955. Peter Erpelding, son of Raymond, is the current owner. The present farm home “contains” the original house and grass is the main crop on the farm.

Diana Henderson, Sharon Radetic, & Julie Ellerman- Gormley Family Farm: The Gormley Family Farm owned by Dianna Henderson, Sharon Radetic , and Julie Ellerman has been in the family for 154 years. They are receiving a Kansas Farm Bureau Sesquicentennial Farm sign. The farm is located near Lancaster, Kansas. The land was originally a bounty given to a seaman Henry O. Parks, as payment for military service in the “War with Mexico”. The first Gormley owner Great,Great Uncle Charles, bought 160 acres from Parks in 1866. Charles Gormley farmed the land for a short time and then sold it to Patrick Gormley, Great Grandfather of Dianna, Sharon, and Julie. Other family members owning the farm are Grandfather, Herman Gormley, Uncle, Raymond Gormley and parents, Robert L. and Mary Ellen Christian. A large barn, an original structure, is still on the farm. The present home was built 1973. Today the farm produces corn and soybeans and has pasture for cattle.

The Gus and Lizzie Gigstad Family Farm: Nortonville, is honored as a Kansas Farm Bureau Century Farm. Gustav A. Gigstad acquired the parcel in March, 1920. He owned it until his death in 1977. It was purchased from the Gus Gigstad Estate by Albert and Katie Gigstad, son and daughter-in–law, in 1978. The property is now part of the Albert Gigstad Trust.

Gus purchased the two 40 acre parcels from Colfax and Addie Babcock for $14,000 ($175 per acre), a steep price at the time. Land prices would eventually collapse in the 1920’s when the Great Depression hit. Gus was born on a farm near Lancaster,KS, the eldest of nine children born to Ole and Severine Gigstad, who came from Norway in 1883. He married Elizabeth (Lizzie) Watz, Nortonville, in 1913. They had seven children and today almost all of their descendants live within 30 miles of the farm.

There are no original buildings but four cedar trees, estimated to be over 120 years old, are still standing on the home site. The farm is in crop production, with corn and soybeans as the primary crops. Cattle have been raised on the farmstead all 100 years.

Congrove/Talliaferro Family Farm: Carolyn Taliaferro is receiving a Kansas Farm Bureau Century Farm sign for the Congrove/Taliaferro Family Farm located southeast of Effingham, Kansas. Her grandparents, Edgar and Eliza Congrove, purchased the acreage in 1919 from Louise Trompeter for $150 per acre. Edgar was born near Dallas City, Illinois. He owned and operated a threshing machine. Currently, corn, soybeans, and cattle are raised on the farm .Carolyn’s parents, Ernest and Leona Congrove became owners of the land in 1938 and Carolyn became the owner in 2003.

Wehking Family Farms, LLC (Gilbert Wehking family): The Wehking Family Farms, LLC, Lancaster, is being honored as a Kansas Farm Bureau Century Farm . The eighty acres was purchased in 1899 by Christ Wehking who was born in Minden, Germany, in 1877. After his father’s passing, his mother remarried and had half siblings. She sent him to the USA with friends so he could have a better life. He was 14 years old when he left Germany and never saw his family again. He was 21 years old when he purchased this 80 acre farm from Stephen and Margaretta Robertson for a total cost of $3000 or $37.50 per acre. Christ farmed with horses and built a small house with an upstairs. There was also a detached cellar and a barn. There are only parts of the original barn still standing.

Sara Domann, Cummings, is the daughter of Brian and Julie Fowler and Travis Domann. Sara is a graduate of Maur Hill-Mount Academy. She plans to attend KSU and major in biology.

Shannon Funk, daughter of Rick and Kelyne Funk , Atchison, is a graduate of Maur Hill-Mount Academy. She plans to attend KU and earn a degree in Interior Architecture and Design.

Isaac Papineau, son of Jeri Stephenson, Lansings, is a graduate of Lansing High School. He plans to attend KU to major in electrical engineering.

Nathan Sowers, son of Michael and Susan Sowers, Atchison, is a graduate of Atchison High School. He plans to attend KSU to major in engineering.