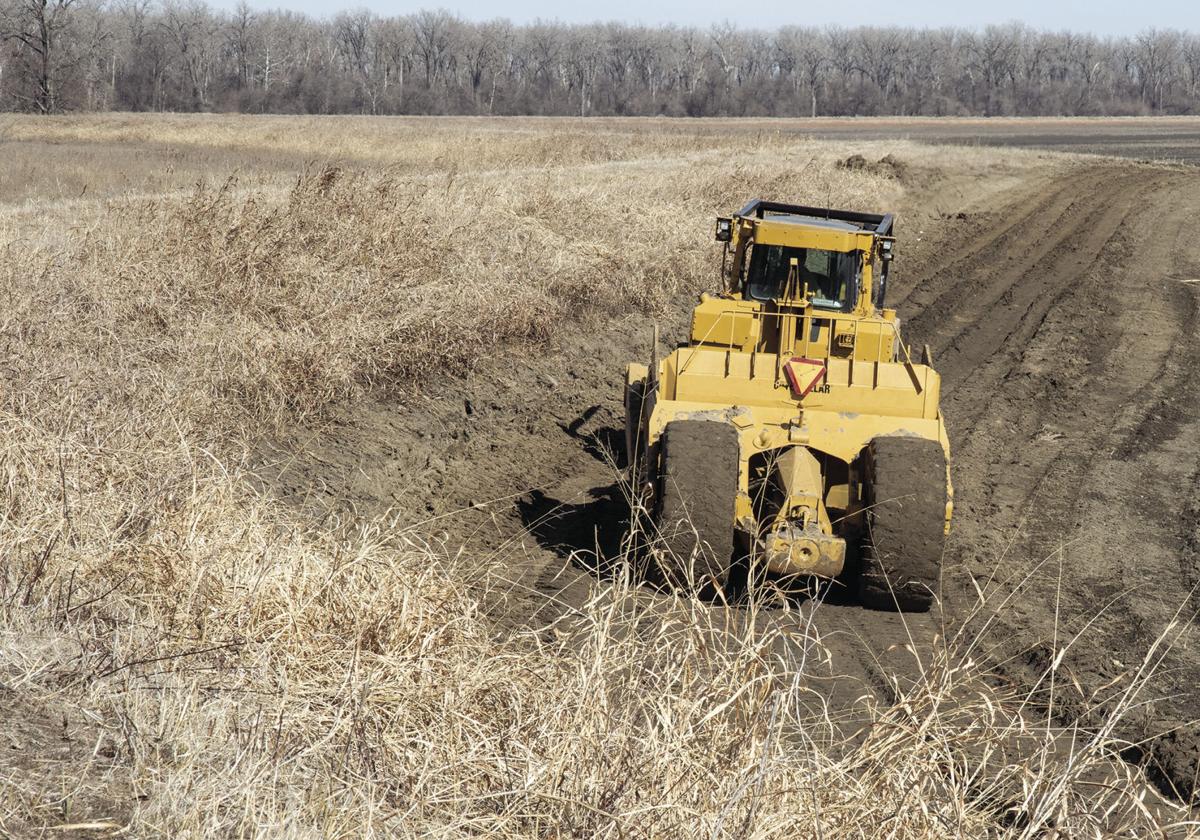 Heavy equipment drives on Monday along the levee in the area of Winthrop, Missouri, removing compacted sediment the previously flooded river left behind. 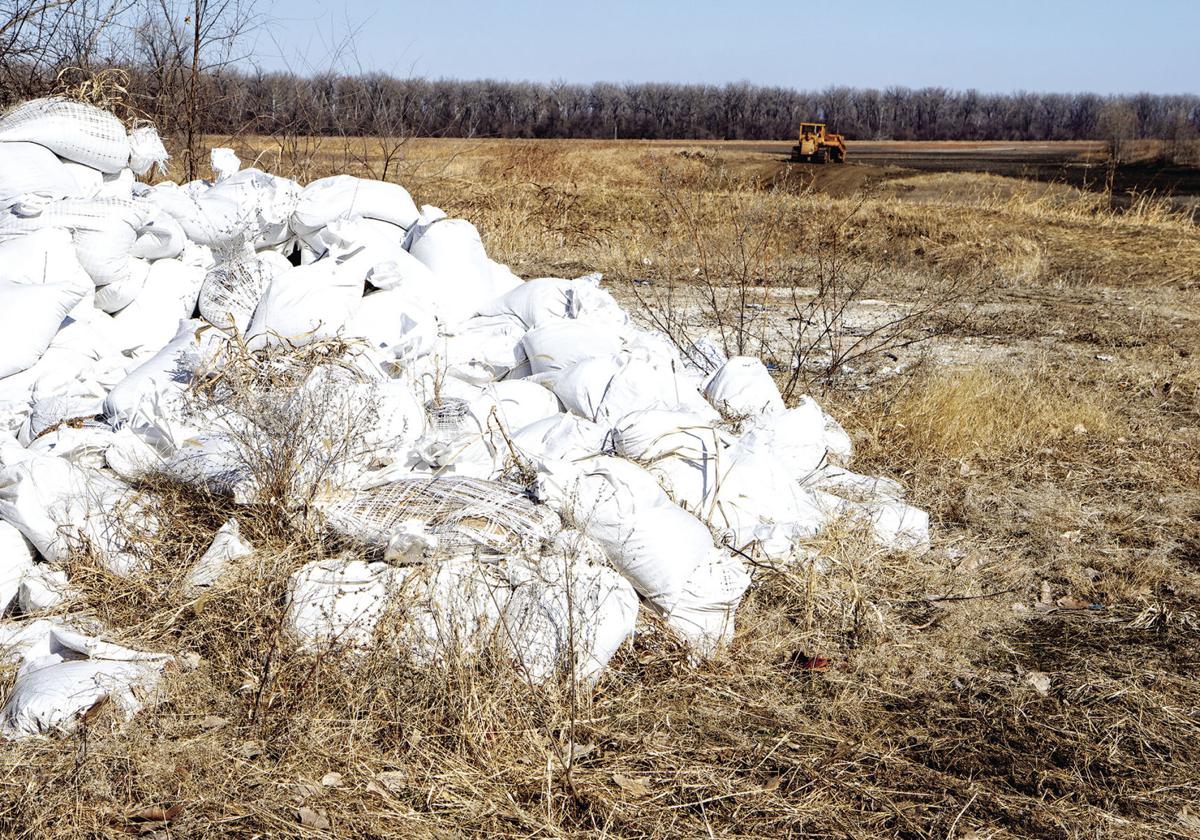 Sandbags left over from flood prevention efforts in Spring 2019 remain piled on top of the Rushville-Sugar Lake Levee. 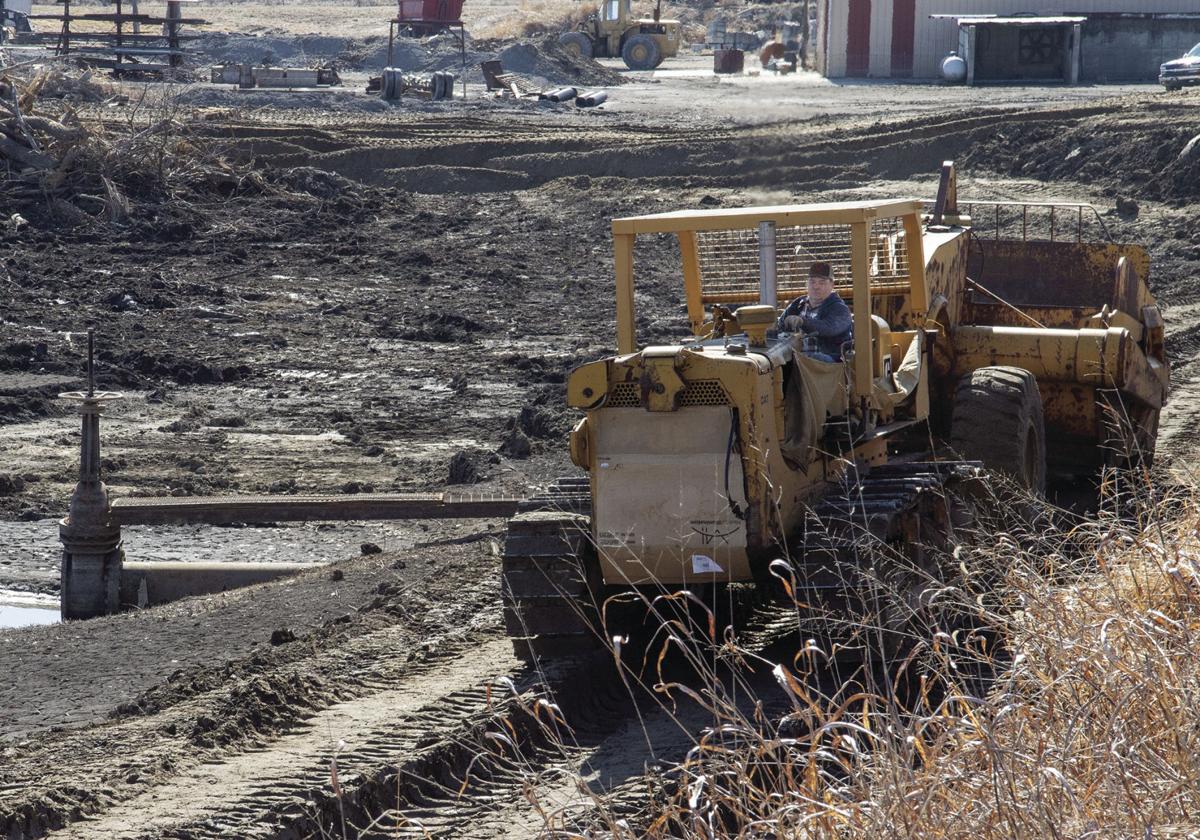 Floodwaters naturally prevent the affected land from being farmed, but the sediment and debris left behind must also be cleared to allow for planting.

Heavy equipment drives on Monday along the levee in the area of Winthrop, Missouri, removing compacted sediment the previously flooded river left behind.

Sandbags left over from flood prevention efforts in Spring 2019 remain piled on top of the Rushville-Sugar Lake Levee.

Floodwaters naturally prevent the affected land from being farmed, but the sediment and debris left behind must also be cleared to allow for planting.

It is in the nature of a major flood that water gets everywhere, destroys everything and requires significant

efforts to contain, evade and recover from, but these costs are often enough far exceeded by cleanup expenses.

Mike Dulin, emergency management specialist with the Kansas City District of the U.S. Army Corps of Engineers, is devoting much of his time toward

assesssing the damage, from Omaha, Nebraska, to the terminus of the Mighty Mo at St. Louis. However, levee repair and rebuilding efforts will add up to at least $100 million within his jurisdiction alone, when all is said and done.

The Atchison area is protected by two independently owned, federally regulated levee districts, which are built with

private funds on privately owned land, but are restored in the event of a flood along an 80-20 cost-share scheme.

The Rushville-Sugar Lake Levee sustained a massive breach in March 2019 when it was overtopped and its earthen structure become compromised at multiple locations, Dulin said, and it has only recently dried out enough to make reconstruction practical.

Time is of the essence. While Dulin emphasized that the 2019 flooding is thought to have been a “freak event,” the Corps envisions that smaller-scale flooding will be a bigger concern over a longer stretch of the calendar each year. Crews strive get the levees restored before winter snowmelt and spring rains raise the river back up.

“The Rushville-Sugar Lake Levee took an extremely long time for our survey crews to be able to go out and access it,” Dulin said. “It’s got a very big breach on the north end of it, and so water was flowing through that breach for 200-plus days, probably. It took a very long time to dry out.”

As a consequence, the levee will likely not be repaired by the beginning of the summer, and possibly not until late summer or early fall.

“Rushville-Sugar Lake, north of Highway 59, is damaged very heavily,” Dulin said. “Normally, once we get a request set up with a contractor, they’ll have typically 120 days to complete the repair work. And so, that’s probably what we’re looking at on Rushville-Sugar Lake as well.

“Once we’re able to get a contract awarded, there will be a 120-day window for it to be done; there’s obviously weather contingencies and things like that.”

The Bean Lake Levee, named for the small body of water to the immediate northwest of Iatan, Missouri, also took damage, and it is also part of the levee district 80-20 cost share scheme. It should be repaired by the beginning of summer, according to Dulin.

“Our survey teams were able to get out a little earlier on that one,” he said. “We’ve been working with the levee sponsors to get their cost share agreements and real

estate arrangements all set up. So that one is moving along pretty well. We’re close to

Dulin emphasized that the magnitude and duration of the 2019 flood is almost without precedent. So, the chances are low that the currently damaged levees will produce the same scale seen last year of floodwater where it doesn’t

belong. Last year, while the flood continued, U.S. Highway 59 was closed multiple times as the low-lying road became subsumed by the swollen river. The conditions that created this inundation are probably behind us, Dulin said.

“Aare we seeing more frequent, minor flooding? I would say, ‘Yes.’ That’s one of the messages we’re trying to get out: Flood season’ is now year-round. We used to say it starts in mid-April and ends in September.

“Now, for example back in 2015, we’ve seen flooding in October, December. We are seeing more frequent flooding, but it wil not be on the same magnitude of 2019, or even 2011, for that matter.”

As things stand, the 2019 flood will go down in Corps records as the most awful event since 1993, despite higher

The Corps, in keeping with its military traditions, stays out of politics, and generally doesn’t tell policymakers what actions specifically to take in any context. However, Dulin affirmed that the increased pace of flooding that’s been observed is something officials ought to be looking at.

“I would certainly think that, but a lot of these events that we get are rainfall driven,” he said. “There’s not a lot that you can do to prevent that. It’s very dependent on where the precipitation falls, how much of it falls.”

One of the main defenses are the flood control reservoirs that are located in the Dakotas. The lowest such structure is a name many local residents will be familiar with, to the extent that news associated with it brought on a sense of dread at times in 2019: Gavins Point Dam. Once water gets beyond there, there’s no stopping it.

Dulin emphasized that there is only so much that can be done to impound the water and keep it from flooding out communities downriver.

“We can capture some of that,” he said. “But if the precipitation occurs below our flood control reservoirs, or if it occurs in amounts like we had 2019, there’s not a whole lot you can do to prevent flooding in those scenarios.”