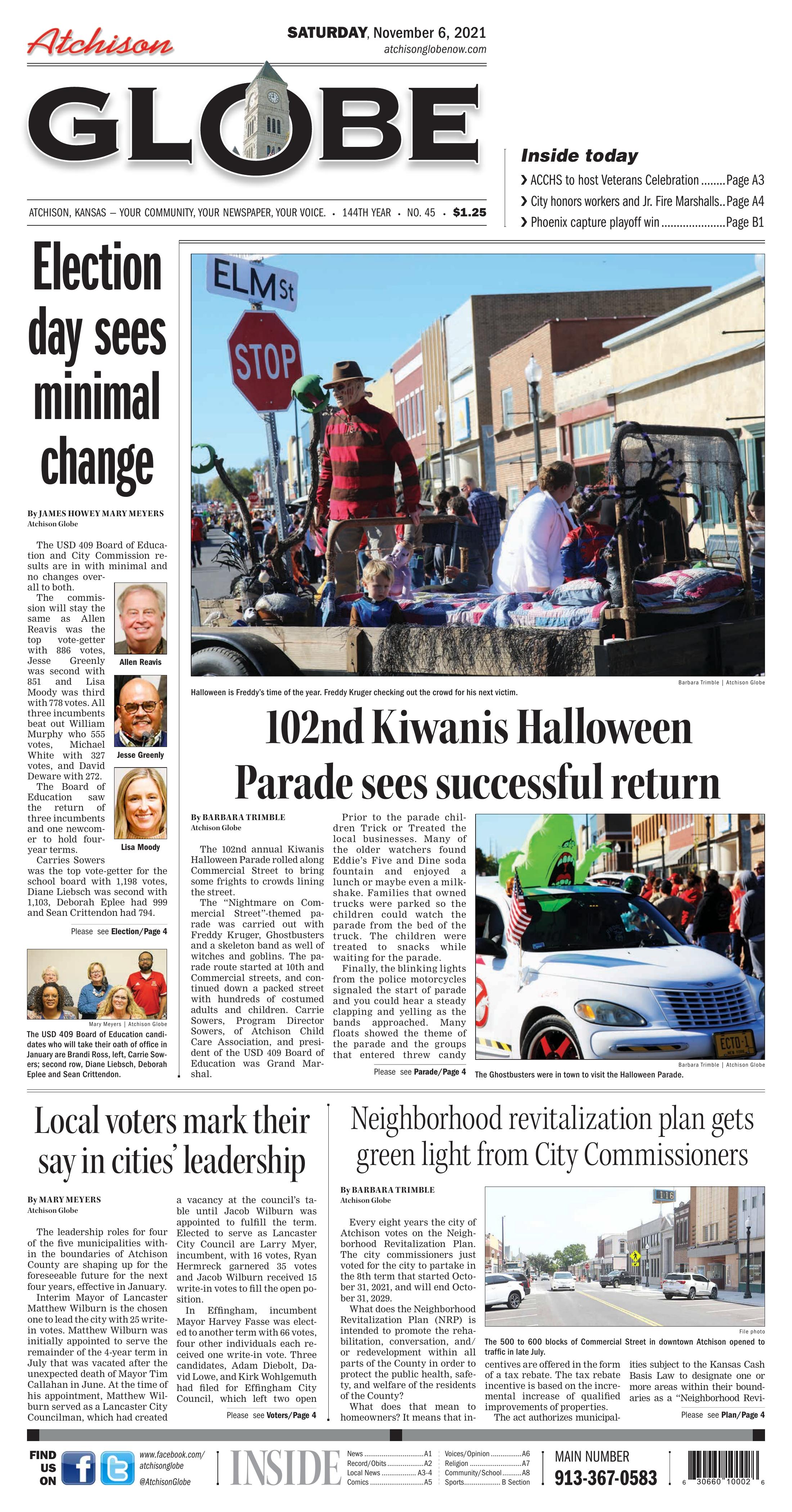 Halloween is Freddy’s time of the year. Freddy Kruger checking out the crowd for his next victim.

The Ghostbusters were in town to visit the Halloween Parade.

Children of all ages attend the Halloween Parade.

Beautiful day brought a large crowd to view the parade.

Beautiful day brought a large crowd to view the parade.

The 102nd annual Kiwanis Halloween Parade rolled along Commercial Street to bring some frights to crowds lining the street.

The “Nightmare on Commercial Street”-themed parade was carried out with Freddy Kruger, Ghostbusters and a skeleton band as well of witches and goblins. The parade route started at 10th and Commercial streets, and continued down a packed street with hundreds of costumed adults and children. Carrie Sowers, Program Director Sowers, of Atchison Child Care Association, and president of the USD 409 Board of Education was Grand Marshal.

Prior to the parade children Trick or Treated the local businesses. Many of the older watchers found Eddie’s Five and Dine soda fountain and enjoyed a lunch or maybe even a milkshake. Families that owned trucks were parked so the children could watch the parade from the bed of the truck. The children were treated to snacks while waiting for the parade.

Finally, the blinking lights from the police motorcycles signaled the start of parade and you could hear a steady clapping and yelling as the bands approached. Many floats showed the theme of the parade and the groups that entered threw candy to children along the parade route. Not to be left out, several canines also participated and if any candy was left on the road they also served as the cleanup crew.

Political candidates took advantage of this well attended gathering with vehicles decorated with posters. The candidates themselves waved to the crowds.

The bands added to the atmosphere with great song renditions. The Atchison High School band signaled the end of the parade was near. The horn of the firetruck was in good voice and let everyone know that the old tradition was upheld for 2021.

The 500 to 600 blocks of Commercial Street in downtown Atchison opened to traffic in late July.

Every eight years the city of Atchison votes on the Neighborhood Revitalization Plan. The city commissioners just voted for the city to partake in the 8th term that started October 31, 2021, and will end October 31, 2029.

What does the Neighborhood Revitalization Plan (NRP) is intended to promote the rehabilitation, conversation, and/or redevelopment within all parts of the County in order to protect the public health, safety, and welfare of the residents of the County?

What does that mean to homeowners? It means that incentives are offered in the form of a tax rebate. The tax rebate incentive is based on the incremental increase of qualified improvements of properties.

The act authorizes municipalities subject to the Kansas Cash Basis Law to designate one or more areas within their boundaries as a “Neighborhood Revitalization Area.” The term “municipality” specifically includes any county, township, city, or school district.

So after all that information here is the breakdown in layman’s terms. If a dilapidated or old residence is determined to be a public health, safety hazard along with an area where there is a substantial number of deteriorating structures and is deemed to impair growth it is considered an economic liability. Another is an area in which there is a predominance of buildings or improvements which because of age, history, architecture, or significance should be preserved or restored would be considered under this act.

Under this act, if two or more municipalities want to invoke the NRP they may enter into Interlocal Cooperation Agreements to increase efficiency through cooperation and to obtain the mutual advantage. This is especially helpful for the smaller municipalities.

Why is this so important to Atchison County? Atchison County is currently suffering from poor economic conditions and ranks 76th out of 100 counties in Kansas. The following information was released by K.S.A. 12-17:

The trade pull factor in Atchison County is .81, which indicated residents are spending dollars outside of the county.

Personal per capita income is the 6th lowest in the state of Kansas, at $40,335.

Atchison County has a shrinking labor force with a 6.5% reduction in the labor force over the past five years. Many of the residents are living on fixed incomes which does not enable them to renovate or rehabilitate their homes.

The housing market is shrinking within the county. In 2020 the county had 6900 housing units. The county has decreased in that number to 6814 or 86 units. In addition, there are becoming more renter-occupied homes rather than owner-occupied homes. Incentives to rehabilitate and revitalize older homes would provide opportunities for homeowners with limited resources and beautify neighborhoods.

There are several vacant properties within the county that could benefit from this program which put those properties back on the tax rolls.

Atchison County relies more on local property tax valuation to address the volatility of state and federal revenue resources that have been eliminated or reduced. This increased reliance on property tax revenues serves as a deterrent to investment in property improvements. In time this effect places an even larger burden on property owners who must maintain essential services.

The leadership roles for four of the five municipalities within the boundaries of Atchison County are shaping up for the foreseeable future for the next four years, effective in January.

Interim Mayor of Lancaster Matthew Wilburn is the chosen one to lead the city with 25 write-in votes. Matthew Wilburn was initially appointed to serve the remainder of the 4-year term in July that was vacated after the unexpected death of Mayor Tim Callahan in June. At the time of his appointment, Matthew Wilburn served as a Lancaster City Councilman, which had created a vacancy at the council’s table until Jacob Wilburn was appointed to fulfill the term. Elected to serve as Lancaster City Council are Larry Myer, incumbent, with 16 votes, Ryan Hermreck garnered 35 votes and Jacob Wilburn received 15 write-in votes to fill the open position.

In Effingham, incumbent Mayor Harvey Fasse was elected to another term with 66 votes, four other individuals each received one write-in vote. Three candidates, Adam Diebolt, David Lowe, and Kirk Wohlgemuth had filed for Effingham City Council, which left two open positions. The results of the Effingham City Council are as follows: Diebolt – 52, Wohlgemuth – 50, and Lowe – 47. Two men received the majority of write-in votes, Richard Bomberger – 22 and Carl Bosch – 21.

The potentials and the number of votes they received are Jordan Clem – 8 votes; Linda Ferris — 8 votes; and Donald Ball – 7 votes. There is a three-way tie between Joel Clem, Kimberly Clem, and Ronnie Funk. Jamie Funk and Amy Clem each received one vote. After a determination concerning the eligibility of the potentials, it will likely be up to the county election officials to determine how to any tie votes, by the flip of a coin or pulling an eligible name out of a hat.

Dana Fletcher was one person who received a write-in vote.

The actual outcome of the election results remains unofficial until the outcome of the certification of the ballot counts, which will be after the Board of the Atchison County Commission Canvassing Board reviews the voted ballots. The canvassers expect to conduct a review at the end of the scheduled 1 p.m. Atchison County Commission meeting on Tuesday, Nov. 9 at the Emergency Operations Center at 10443 U.S. Highway 59 along the outskirts of Atchison.

The USD 409 Board of Education candidates who will take their oath of office in January are Brandi Ross, left, Carrie Sowers; second row, Diane Liebsch, Deborah Eplee and Sean Crittendon.

The USD 409 Board of Education and City Commission results are in with minimal and no changes overall to both.

The commission will stay the same as Allen Reavis was the top vote-getter with 886 votes, Jesse Greenly was second with 851 and Lisa Moody was third with 778 votes. All three incumbents beat out William Murphy who 555 votes, Michael White with 327 votes, and David Deware with 272.

The Board of Education saw the return of three incumbents and one newcomer to hold four-year terms.

Carries Sowers was the top vote-getter for the school board with 1,198 votes, Diane Liebsch was second with 1,103, Deborah Eplee had 999 and Sean Crittendon had 794.

Brandi Ross earned 1,218 votes to continue serving her two years in the unexpired term she was appointed to last year.

USD 377 Board of Education incumbents, Lori Lanter, Kelli Bottorff, and Corey Neill were all successful in their respective bids for re-election. Of the three incumbents, Neill was the only one who faced opposition.

As of the election night count of ballots, there were 411 votes cast for Bottorff for Position 4, and four write-ins for different individuals. Lanter, Position 6 candidate, had 394 votes cast in her favor. There were seven write-in votes for other persons.

Deputy Election Officer Kaylee Vanderweide, Atchison County, said all election night results are unofficial until approved by the Atchison County Canvassing Board convenes to review the election ballots before their certification. The canvass is tentatively set to take place sometime during the Atchison County Commission 1 p.m. meeting on Tuesday, Nov. 9 at the Emergency Operations Center, 10443 U.S. Highway 59.