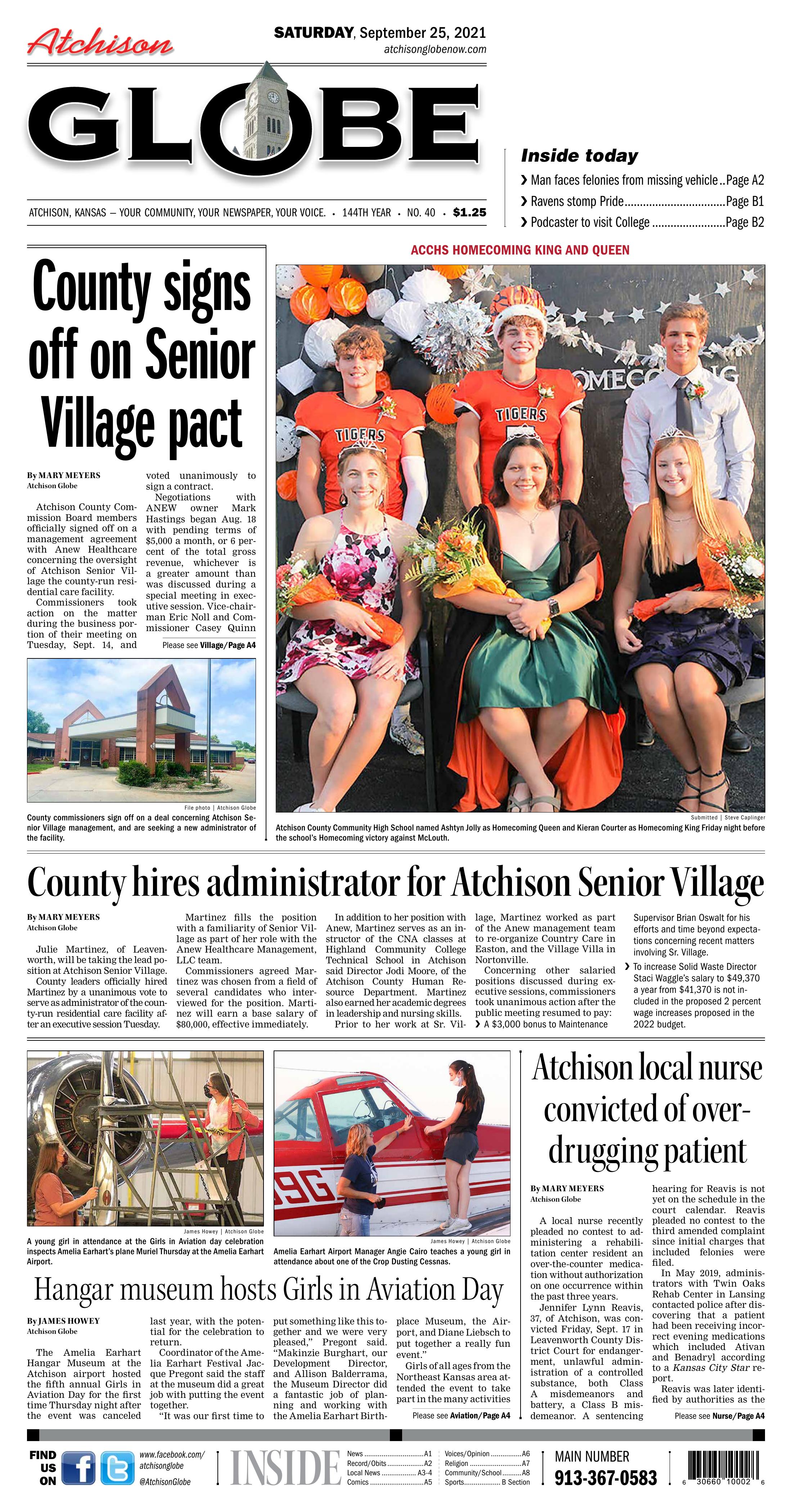 County commissioners sign off on a deal concerning Atchison Senior Village management, and are seeking a new administrator of the facility.

Commissioners took action on the matter during the business portion of their meeting on Tuesday, Sept. 14, and voted unanimously to sign a contract.

Negotiations with ANEW owner Mark Hastings began Aug. 18 with pending terms of $5,000 a month, or 6 percent of the total gross revenue, whichever is a greater amount than was discussed during a special meeting in executive session. Vice-chairman Eric Noll and Commissioner Casey Quinn made the decision by a 2-0 vote. Bower was absent at that time.

After commissioners made their decision, Chairman Jack Bower said what started initially began as a simple agreement has become a very detailed contract negotiated by County Counselor Patrick Henderson.

Noll credited Quinn for being very diligent in her work concerning the matter. Quinn represents Atchison County on the Sr. Village Board.

“I feel very comfortable with it,” Noll said.

Commissioners agreed it is a decision that they share an understanding the staff residents and their families are comfortable with.

Commissioners considered contract management of the facility after they accepted the resignation from former Director Haley Tinch effective immediately on Aug. 10 amid an outbreak of 26 positive COVID-19 cases among residents and staff in the facility.

Commissioners convened for a special meeting Thursday, Sept. 16 to recess into executive sessions to conduct interviews for the Senior Village Administrator position.

Julie Martinez, of Leavenworth, will be taking the lead position at Atchison Senior Village.

County leaders officially hired Martinez by a unanimous vote to serve as administrator of the county-run residential care facility after an executive session Tuesday.

Martinez fills the position with a familiarity of Senior Village as part of her role with the Anew Healthcare Management, LLC team.

Commissioners agreed Martinez was chosen from a field of several candidates who interviewed for the position. Martinez will earn a base salary of $80,000, effective immediately.

In addition to her position with Anew, Martinez serves as an instructor of the CNA classes at Highland Community College Technical School in Atchison said Director Jodi Moore, of the Atchison County Human Resource Department. Martinez also earned her academic degrees in leadership and nursing skills.

Prior to her work at Sr. Village, Martinez worked as part of the Anew management team to re-organize Country Care in Easton, and the Village Villa in Nortonville.

A $3,000 bonus to Maintenance Supervisor Brian Oswalt for his efforts and time beyond expectations concerning recent matters involving Sr. Village.

To increase Solid Waste Director Staci Waggle’s salary to $49,370 a year from $41,370 is not included in the proposed 2 percent wage increases proposed in the 2022 budget.

A young girl looks into the seats of the of the Command-Aire plane at the Amelia Earhart Airport.

Amelia Earhart Airport Manager Angie Cairo teaches a young girl in attendance about one of the Crop Dusting Cessnas.

A young girl in attendance at the Girls in Aviation day celebration inspects Amelia Earhart’s plane Muriel Thursday at the Amelia Earhart Airport.

The Amelia Earhart Hangar Museum at the Atchison airport hosted the fifth annual Girls in Aviation Day for the first time Thursday night after the event was canceled last year, with the potential for the celebration to return.

Coordinator of the Amelia Earhart Festival Jacque Pregont said the staff at the museum did a great job with putting the event together.

“It was our first time to put something like this together and we were very pleased,” Pregont said. “Makinzie Burghart, our Development Director, and Allison Balderrama, the Museum Director did a fantastic job of planning and working with the Amelia Earhart Birthplace Museum, the Airport, and Diane Liebsch to put together a really fun event.”

Girls of all ages from the Northeast Kansas area attended the event to take part in the many activities the museum had for the celebration, including paper airplanes, a scavenger hunt involved with “Muriel”, and being able to get an up-close look at the planes at the airport.

“It was so exciting to see so many girls interested in Aviation and several of them already knew quite a bit about airplanes and the airport,” Cairo said.

Pregont said hosting this event is a great preview for those in attendance on just what the museum will be like when finished next year.

“Hosting an event like this lets us give people an idea of what we all have to look forward to,” Pregont said. “We hope to continue to host events as we work toward the build-out of a wonderful STEM museum.”

A local nurse was was recently granted probation in connection with the  unlawful administration of a controlled substance without authorization in Leavenworth County District Court.

A local nurse recently pleaded no contest to administering a rehabilitation center resident an over-the-counter medication without authorization on one occurrence within the past three years.

Jennifer Lynn Reavis, 37, of Atchison, was convicted Friday, Sept. 17 in Leavenworth County District Court for endangerment, unlawful administration of a controlled substance, both Class A misdemeanors and battery, a Class B misdemeanor. A sentencing hearing for Reavis is not yet on the schedule in the court calendar. Reavis pleaded no contest to the third amended complaint since initial charges that included felonies were filed.

In May 2019, administrators with Twin Oaks Rehab Center in Lansing contacted police after discovering that a patient had been receiving incorrect evening medications which included Ativan and Benadryl according to a Kansas City Star report.

Reavis was later identified by authorities as the nurse giving out the extra medicine, an act described with photos and text messages.

According to the Star’s report indicating it was based on a press release issued from Leavenworth County Attorney Todd Thompson’s Office regarding a text message to the oncoming night nurse alleging Reavis had sent a photograph of the victim slumped over and sleeping in a wheelchair.

“Your (sic) welcome! I hope she is asleep most of the day tomorrow,” the text message said. “Hint hint.”

The victim suffers from dementia and the medication caused her to become lethargic and be hospitalized, prosecutors say, according to the Star.

In an interview with Lansing police, Reavis admitted to giving the medicine to the woman, saying she frequently displayed “exit-seeking” behavior — meaning she tried to wander away from the nursing home, the Star reported.

Reavis’ Defense Counsel Andrew Werring communicated via email to the Atchison Globe, the evidence presented at a preliminary hearing was that his client gave the resident a single 25 mg Benadryl tablet in addition to the prescribed medication. Reavis mistakenly believed there was a “standing order” authorizing her to do so because the resident had complained of “itchiness and other symptoms similar to an allergic reaction,” Werring said.

“Although my client regrets the text message and photograph that were sent, Werring said, “she continues to maintain that she had no criminal intent or desire to see any harm come to the patient.”

The Globe reached out to the Leavenworth County Prosecutor’s Office requesting a press release concerning the matter but has not yet received a response.