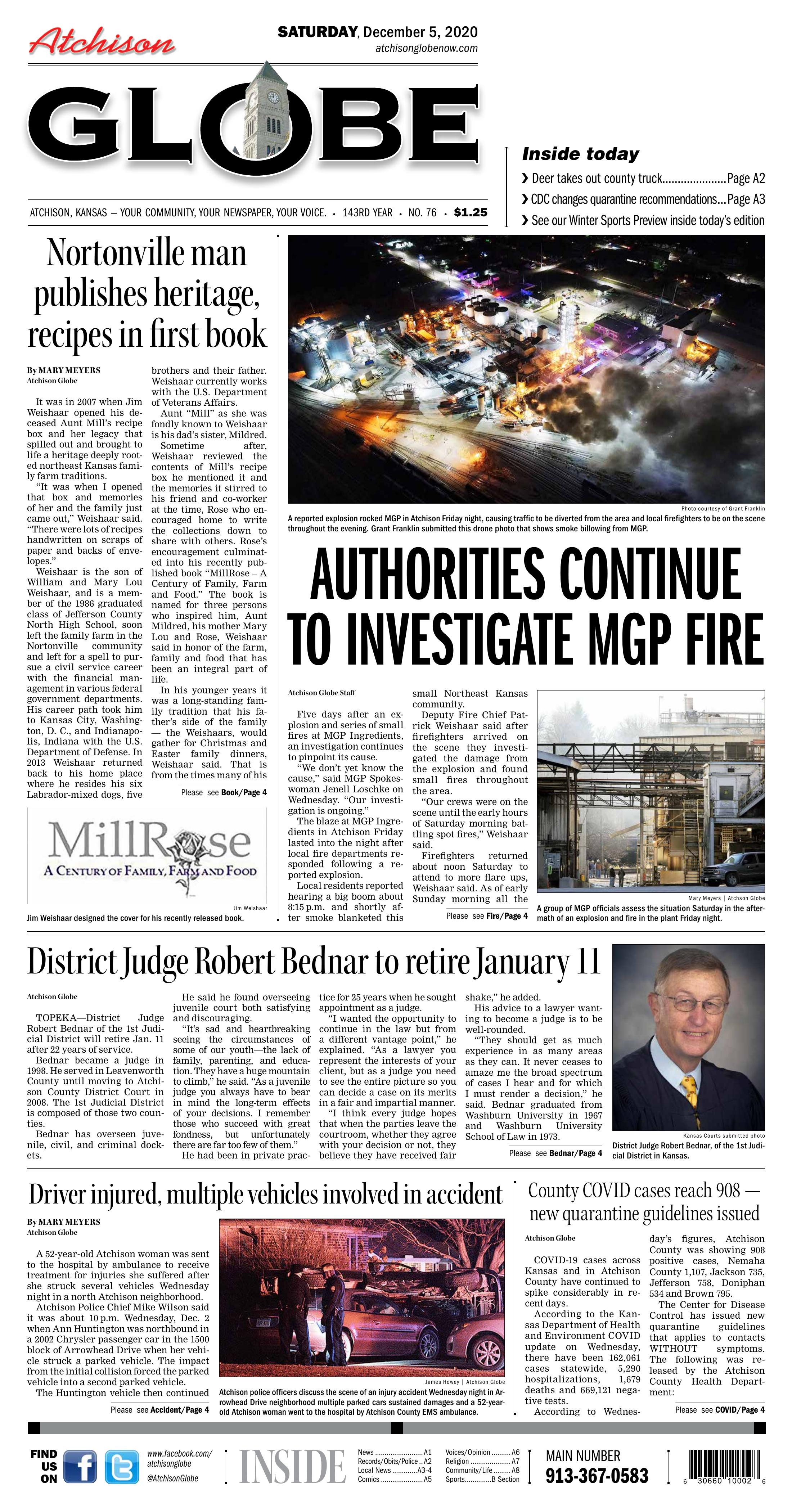 A reported explosion rocked MGP in Atchison Friday night, causing traffic to be diverted from the area and local firefighters to be on the scene throughout the evening. Grant Franklin submitted this drone photo that shows smoke billowing from MGP.

This photo from a drone and submitted by Grant Franklin shows the fire at MGP Friday night.

A reported explosion rocked MGP in Atchison Friday night, causing traffic to be diverted from the area and local firefighters to be on the scene throughout the evening. Grant Franklin submitted this drone photo that shows smoke billowing from MGP.

A drone photo, submitted by Grant Franklin, captured the night lights of Atchison in this photo and with it the smoke and blaze at MGP Ingredients.

This photo submitted by Randy Clark Silkwood shows a blanket of smoke over Atchison and flames erupting from MGP Ingredients in Atchison.

This is another submitted photo of MGP Ingredients in Atchison that shows emergency crews on the scene Friday night after an explosion.

A group of MGP officials assess the situation Saturday in the aftermath of an explosion and fire in the plant Friday night.

Some equipment appears to have sustained some charring atop the infrastructure inside the MGP plant.

Five days after an explosion and series of small fires at MGP Ingredients, an investigation continues to pinpoint its cause.

“We don’t yet know the cause,” said MGP Spokeswoman Jenell Loschke on Wednesday. “Our investigation is ongoing.”

The blaze at MGP Ingredients in Atchison Friday lasted into the night after local fire departments responded following a reported explosion.

Deputy Fire Chief Patrick Weishaar said after firefighters arrived on the scene they investigated the damage from the explosion and found small fires throughout the area.

“Our crews were on the scene until the early hours of Saturday morning battling spot fires,” Weishaar said.

Firefighters returned about noon Saturday to attend to more flare ups, Weishaar said. As of early Sunday morning all the small fires had been extinguished.

“Mostly the flare ups were debris that resulted from the explosion, pieces of insulation and small pockets of grain,” Weishaar said. “The smoldering pockets of grain also explained the odor that was reported by citizens on social media.”

AFD firefighters collected their equipment from the scene on Monday.

Police Chief Mike Wilson said his officers, along with firefighters and other emergency personnel responded to the initial dispatch and quickly blocked of Main Street, between 10th and 14th streets.

Local resident Grant Franklin submitted drone photos that shows smoke billowing from a certain area of the distillery, and other local residents have submitted photos as well.

Chief Wilson reported there were no injuries and all employees were able to be evacuated.

Mid-morning Saturday all streets adjacent to MGP had been cleared for regular traffic flow. A group of officials appeared to be assessing the scene within the a plant adjacent to a Main Street entrance between the distillery and food ingredient production sites, amid some smoldering near by and a smoky smell.

TOPEKA—District Judge Robert Bednar of the 1st Judicial District will retire Jan. 11 after 22 years of service.

Bednar became a judge in 1998. He served in Leavenworth County until moving to Atchison County District Court in 2008. The 1st Judicial District is composed of those two counties.

He said he found overseeing juvenile court both satisfying and discouraging.

“It’s sad and heartbreaking seeing the circumstances of some of our youth—the lack of family, parenting, and education. They have a huge mountain to climb,” he said. “As a juvenile judge you always have to bear in mind the long-term effects of your decisions. I remember those who succeed with great fondness, but unfortunately there are far too few of them.”

He had been in private practice for 25 years when he sought appointment as a judge.

“I wanted the opportunity to continue in the law but from a different vantage point,” he explained. “As a lawyer you represent the interests of your client, but as a judge you need to see the entire picture so you can decide a case on its merits in a fair and impartial manner.

“I think every judge hopes that when the parties leave the courtroom, whether they agree with your decision or not, they believe they have received fair shake,” he added.

His advice to a lawyer wanting to become a judge is to be well-rounded.

“They should get as much experience in as many areas as they can. It never ceases to amaze me the broad spectrum of cases I hear and for which I must render a decision,” he said. Bednar graduated from Washburn University in 1967 and Washburn University School of Law in 1973.

Bednar and his wife, Susan, have been married 53 years. They have three children, Matthew, Jennifer and Erin, and nine grandchildren.

“I would never have been able to succeed without the support of my wife, who has always been there for me,” he said.

District judges in the 1st Judicial District are appointed following a merit selection process. State statute requires a nominating commission to accept nominations, interview nominees, and forward the names of finalists to the governor, who appoints a replacement. After serving one year in office, the new judge must stand for a retention vote in the next general election to remain in the position. If retained, the incumbent will serve a four-year term.

On lookers gather in wake of a accident Wednesday night in the Arrowhead Drive neighborhood.

A 52-year-old Atchison woman was sent to the hospital by ambulance to receive treatment for injuries she suffered after she struck several vehicles Wednesday night in a north Atchison neighborhood.

Atchison Police Chief Mike Wilson said it was about 10 p.m. Wednesday, Dec. 2 when Ann Huntington was northbound in a 2002 Chrysler passenger car in the 1500 block of Arrowhead Drive when her vehicle struck a parked vehicle. The impact from the initial collision forced the parked vehicle into a second parked vehicle.

The Huntington vehicle then continued and struck three more parked vehicles, Wilson said. The impact of the second sequence then forced one of the struck vehicles into another parked vehicle. Seven vehicles including Huntington’s were damaged as well as a mailbox in wake of the incident.

The investigation is continuing, Wilson said and charges pending as of Thursday, Dec. 3.

Mildred “Mill” Weishaar, center, and her sisters Geraldine Weishaar, left, and Marcelline Weishaar pose for a family photo during their lifetime. Mill is an inspiration for her nephew’s recenlty released book “MillRose — A Century of Family, Farm and Food” by Jim Weishaar.

Jim Weishaar designed the cover for his recently released book.

It was in 2007 when Jim Weishaar opened his deceased Aunt Mill’s recipe box and her legacy that spilled out and brought to life a heritage deeply rooted northeast Kansas family farm traditions.

“It was when I opened that box and memories of her and the family just came out,” Weishaar said. “There were lots of recipes handwritten on scraps of paper and backs of envelopes.”

Weishaar is the son of William and Mary Lou Weishaar, and is a member of the 1986 graduated class of Jefferson County North High School, soon left the family farm in the Nortonville community and left for a spell to pursue a civil service career with the financial management in various federal government departments. His career path took him to Kansas City, Washington, D. C., and Indianapolis, Indiana with the U.S. Department of Defense. In 2013 Weishaar returned back to his home place where he resides his six Labrador-mixed dogs, five brothers and their father. Weishaar currently works with the U.S. Department of Veterans Affairs.

Aunt “Mill” as she was fondly known to Weishaar is his dad’s sister, Mildred.

Sometime after, Weishaar reviewed the contents of Mill’s recipe box he mentioned it and the memories it stirred to his friend and co-worker at the time, Rose who encouraged home to write the collections down to share with others. Rose’s encouragement culminated into his recently published book “MillRose – A Century of Family, Farm and Food.” The book is named for three persons who inspired him, Aunt Mildred, his mother Mary Lou and Rose, Weishaar said in honor of the farm, family and food that has been an integral part of life.

In his younger years it was a long-standing family tradition that his father’s side of the family — the Weishaars, would gather for Christmas and Easter family dinners, Weishaar said. That is from the times many of his memories stemmed from.

The book feature glimpses of the past and seasonal bounties gathered from the farmland and the gardens. Weishaar said his favorite is an angel food cake because Aunt Mill always have one on hand whenever he would drop by for a visit after he left the farm.

“She always seemed to have one in the freezer,” Weishaar said. “She would always give me one.”

Jefferson County Online News posted Mildred F. “Mill” Weishaar’s obituary that indicated she attended St. Joseph Catholic School in Nortonville. She was a seamstress at Horton Garment Factory in Atchison for many years and served as a cook at the youth center and the Village Villa Nursing Home. She tended to the St. Joseph Church Sacristy and taught the Confraternity of Christian Doctrine religion classes to the Nortonville youth.

Weishaar’s Aunt Mill also served as a cook at Bub O’Trimble’s Restaurant in Nortonville, according to the online obituary.

In his book, not only does Weishaar feature his Aunt Mill’s and his mother’s recipes, but some of his own basics along with 40 food preparation hints, methods and tips that he’s learned since he started cooking. They mostly developed by trial and error, Weishaar said his techniques. Sections of the book are organized according to the seasons and features recipes for the fresh fruits and vegetables from the orchards and gardens to the dinner tables. There are sections that focus on preservation and canning, and pet foods. Weishaar’s farm heritage and recollections are integrated throughout the book. Not only is Weishaar’s work in the content, but he designed the book’s cover.

“MillRose” is Weishaar’s first book and is available at Amazon, amazon.com, in both printed and Kindle formats.

COVID-19 has been declared a pandemic by the World Health Organization.

COVID-19 cases across Kansas and in Atchison County have continued to spike considerably in recent days.

According to the Kansas Department of Health and Environment COVID update on Wednesday, there have been 162,061 cases statewide, 5,290 hospitalizations, 1,679 deaths and 669,121 negative tests.

The Center for Disease Control has issued new quarantine guidelines that applies to contacts WITHOUT symptoms. The following was released by the Atchison County Health Department:

7 Day Quarantine (testing and no symptoms)

MUST REMAIN SYMPTOM FREE ON OR AFTER DAY 6 OF EXPOSURE INDIVIDUAL MAY GET A PCR TEST. Make sure that you are getting the correct test, antigen and antibody tests will not be accepted.

If the test is negative and you remain symptom free, you may return to normal activity on Day 8.

If you are still waiting for results on Day 7 you must remain in quarantine until the results are received.

10 Day Quarantine (no testing and no symptoms)

Must remain symptom free for 10 days

All exposed persons should monitor their symptoms for 14 days from exposure and contact their healthcare provider if symptoms develop.

The disease can still develop through Day 14.

Residents in long-term care and assisted living facilities, as well as offender populations in Kansas Department of Corrections prisons, are not eligible for shortened quarantine period.